Disclaimer: The investigators of this study have no financial relationship or any conflicts of interest to report.

Diabetes mellitus is a prevalent ailment in today’s society. There are estimated to be around more than 366 million people affected by this disease worldwide.1 One of its complications is diabetic retinopathy (DR) which is a major cause of blindness throughout the world. Despite this fact, it is still a preventable cause of visual impairment.2

Early detection and treatment of DR are keys to its management elevating the importance of early ophthalmologic evaluation and investigation.3 A local study explored the prevalence of DR among diabetic patients in a tertiary hospital in The Philippines. Among 241 diabetic patients, it was determined that the clinical prevalence of DR was 61.8% and angiographic prevalence was 83.6%, with a 21.8% difference between the two groups.4

Currently, DR is diagnosed clinically by ophthalmoscopy. Further investigation may be done by ancillary procedures such as fluorescein angiography (FA) which explores the vasculature of the retina, one of the main systems affected by this pathology. One of the advantages of FA is that it can detect ischemia, capillary non-perfusion, and edema which are not apparent on ophthalmoscope or fundus photos alone.5,6 Based on most current practice guidelines, FA is not routinely recommended for screening DR patients and is reserved for cases that need further evaluation for unexplained loss of vision or to confirm suspected obscure retinal neovascularization.6 Previous studies also conclude that clinical examination has been considered to have a high sensitivity making it ideal for screening for DR. Furthermore, clinical examination also has a good agreement with FA results in a controlled research setting, further strengthening clinically based diagnosis and management of DR.4,5 Results may still differ in an uncontrolled setting such as with a real-world retina clinic.

To determine the agreement between clinical and fluorescein angiographic staging of DR in a real-world clinical setting, we studied the past medical records of newly-diagnosed DR patients in a retina subspecialty clinic in a tertiary training hospital. This clinic is handled by multiple rotating retina specialists, retina fellows in training, and ophthalmology residents who assess the DR patients and their FA results. Analyzing the disagreements between the two provided us with insight into the occurrence of under-diagnosis and over-diagnosis of a specific stage of DR. Overall, the information gathered for this study may affect current local clinical practice in the diagnosis and management of DR.

This is a retrospective cross-sectional review of medical records conducted at a single retina subspecialty clinic at the Department of Ophthalmology and Visual Sciences of the Philippine General Hospital.

All newly diagnosed cases of DR from January 2014 to December 2015 were included in this study. These patients were seen by an assigned medical retina specialist, fellows in training, and the ophthalmology residents of the clinic. Patients were assessed clinically thru pharmacologically dilated pupils with a 20D lens and an indirect ophthalmoscope. Slit-lamp biomicroscopy with a noncontact lens was not routinely done for the fundus examination of these patients. FA was done using a Topcon TRC 50IX Retinal Camera (Topcon America Corp, USA). Photos of the ETDRS seven standard fields and corresponding angiograms were taken by 1 out of 3 trained technicians. Angiography results were read by 1 out of 11 retina specialists of the same institution. Staging of DR was based on the International Clinical Diabetic Retinopathy severity scale.7 Proliferative DR was also subdivided into early and high risk based on the Diabetic Retinopathy Study.8 Patients who had FA done in a different institution were excluded from this study. Patients were also excluded if there were other ocular findings present that prevented the proper examination of the retina or resulted in poor FA results.

Demographic data such as age and sex were gathered, including the duration as a diagnosed case of diabetes mellitus. The clinical staging of DR at first consult was noted. The FA results were then reviewed focusing on the staging based on the angiographic findings. Patient data were entered into individual data collection forms and were then collated and tabulated.

The approval of the ethics research board of this institution was obtained prior to conducting the study.

Descriptive statistics were used for the demographic data, including the mean age of the patients and ratio between sexes. The kappa coefficient was used to measure the agreement between the DR stage on clinical examination against the FA results. The kappa coefficient measures inter-rater agreement and differs from simple percent agreement since it takes into account the agreement that may occur by chance. A current guideline was used to measure the magnitude of agreement. Online kappa calculators were used to verify the calculations for kappa.10,11 Sensitivity and specificity were also measured using the FA results as the standard. The rates of under- or over- diagnosing DR by stage were also measured.

There was estimated to be around 800 newly diagnosed DR patients from January 2014 to December 2015. At that time 236 patients with DR had undergone FA. Twenty-seven (27) patients had panretinal photocoagulation (PRP) prior to FA and were excluded from the study. Another 15 were excluded due to the presence of other pathologies that prevented the proper assessment of DR. These included cataracts, branch retinal vein occlusion, central retinal vein occlusion, central retinal artery occlusion, vitreous hemorrhage, and age-related macular degeneration. Another 5 patients were excluded due to incomplete records. One hundred fourteen (114) patients were excluded because they were follow-up patients who had undergone repeat FA. For this study, 75 patients (134 eyes) met the criteria and were included for review. 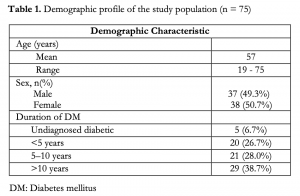 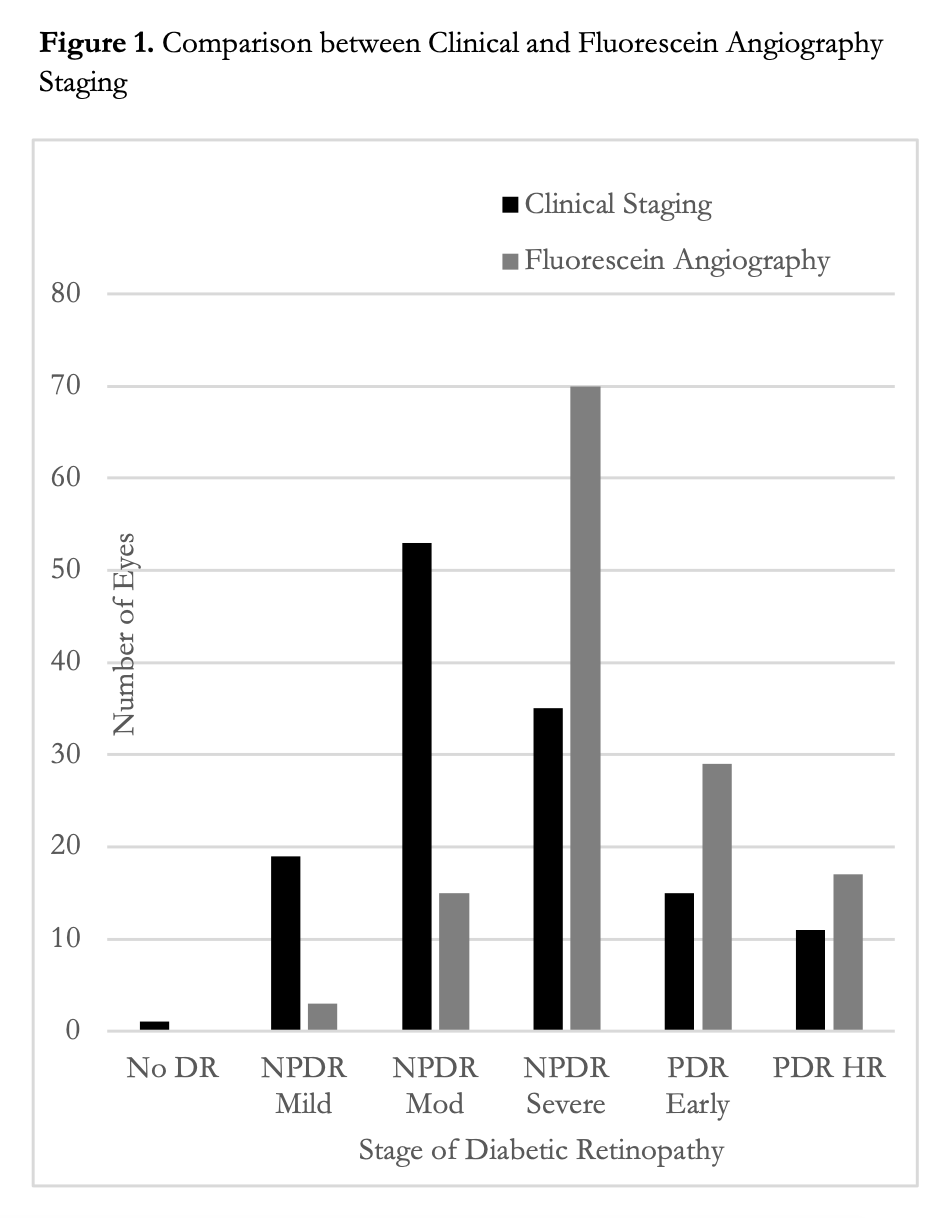 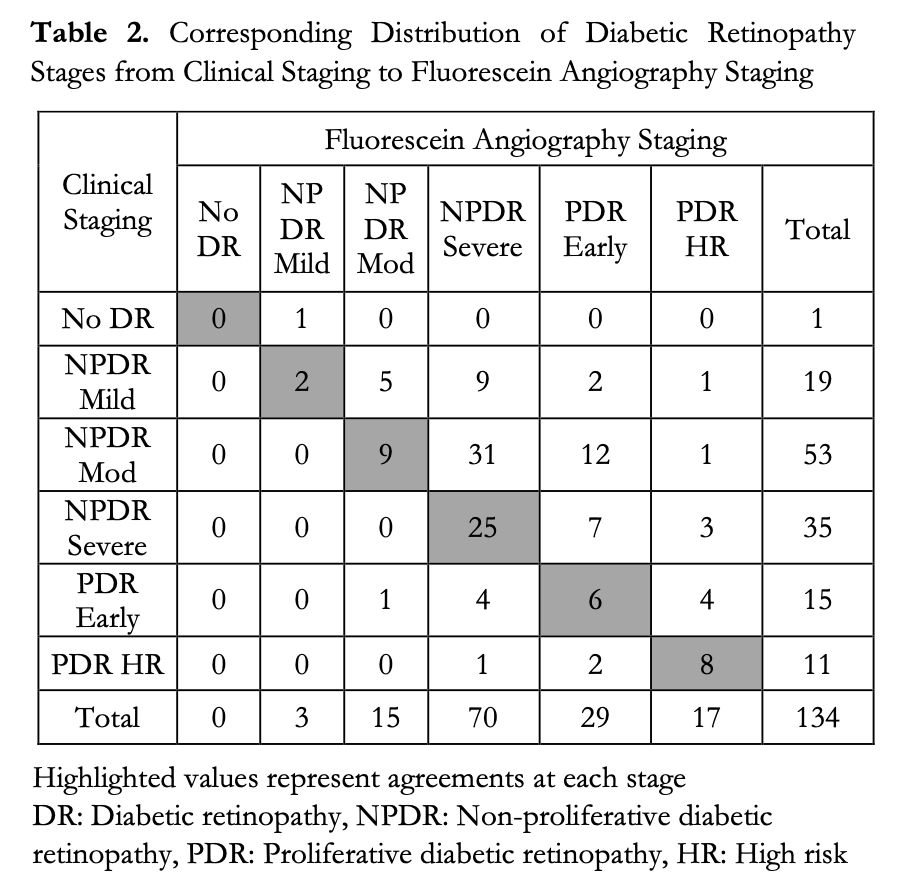 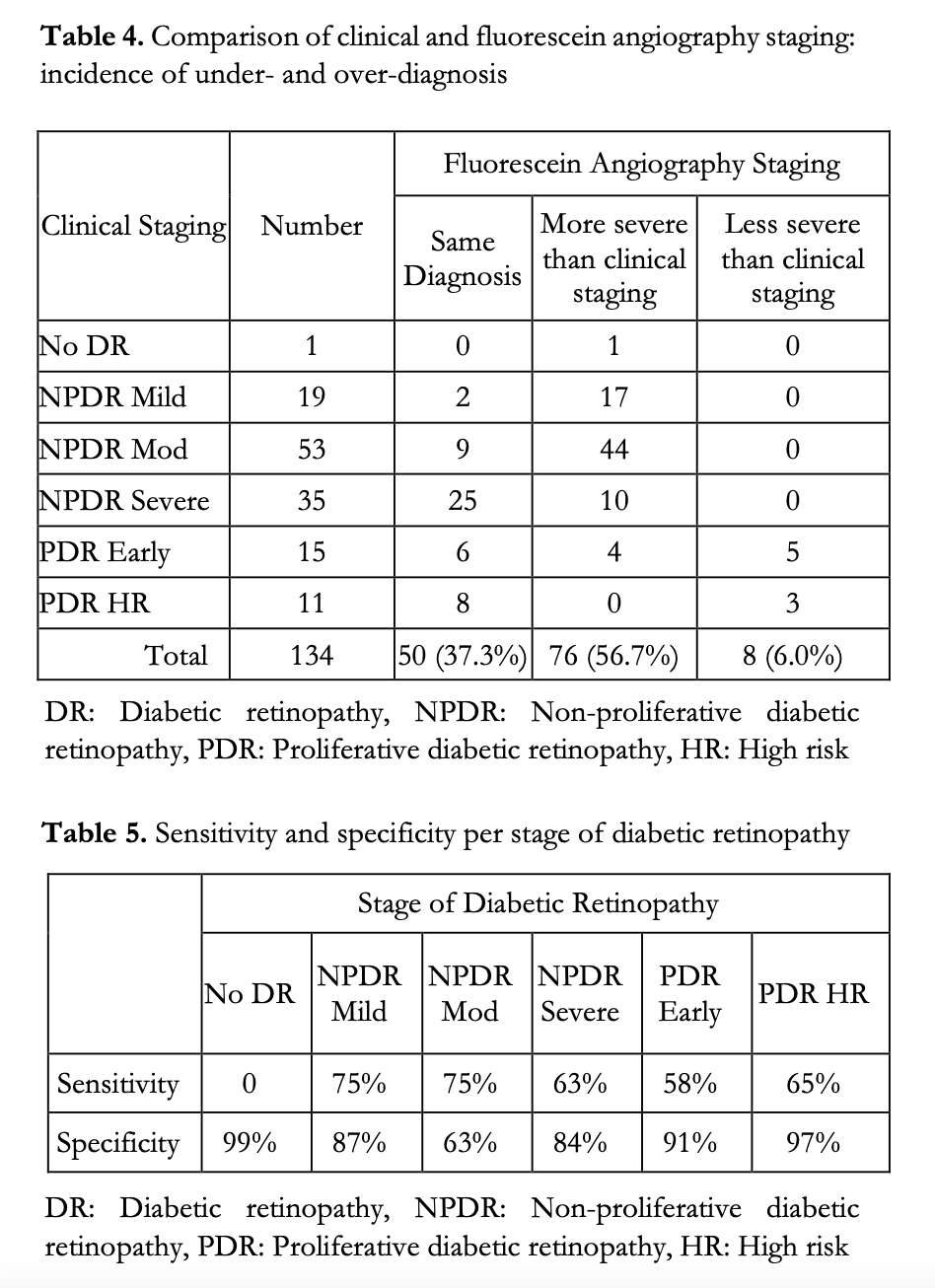 Overall, agreement between the two modalities were only observed in 37.3% of the eyes. More than half or 56.7% of the eyes were under-diagnosed based on clinical examination while 6% were given a higher staging on clinical examination. NPDR severe had the most agreements while NPDR mild is the most under-diagnosed stage and PDR early the most over- diagnosed stage. Of those diagnosed clinically as NPDR mild and NPDR moderate, 63.2% and 82.8% respectively, were staged as NPDR severe or worse on FA. These specific changes in staging may influence the management of these eyes. Based on preferred practice patterns, this would mean that these eyes would have to be followed-up more frequently and may also be candidates for laser photocoagulation treatment.6 For the eyes that were diagnosed as PDR on FA, 56.5% were clinically staged as NPDR severe or less. A similar prospective study by Khalaf et al. in 2007 had a smaller percentage of these patients, with only 26.3% of the PDR eyes clinically staged as NPDR. Their overall agreement between slit-lamp biomicroscopy and FA was 87%, which is significantly higher than the 37.3% of our study. One difference in their study is that they used slit-lamp biomicroscopy with a 78 D lens for the assessment of the posterior pole and a super field lens for the periphery. They found that examination with slit-lamp biomicroscopy had high sensitivity (91.2%) and specificity (97.9%).5 For our study, staging based on clinical evaluation with an indirect ophthalmoscope and 20 D lens had a low sensitivity (58% – 75%) with higher specificity (63% – 99%). These differences may indicate that slit-lamp biomicroscopy with noncontact lenses may be superior to indirect ophthalmoscope with 20 D lenses when evaluating DR. The advantage of using slit-lamp biomicroscopy with noncontact lenses is the higher magnification it provides which enables the examiner to visualize small or thin
vascular changes. Indirect ophthalmoscopy with a 20 D lens provides a wider field of view with less magnification but may also provide a better view of the far periphery of the retina.

Another key difference with Khalaf’s study is that FA was done for all their patients.5 FA was not routinely done for all DR patients in our study. This reflects what occurs in a real-world setting and may be consistent with preferred practice patterns which recommends FA for further investigation of obscure vascular changes, ischemia, or as a guide for treatment.6

Clinically, the distribution of cases in order of increasing frequency in our study are as follows: No DR, PDR early, PDR HR, NPDR mild, NPDR severe, and NPDR moderate. Based on FA results, the distribution in increasing frequency are as follows: No DR, NPDR mild, NPDR moderate, PDR HR, PDR early, and NPDR severe. Based on our data, it seems that the more advanced stages of DR are diagnosed on FA, which may indicate that vascular changes associated with advanced stages of DR are more apparent on FA.

Our study is limited by its retrospective nature. FA and slit-lamp biomicroscopy with noncontact lenses were not routinely done for all DR patients in the clinic. There was no data available on the specific indications for performing FA on each patient. It was not determined if FA had been done as a baseline examination, to explore unexplained vision loss, or to uncover obscure neovascularization suspected on clinical evaluation. As such, the poor correlation between staging on FA and clinical evaluation, as well as the lower sensitivity and specificity of indirect ophthalmoscopy does not necessarily equate to poor clinical evaluation.

Conducting a similar study with a prospective design that includes all diagnosed DR patients may give us a clearer picture of the agreement between these modalities in a real-world setting. Determining the specific indications for FA in these patients may also influence practice patterns in this institution. Determining the accuracy of using slit-lamp biomicroscopy with noncontact lenses and indirect ophthalmoscopy with a 20 D lens in staging DR may also be beneficial especially for certain training institutions or other institutions who may lack specific equipment and specialists. Additionally, determining the efficiency of using both of these techniques may also be an important factor for some institutions who cater to a large volume of patients.

In conclusion, there was a poor agreement between the clinical and angiographic staging of diabetic retinopathy in this single training institution. NPDR severe had the most agreements between the two modalities while NPDR mild was the most under-diagnosed stage, and PDR early the most over-diagnosed stage. There was a tendency to assign a less severe stage of DR on clinical evaluation with indirect ophthalmoscopy and a 20 D lens compared to FA. Clinical evaluation also had low sensitivity but high specificity in staging DR.