Disclosure: Harvey S. Uy has received research funding from Santen, Inc. The other authors report no conflicts of interest in this work.

Cataract surgery is the most commonly performed ocular surgery in the world. Endophthalmitis, a rare but devastating sight- threatening postoperative complication of intraocular surgery, is characterized by microbial- induced inflammation within the intraocular cavity. Approximately 90% of endophthalmitis cases occur following cataract surgery with an incidence rate ranging from 0.08 to 0.7%.1,2

Aseptic technique, preoperative topical povidone-iodine, and antibiotic prophylaxis are crucial for endophthalmitis prevention.3 A variety of measures can be employed as chemoprophylaxis against bacterial endophthalmitis including topical or subconjunctival antibiotics administered before, during or after surgery. Unsettled issues include questions like which antibiotic and/or route of administration would provide the most effective and safest protection. Traditionally, topical antibiotics are administered before and/or after surgery and subconjunctival injection of antibiotics is given at the end of the surgery. Recent evidence from one large clinical trial and several observational studies supports the safety and efficacy of intracameral antibiotics for preventing postoperative endophthalmitis.4-8 In a survey, the American Society of Cataract and Refractive Surgery (ASCRS) reported that 50% of 1,147 global respondents were injecting intracameral antibiotics at the conclusion of surgery.9

Recent years have witnessed the increased utilization of fluoroquinolones, such as besifloxacin, gatifloxacin, levofloxacin and moxifloxacin, for prevention of postoperative infection. Levofloxacin and moxifloxacin are commercially available as preservative-free eye drops and are approved for the treatment of bacterial conjunctivitis. They are broad-spectrum antibiotics that are active against many gram-positive and gram-negative bacteria, including the majority of the causative organisms of post-cataract surgery endophthalmitis.13 Both fluoroquinolones act by inhibiting bacterial DNA gyrase and topoisomerase IV.18 An additional advantage of moxifloxacin and levofloxacin over cefuroxime is their drug kinetics. While the bactericidal activity of cefuroxime is time-dependent, moxifloxacin and levofloxacin are concentration-dependent which, if given as a bolus at the end of the cataract surgery, may lead to a more effective eradication of bacteria.6,19 We elected to study these two particular drugs because they are both widely distributed and are available as preservative-free eye drops. This means the drug can be directly extracted from the eye drop bottle and placed into the anterior chamber without the need for reconstitution or other processing. This makes for an efficient method of preparing and delivering an anti- bacterial regimen at the end of cataract surgery.

Early data support the safety and efficacy of both preservative-free moxifloxacin and levofloxacin as intracameral chemoprophylaxis.4,7,17,19-26 However, there are no studies that compare these two antibiotics head-to-head. This study was designed to evaluate and compare ocular safety outcomes associated with the use of either intracameral moxifloxacin or levofloxacin in patients undergoing routine phacoemulsification.

This was a single-center, prospective, double- masked, randomized, interventional study which enrolled patients older than 21 years of age, with visually-significant cataracts who underwent uncomplicated phacoemulsification and in-the-bag intraocular lens (IOL) at the Peregrine Eye and Laser Institute, Makati, Philippines from January 2 to April 28, 2018. Only one study eye per patient was included in the study. Patients who had other ocular pathologies such as corneal opacities, corneal dystrophies, glaucoma, uveitis, retinopathy, optic neuropathy, concomitant infection (blepharitis, hordeolum or conjunctivitis) or uncontrolled systemic disease were excluded from the study. Eligible patients were provided a copy of the study protocol during the preoperative clinic visit and an explanation of the study protocol and processes. Those who voluntarily provided consent were enrolled in the study. The study protocol and informed consent forms were approved by the Peregrine Eye and Laser Institute Institutional Review Board (PELI-IRB). All patients provided signed written informed consent for participation in this study. The study was performed in accordance with Good Clinical Practices and the Declaration of Helsinki.

As preoperative preparation, proparacaine (Alcaine, Alcon Laboratories, Fort Worth, TX, USA) and 5% povidone iodine solution were placed into the conjunctival cul-de-sac. Povidone iodine 10% paint was applied to the eyelids and periorbital skin. Standard, temporal-approach phacoemulsification through a 2.2mm clear corneal incision was performed by a single surgeon (HSU) using chopping techniques and a single phacoemulsification machine (Centurion, Alcon Surgical, Fort Worth, TX, USA). A single-use ophthalmic viscoelastic device (OVD) (Discovisc, Alcon Surgical) was utilized for all cases. Each eye was implanted with one (of a variety) of single-piece acrylic IOLs, which were placed into the capsular bag using an assisted injection technique. This was followed by aspiration of all remaining OVD and reformation of the anterior chamber (AC) with balanced saline solution injected via side port. After securing a stable and formed AC, 0.5mg in 0.1ml of the intracameral antibiotic in the form of 0.5% moxifloxacin (Vigamox, Alcon Laboratories) or unpreserved 0.5% levofloxacin (Oftaquix, Santen, Osaka, Japan) was injected via side port. The eyelid retractors were removed and a drop of the same antibiotic, plus 1% prednisolone acetate (Pred Forte, Allergan Inc., Madison, NJ, USA), was instilled into the conjunctival cul-de-sac.

Statistical analyses were performed with Graphpad Prism statistical software version 6.01 (Graph Pad Software, La Jolla, CA, USA). A paired t-test was applied to test the significance of differences between means of the two groups. A P value <0.05 was considered to indicate a statistically significant difference.

Repeat measurements taken during the post- operative visits day 1, week 1 and month 1 are shown in Table 2. Between-group comparisons showed no significant differences in the means of ECD, CCT, CRT and MV at all study visits. 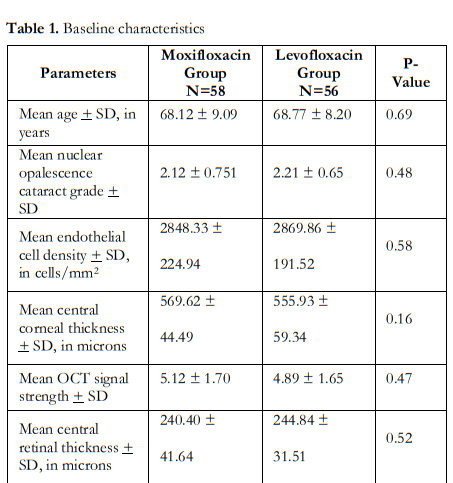 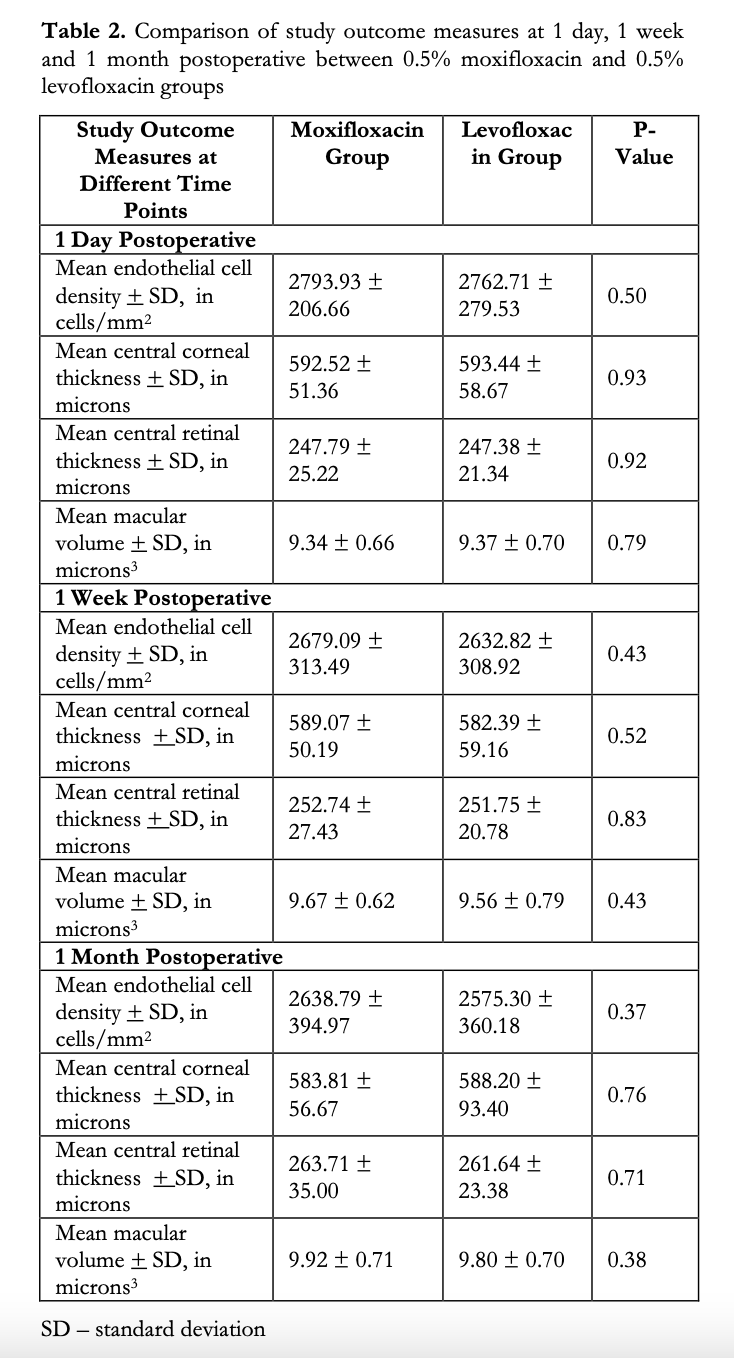 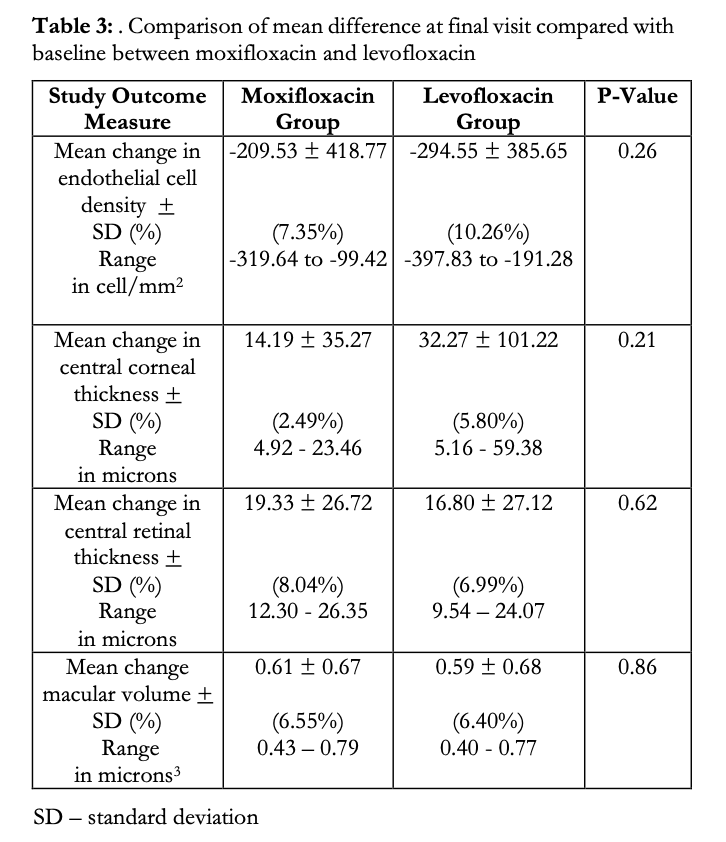 Lastly, there were no study-related adverse events observed during the course of the study. There were no cases of intraocular hypertension, cystoid macular edema, toxic anterior segment syndrome or endophthalmitis.

In 2007, a study by Espiritu and others demonstrated the safety of intracameral moxifloxacin administered at the end of the surgery.20 The authors found it non-toxic to the parameters of visual rehabilitation, anterior chamber reaction, pachymetry and corneal endothelial cell density. Since then, several other studies have shown further evidence on the safety of intracameral moxifloxacin in human eyes undergoing cataract surgery.4,7,21,23,25

On the other hand, there is only one published study on the ocular safety of intracameral injection of unpreserved levofloxacin post cataract surgery. In 2017, Espiritu and Bolinao investigated the ocular safety of intracameral levofloxacin in 50 eyes of 50 patients who underwent phacoemulsification and IOL implantation; they reported no safety concerns in terms of visual acuity, endothelial cell count, degree of anterior segment inflammation and central foveal thickness associated with intracameral injection of levofloxacin 0.5% prophylactically following cataract surgery.17

These results are in line with an earlier preclinical study by Kim et al., where the authors compared the toxicity of intracameral moxifloxacin and levofloxacin, along with cefazolin in rabbit eyes. They concluded that intracameral injections of all three studied antibiotics were safe and non-toxic for surgical prophylaxis.22

This study compared postoperative outcomes of intracameral administration of preservative-free moxifloxacin and levofloxacin. We found no significant differences in postoperative ocular safety outcomes between the two treatments groups following intracameral prophylactic use of either agent. We assessed postoperative changes in ECD, corneal thickness, macular volume and CRT to determine the safety of intracameral moxifloxacin versus levofloxacin on the anterior and posterior segments of the eye. In terms of changes in the ECD, our study findings show a 7.35 and 10.26% decrease at 1 month postoperative, compared to baseline in the M and L groups, respectively. This is within the range of reported reduction in ECD (4.8-11%) at 1 month following phacoemulsification.28-31

Posterior segment effects of phacoemulsification have been measured using changes in CRT and retinal volume. Release of pro-inflammatory mediators, light damage and vitreoretinal traction are some factors hypothesized to contribute to the breakdown in the blood-retinal barrier, resulting in increased retinal thickness and, when severe, cystoid macular edema. Macular thickness and volume have been reported to progressively increase up to 6 months following cataract surgery.34-37 These increasing trends in CRT and retinal volume were also observed in this study. However, qualitative examination of our OCT images did not show development of intraretinal cysts that would suggest cystoid macular edema.

Despite changes in the corneal and retinal parameters used in the study, these changes were not unexpected and were consistent with several previous studies. In addition, no significant differences were observed in the ocular parameters between the 2 treatment groups at baseline and at 3 postoperative visits. Our results suggest that intracameral application of preservative-free levofloxacin and moxifloxacin is equally safe when used as postoperative antibacterial prophylaxis among eyes undergoing cataract surgery. Their similar safety profiles may be attributed to near identical chemical properties. Oftaquix (based on levofloxacin) has a pH of 6.2-6.8 and osmolality of 300 mOsm/L, while the values for Vigamox (based on moxifloxacin) are 6.8 and 290 mOSm/L, respectively.22

Lastly, we observed no study-related adverse events during the course of the study. No study eye developed elevated intraocular pressure, corneal decompensation, cystoid macular edema, toxic anterior segment syndrome or infectious endophthalmitis. It is recognized, however, that this study was not originally designed to detect the rare occurrence of post-cataract surgery infectious endophthalmitis.

A key strength of our research is the prospective study design. Randomization and masking were employed to minimize the risk of bias. This is also the first study to compare intracameral preservative-free moxifloxacin and levofloxacin head-to-head using 4 standard ocular safety parameters. We assessed the possible ocular toxic effects of the 2 drugs, not only on the anterior segment, but also on the retina. Our study findings add to the growing evidence on ocular safety of the off-label use of intracameral injection of preservative-free moxifloxacin and levofloxacin. The main limitations of our study were the sample size and short duration of follow-up. This study also did not assess other measures of corneal endothelial damage, such as hexagonality and corneal volume, nor was it sufficiently powered to evaluate the efficacy of both drugs in the prevention of endophthalmitis. Therefore, we propose larger studies with longer follow-up duration to detect possible differences not captured within our study population. An area for further research is comparison of cost effectiveness of postoperative antibiotic eye drops versus intracameral antibiotics alone.

The authors would like to thank Rheamel Navarro for assistance with statistical analyses.