Disclosure: The authors have no financial disclosures to report.

Adequate visualization of the surgical field is vital in performing ophthalmic surgeries. In certain glaucoma surgical procedures, such as trabeculectomy or glaucoma drainage device implantation, adequate exposure of the bulbar conjunctiva is essential. This is commonly done using a corneal traction suture that is anchored opposite to the suture site by a Kelly forceps or an adhesive tape (Figure 1). This method does not provide consistent traction nor allow adjustment of exposure once set. The suture also has a tendency to slip and lose tension during surgery. There is a constant need for re-application of the anchor, and the amount of tension applied is not adjustable once fixed. These shortcomings can result in surgeons’ frustration and prolonged surgery.

There are few published reports that offer workable alternatives to address this problem. Grehn and Klink described a method using a modified speculum, with exposure site limited to the upper quadrant and downward gaze was limited compared with the conventional method.1 Hill used Tenon’s traction sutures in addition to the corneal traction sutures, enhancing visualization but this was useful only for limbus-based peritomies.2 Compared to corneal traction, the use of superior rectus traction in trabeculectomies had lower success rates.3

A traction suture holding device prototype was designed and developed. A sketch of the initial design was made. Two proofs-of-concept devices were created and tested. The first one was made with Sintra board (Figure 2) and the second was a wooden prototype (Figure 3). The final working prototype was assembled using plastic bricks (Lego, Billund, Denmark), a metal screw, and a metal clip (Figure 4). 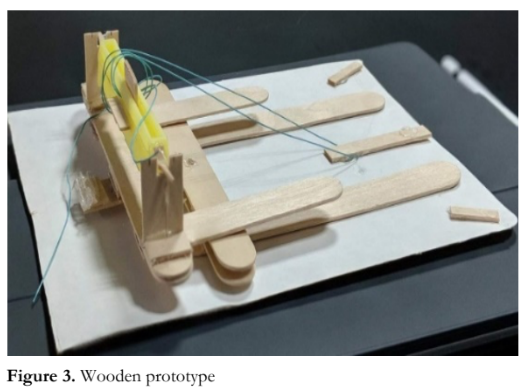 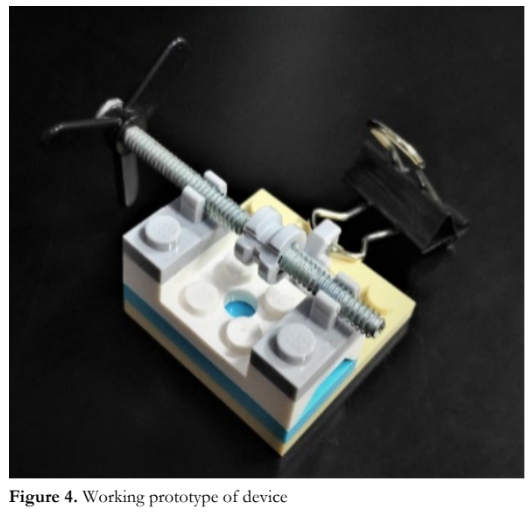 The final working prototype was employed on actual glaucoma surgeries, including trabeculectomies and glaucoma drainage device implantations performed by a single surgeon. The device was evaluated based on adequacy of exposure, need for re-adjustment, and overall success. Adequate exposure was achieved if the desired level of exposure was comparable to the traditional method, and inadequate exposure if the traditional method provided better visualization. Overall success was achieved if the traction suture holding device functioned as intended without the need to revert to the conventional method of applying traction.

The novel surgical technique employed a peripheral lamellar trans-corneal suture (Figure 5). A knot was created on the two free ends of the traction suture (Figure 6). The device was positioned opposite to the desired site of exposure and secured in place by fastening the clip to the surgical drape (Figure 7). The traction suture was winded along the groove of the traction suture holding device (Figure 8). Tension was applied by turning the screw counterclockwise to achieve the desired amount of exposure of the surgical field (Figure 8); while traction was released by turning the screw clockwise. 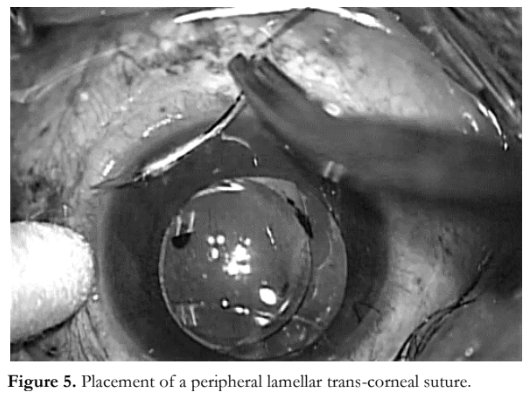 This novel surgical technique of applying corneal traction to achieve adequate exposure of the surgical field was utilized in 9 glaucoma procedures: 5 trabeculectomies and 4 glaucoma drainage device implantations. In all 5 trabeculectomies, the peripheral lamellar corneal traction suture was placed at the 12 o’clock position. For the glaucoma drainage device implantations, half of the traction sutures were placed superotemporally and the other half inferotemporally. In all cases, the device provided adequate exposure and allowed adjustment of the amount of traction during surgery (Table 1). No complications observed. 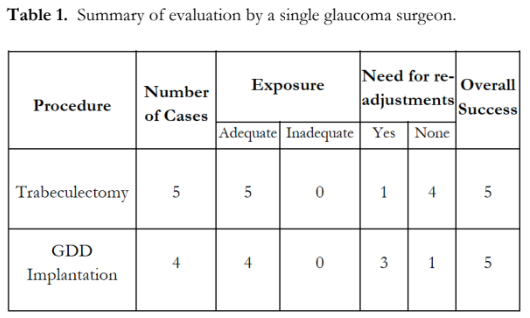 Trabeculectomy and glaucoma drainage device implantation are the mainstays in the surgical management of glaucoma. Adequate exposure of the surgical site during these procedures is crucial and the use of traction sutures for exposure has helped facilitate these surgeries. However, each method has its own limitation.

The technique presented here was developed to address some of the difficulties with the current exposure methods used. Muscle traction sutures have been shown to have a negative influence on the outcomes of trabeculectomies, and the consistency of exposure with corneal traction sutures was lacking. With this technique, adequate exposure of the surgical site with no to minimal re-adjustment of retraction was achieved.

The use of the device allowed the traction suture to be anchored to the cornea instead of the conjunctiva or muscle. The surgeon chose the specific placement of the device for the desired exposure site, with the ability to vary the amount of traction being applied throughout the course of the surgery. The contact point of the screw to the device provided enough friction to hold and sustain the tension.

The main limitation with this technique was the availability of the device. Instrument manufacturers have been contacted and 3D printing manufacturing techniques are being explored for possible mass production.

This technique was easily learned and did not present any specific risk. Further evaluation by different users would be helpful in determining its adaptability for mass use.