CENTRAL serous chorioretinopathy (CSC) is characterized by accumulation of exudative fluid under the neurosensory retina resulting in a circumscribed area of retinal detachment. 1-2 Retinal-pigment-epithelium (RPE) hypersecretion, RPE layer discontinuity, choroidal hyperpermeability, and choroidal-circulation abnormalities are pathologic mechanisms in the development of CSC. 3-7 Most cases of CSC resolve spontaneously within 4 months; however, certain patients experience recurrent or persistent CSC and prolonged visual disturbances. Focal laser photocoagulation (FLP) can reduce leakage and promote resolution of subretinal fluid, resulting in faster anatomic and visual recovery. 8-10 However, choroidal neovascularization (CNV), inadvertent photocoagulation of the fovea, and juxtafoveal scotoma formation are potentially harmful complications of laser photocoagulation. 6, 11 Photodynamic therapy (PDT) has been shown to be effective in treating CSC in a small series of patients. PDT is believed to resolve choroidal hyperpermeability while sparing neuroretinal tissue from thermal damage. 12-13 However, patient access to PDT is limited due to the high cost of photosensitizing drug verteporphin. Transpupillary thermotherapy (TTT) is a treatment modality for subfoveal CNV in age-related macular degeneration. TTT has similar therapeutic effects as PDT, like reduction in angiographic leakage from CNV. 14-16 When subthreshold levels of TTT energy are used, only minimal changes in the human retina are observed. 17-19 Because of its ability to induce choroidal vascular changes and spare the human retina from thermal damage, TTT is a potential treatment for CSC. We report here our results using TTT for chronic CSC.

METHODOLOGY
Nine patients with persistent CSC of a least 4 months’ duration were examined at the Asian Eye Institute (AEI) from December 1, 2002 to April 1, 2004. Of these, we excluded 5 patients with a history of prior ocular disease, steroid intake, or previous laser treatment. We also excluded patients with leakage sites within half-an-opticdisc diameter of the optic-nerve head. Best-corrected visual acuity (BCVA), slitlamp biomicroscopy, non-contactlens fundus examination, automated visual-field testing (VF), and indirect ophthalmoscopy were performed during each visit. The diagnosis of active CSC was confirmed by fluorescein angiography (FA) during the initial visit. FA was performed every 2 months while subretinal fluid was clinically visible. Informed consent was obtained from each patient prior to the start of the study. The AEI Institutional Review Board approved the study protocol and informed-consent form. Of the 4 patients enrolled in the study, 3 were male. The mean age was 44 years (range, 30 to 56). The mean duration of illness was 10 months (range, 7 to 16). Two of the 4 patients had juxtafoveal lesions and 2 had extrafoveal lesions. Two patients had fibrin within the area of neurosensory detachment. One patient (Case 3) had an inferior retinal detachment. The individual patient characteristics are detailed in Table 1. A 810-nm diode laser (Oculight SLX, Iridex Corp, Mountain View, CA) was used to deliver laser energy through a slitlamp-mounted large spot adapter. A single one-minute continuous pulse was applied with a powerdiameter ratio of 100 mW/mm2 . All treatments were applied through an Area Centralis Fundus/Laser Lens (Volk Optical Co, Mentor, OH, USA). The treatment area was set at the large spot adapter setting (0.5, 0.8, 1.2, 2.0, or 3.0 mm2 ) closest to but larger than the measured greatest linear diameter of the angiographic leakage site as measured by the imaging software of the fundus camera (ImageNet 2000, Topcon, Japan). VF was done using an Octopus 101 perimeter (Haag-Streit AG, Koeniz, Switzerland). The patients were followed up monthly for the first 3 months, then quarterly once the lesion had resolved. For nonresolving lesions, FA was repeated every 2 months; repeat TTT was performed using a power-diameter ratio 10% greater than the initial dose. Main outcome measures were: frequency of successful CSC resolution, resolution time, number of treatments, best-corrected visual acuity (BCVA), VF and treatment-related complications. The mean follow-up period was 9 months (range, 5 to 14).

RESULTS
Three of the 4 eyes experienced complete resolution of CSC within 1 month of a single treatment while 1 eye resolved after 6 months and 3 TTT treatments (Case 3). The mean number of treatments was 1.5 ± 1.0. BCVA improved in 2 eyes and remained the same in the other 2. VF showed decrease in scotoma size associated with the disappearance of the neurosensory detachment. No patient experienced VF worsening or other treatment complications (Table 1). 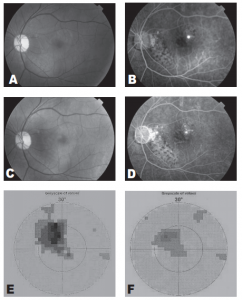 The macular detachment resolved 1 month after treatment with recovery of BCVA to 20/20. Repeat VF showed disappearance of the central scotoma. No field defects developed at the site of treatment. There was a residual Seidel scotoma that corresponded to an area of RPE atrophy and not to treatment site (Figure 1).

Case 3
A 30-year-old male trauma-service nurse developed CSC in the left eye 2 years before consultation and had undergone focal laser photocoagulation of juxtafoveal leakage site resulting in a central scotoma. A year before consultation, the patient experienced mild visual distortion in the right eye which persisted. Dilated retinal examination and FA revealed a well-circumscribed macular detachment containing fibrin, inferior retinal detachment (RD), and a temporal extrafoveal leakage site. VF showed a superior scotoma corresponding to the inferior RD. TTT was of fered to resolve CSC without producing a central scotoma. Three TTT treatments were applied over a four-month period (Table 1). Six months after TTT, the macular detachment, fibrin, and inferior retinal detachment had completely resolved. Repeat VF showed reduction in central scotoma; however, there was persistence of the superior arcuate scotoma corresponding to the area of the RD, possibly indicating delayed recovery of neurosensor y retinal function (Figure 2). 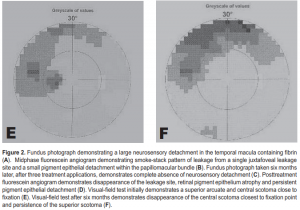 DISCUSSION
CSC is a maculopathy characterized by focal serous detachment of the neurosensory retina and RPE. While most cases spontaneously resolve within 2 to 3 months, prolonged pigment epithelial detachment or subretinal fluid may lead to permanent visual-acuity loss and visual disturbances. 23 FLP can shorten the clinical course and hasten visual recovery. 8, 9 It can also improve final visual outcome and prevent recurrences. 10 However, FLP of subfoveal and juxtafoveal leakage sites can cause loss of contrast sensitivity and sight-threatening complications such as juxtafoveal scotoma, subfoveal laser scarring, and CNV. 24, 25 Extrafoveal FLP and PDT are less damaging treatment alternatives. 12, 26 The 810-nm, near-infrared laser beam used in TTT is mainly absorbed by the choroidal melanocytes and RPE melanin and is poorly absorbed by retinal tissues and hemoglobin. 20-22 Because of these characteristics, TTT is theoretically advantageous for treating CSC because the pathology of CSC is believed to be at least in part due to RPE hypersecretion and choroidal hyperpermeability. 3-7 TTT produces dose-dependent biological and angiographic effects primarily within the pigmented layers of the eye. It has been clinically and experimentally shown to induce a variety of local-tissue changes that lead to involution of CNV and reduction of subretinal exudation. These effects are believed to be partly mediated by choroidal expression of heat shock proteins causing apoptosis of endothelial cells and vascular thrombosis. 22, 27 TTT causes an increase in biological-tissue temperature of 8 to10° Celsius in comparison to conventional FLP, which produces larger temperature increases of 40 to 60° Celsius. The relatively small increase in tissue temperature using TTT is believed to spare the neurosensory retina from thermal damage. 19, 22 In this small series, all CSC patients experienced closure of leakage sites. No patient experienced thermal-related treatment complications such as scar or scotoma formation. TTT induces vascular changes similar to PDT such as transiently reduced retinal-blood flow, increased choroidal-vascular leakage within 1 hour after treatment and disappearance of choroidal leakage 1 to 2 weeks after treatment. 15 Compared with PDT, TTT avoids photosensitizerrelated complications such as skin burns. TTT is cheaper since an expensive photosensitizing dye is not used. The complications of TTT for CNV treatment are dose-dependent and include macular burn, hemorrhage, RPE tear, progressive subretinal fibrosis, vascular proliferation, and RPE atrophy. The amount of tissueabsorbed laser energy is affected by laser power, treatment duration, media clarity, and skin pigmentation. 17-19 The inability of clinicians to accurately titrate the amount of absorbed laser energy remains an important limitation of TTT treatment. The power-diameter ratios used in this study were carefully chosen to deliver a subthreshold dose and prevent thermal damage. None of the patients developed a clinical thermal response during treatment. The study design used in this work does not allow comparison to the natural course of CSC or to other treatments. In summary, the results of this pilot study suggest that subthreshold TTT may be a safe and effective treatment for chronic CSC. These encouraging results justify conducting a larger, masked controlled trial to determine the safety and effectiveness of TTT compared with other treatment methods.