Quality of life (QoL) questionnaires measure the impact of disease or treatment on a patient’s life and self-esteem, performance in daily living activities, social interactions, emotional well-being, and independence.1,2 In addition, disease-specific QoL questionnaires help determine problems of children in life or in school, and at the same time help educate parents regarding their own health-seeking behavior and management.3,4 Several studies found a correlation between the degree of visual impairment of children and their perceived QoL, such that children with more severe visual impairment have lower perceived QoL.2,5-8

Among these, the CVFQ was developed as an assessment tool to determine the QoL of visually impaired children aged 0 to 7 years old.11 The CVFQ is administered to parents or caregivers of patients with visual impairment, and consists of questions that tackle several subscales, particularly: general health, general vision, competence, personality, family impact, and treatment difficulty (see Appendix 1). These questionnaires, however, could not be used immediately in its present form in the local setting due to sociocultural and economic differences between the Philippines and the western population. Studies are needed to validate if these questionnaires can be used locally.

According to a study by Wittenborn and colleagues,12 the total economic burden resulting from vision loss and eye disorders in persons younger than 40 years old (2.16 million persons) in the United States in 2012 is estimated at $38.2 billion. $5.9 billion of which is attributed to children (857,000 persons). In the Philippines, there is no data available regarding the prevalence of childhood visual impairment and its burden on affected children, their families, and on society. Based on the 2015 census of the Philippine General Hospital alone, there were 4,330 patients seen by the Pediatric Ophthalmology Service, most of which are cases of errors of refraction, strabismus, OPHTHALMOLOGYcataracts, and amblyopia. However, there is no local study done at present that will determine the QoL of these children suffering from visual disabilities, or the impact of these disorders on these children and their families. Determining the impact of these childhood visual impairment is important in cost-effectiveness and cost-benefit research, such as justifying the need for screening programs to catch these diseases earlier in their course, when treatment can make more substantial impact.1,13

The objectives of this study were to translate the CVFQ for children 3 years and above (CVFQ3plus) into Filipino, and to validate the translated CVFQ3plus to be used locally to assess the QoL of Filipino children aged 3 to 7 years old with visual impairment. Only the CVFQ3plus was translated into Filipino, as children in the 3 to 7-year-old age engage in more independent activity, and visual impairment at this age may greatly affect their QoL.

The study conducted was a single-center, non-randomized translation and validation study.

The CVFQ3plus translation into Filipino involved translation, reconciliation, pretesting, and small group discussion, based on the KIDSCREEN Group Translation and Validation procedure.14 The original version of the CVFQ3plus (Appendix 1) was translated into Filipino using the forward-backward-forward method. The initial translation (forward translation) into Filipino was done by an independent translator, who is proficient in both Filipino and English languages. A second translator, also proficient in both languages and has not worked with the CVFQ3plus, translated the questionnaire back into English. The translated and back-translated versions of the questionnaire were compared item by item by a team composed of the investigator and the translators, who were all well-versed in both the English and Filipino language. The same team suggested a final version for the final forward translation. The discrepancies were resolved between the versions until a final forward translation was produced, with no discrepancies between the English and the Filipino versions of the CVFQ3plus (Appendix 2). The translation process was done with the help of the Sentro ng Wikang Filipino of the University of the Philippines Manila.

Participants were excluded from the study if they were parents or primary caregivers of patients who were less than 3 and more than 7 years old at the time of test administration, unable to read, write, and converse in conversational Filipino, and were not willing to sign the informed consent form.

Participants who fulfilled the inclusion criteria were asked to sign an informed consent form prior to the conduct of the study. The parents’ or primary caregivers’ name, age, and educational attainment were obtained, as well as the age of their child with visual impairment, and the BCVA and ophthalmologic diagnosis of their child. A group of parents or primary caregivers whose children aged 3 to 7 years old, and have BCVA of 20/40 or better on both eyes, was recruited from the General Clinic and Pediatric Ophthalmology Clinic, and was used as a control group.

All patients underwent complete ophthalmologic examination, including determination of the visual acuity using either the LEA chart or HOTV chart, prior to the administration of the Filipino and English versions of the CVFQ3plus to their parents or caregivers.

The participants who fulfilled the inclusion criteria answered both the Filipino and the original English versions of the CVFQ3plus. This was done to determine if their answers will differ based on the version used, and to assess the need for a Filipino version of the CVFQ3plus. They were also asked to perform a self-rating of their English proficiency using a 10-point scale, with 10 representing perfect proficiency. The selection of which questionnaire to administer first was done randomly using a flip-coin technique. After the administration of the test, the participants were interviewed regarding their thoughts on both questionnaires, and whether they understood or preferred the questionnaire in Filipino or in English. Participants can withdraw anytime from the study.

The study was conducted after approval from the hospital’s ethics review board and was conducted with adherence to the tenets of the Declaration of Helsinki.

Based on the minimum required sample size to validate questionnaires of number of questions multiplied by 3, a sample size of at least 120 was required for this study. Chronbach’s Alpha with a 95% confidence interval was used to determine the validity and internal consistency of the Filipino version of the CVFQ3plus questionnaire. An Alpha score of less than 0.6 was considered fairly reliable, scores of 0.6 to 0.8 was considered as moderately reliable, and scores greater than 0.8 was considered as highly reliable. Chronbach’s Alpha analyses of the overall instrument, as well as the Alpha analysis when each item is removed, were computed to determine whether a particular item affected the overall reliability and internal consistency of the translated CVFQ3plus questionnaire. The same calculation was done for the English version of the CVFQ3plus for comparison.

The overall Chronbach’s Alpha value computed for the Filipino version of the CVFQ3plus and its comparison with the English version was 0.86 and 0.90, respectively (Table 1). The specific Alpha scores when each item is removed for both versions are presented in Table 2. Results show that the translated version is highly reliable and is comparable to the English version. Furthermore, the Alpha scores when each item is removed in both the English and Filipino versions show high internal consistency. No single item pulled the overall Alpha score in either direction. 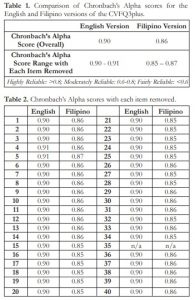 Table 1. Comparison of Chronbach’s Alpha scores for the English and Filipino versions of the CVFQ3plus.

Quality of life (QoL) questionnaires aim to measure aspects of diseases that are not quantifiable by medical science. The CVFQ is a vision-specific quality of life questionnaire designed for caregivers of children aged 0 to 7 years old.11 The questionnaire determines the QoL of visually-impaired children in different aspects: general health, general vision, competence, personality, family impact, and treatment difficulty. Both versions of the CVFQ (CVFQ3plus and CVFQ3min) have moderate to high internal consistency, with slightly higher Chronbach’s Alpha scores for CVFQ3plus.11 In addition, the CVFQ is only minimally affected by factors other than the effects of vision problems, with Rasch analysis scores correlating well with vision deficits and the total CVFQ scores, especially among patients with moderate to severe visual impairment. In another study by Birch et al.,4 the construct validity of the CVFQ subscales was evaluated on 4 different clinical situations: unilateral versus bilateral visual impairment, differences in severity of visual impairment from a single ophthalmic condition, differences in treatment difficulty, and differences in treatment of the same ophthalmic condition. They found that the CVFQ effectively measured meaningful differences in these situations.

Although the CVFQ has been found to be reliable in assessing QoL of visually-impaired children, using the English version of the CVFQ may not be easily applicable to the Philippine setting. A reliable instrument is defined as an instrument that can measure a construct consistently regardless of time, individuals, and situations. Therefore, administering a tool directly to a population with a different setting, culture, and language may not necessarily yield a reliable result. The mean self-rating for English proficiency of the participants is only less than 50 percent. In addition, all but one participant in this study preferred the Filipino version of the CVFQ3plus, justifying the need to develop a reliable translation of the questionnaire.

The results of this study show that the translated CVFQ3plus is a reliable tool in assessing quality of life of visually-impaired children 3 to 7 years old. The Filipino adaptation of the CVFQ3plus will be helpful in accurately assessing the QoL of visually-impaired children aged 3 to 7 years in the Philippine setting. This may improve the planning of holistic treatment regimens and may also be the beginning of gathering of data regarding the prevalence of childhood visual impairment and its burden on affected children, their families, and on society. Determining the impact of childhood visual impairment is important in cost-effectiveness and cost-benefit research, such as justifying the need for screening programs to catch diseases earlier in their course, when treatment can make some considerable impact.