Presbyopia is the age-related decline in accommodation. This process usually becomes perceptible between ages 40 to 50 and accelerates with age. Changes in the shape, size, and mechanical characteristics of the lens, as well as the function of the ciliary muscle have all been theorized to decrease the amplitude of accommodation.1

Optical solutions to improve near vision in presbyopic patients can be classified as surgical or nonsurgical. Nonsurgical solutions include the use of bifocals, progressive eyeglasses, and contact lenses (multifocal or monovision).2 Surgical presbyopic correction can be classified into cornea-based and lens-based techniques. Corneal presbyopic treatments, such as presbyopic LASIK (Supracor)3 or inlays (Acufocus Kamra),4 are performed on patients with no cataract, typically in the 40-60 year age group. Patients with cataract, usually aged above 60 years, undergo cataract surgery with implantation of an intraocular lens (IOL). Patients can choose a non-presbyopia-correcting monofocal IOL or presbyopia-correcting lenses which can be a multifocal or an accommodating lens.

The choice of optical correction for presbyopia can be influenced by many factors among which are the amount of visual disability, desire for spectacle inde-pendence, occupational and recreational needs, cost of treatment, availability of the procedure, discomforts and inconveniences, motivation for aesthetic appear-ance, and fear of side effects. Regardless of the form of optical solution, each patient has his/her own perceived satisfaction with the current state (with eye-glasses or spectacle-free) and the subsequent effect on the quality of life.

Uncorrected near-vision impairment caused by presbyopia may have a negative impact on activities of daily living, career options, and self-esteem. According to a worldwide census data, one-third of the population is older than forty.5 As the global population ages, the prevalence of presbyopia will increase. Presbyopia is commonly overlooked as a major source of disability due to the ease of acquiring reading glasses.6

With an increasing demand for spectacle independence, presbyopic LASIK, corneal inlays, multifocal and accommodating intraocular lenses were developed for optimum spectacle-free visual function. The safety and efficacy of these procedures are well-reported in the literature.2,3,4,7 However, studies on presbyopia that assessed quality of life and freedom Ophthalmologyfrom spectacles are scarce, especially in developing countries.8

Aside from clinical parameters and functional tests of visual acuity, patient-reported outcomes are important in the comprehensive assessment of patients with ocular conditions. Quality of life assessments complement and enhance our understanding of patient’s visual status; thereby, supplementing clinical tests used for assessment.8 Several functional patient-reported outcome scales have been developed in recent years. However, the National Eye Institute Refractive Error Quality of Life (NEI-RQL) instrument is the most widely used because of its reliability and validity.9

The 42-item NEI-RQL has been validated and utilized in previous studies; hence, validation was not needed for this particular study. The study by Nichols et al9 determined that the NEI-RQL questionnaire had excellent reliability at 91% and good concurrent validity at 83%. After signing the informed consent, the patients filled up the self-administered NEI-RQL questionnaires. Although the questionnaires were self-administered, an ophthalmologist was on site to facilitate administration and guide the participants. The responses in the questionnaires were subsequently collated, analyzed, and compared between the subgroups in group 1 and group 2.

The NEI-RQL instrument included questions that assessed different subscales (Table 1). As detailed in the scoring manual,11 all items were scored so that a high score represented better quality of life. Each item was converted to a 0 to 100 possible range so that the lowest and highest possible scores were set at 0 and 100, respectively. In this format, scores represented the achieved percentage of the total possible score. For example, a score of 50 represented 50% of the highest possible score. Each of the 13 subscales comprised 1-7 items whose scores were averaged to yield a final score for each subscale. 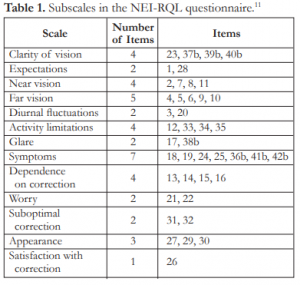 Table 1. Subscales in the NEI-RQL questionnaire.11

The study adhered to the tenets of the Declaration of Helsinki and approval was granted by the Institutional Ethics Review Committee.

A total of 150 patients who met the study’s inclusion criteria were able to complete the NEI-RQL questionnaire. Demographic characteristics in the 4 groups of study participants are shown in Table 2. The median age was 60 years (range 41 to 80 years); 93 (62%) were women. Basic refractive characteristics showed mean binocular UDVA of 20/32 or better in all 4 groups and mean binocular BDVA of 20/20 in all groups. The mean UNVA in subjects with presbyopic LASIK was J2, in subjects with multifocal IOLs J1, and in subjects with reading glasses including those with monofocal IOLs had J5 and J6 respectively. 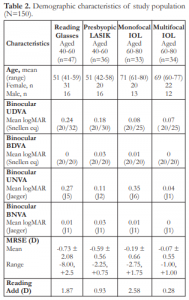 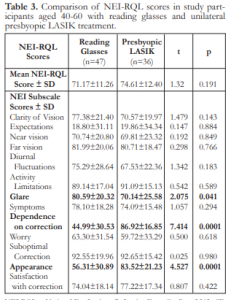 Previous studies have shown that presbyopia has a negative impact on vision-targeted health-related quality of life.10, 12 This association was strengthened by the finding that with increasing degree of presbyopia, subjects were more likely to fall into the group reporting the most difficulty, suggesting a dose-response relationship.8 There are several surgical strategies to correct presbyopia, including implantation of multifocal, accommodating or pseudoaccommodating intraocular lenses, for those with visually significant cataracts. From the wide range of intraocular lens options, multifocal IOLs have the advantage of providing functional vision at near, intermediate, and far distances. In recent developments, the cornea has been targeted to provide pseudoaccommodation in younger presbyopes. Presbyopic LASIK is one of the corneal approaches in treating presbyopia, wherein a multifocal corneal surface is created with the use of excimer laser ablation, thereby making a hyperpositive central cornea for near vision while leaving the mid-peripheral cornea for far vision.13 Therefore, presbyopic LASIK is a good option for young presbyopes who also require good distance vision correction. Well-established safety, efficacy, ease of surgery and availability of enhancement all make presbyopic LASIK an attractive option. Ultimately, these surgeries, whether lens-or corneal-based, are aimed at reducing near vision spectacle dependence in presbyopic patients.

In this study, we compared the quality of life of 40-60 year-old patients with reading glasses and presbyopic LASIK correction and in 60-80 year-old patients with monofocal and multifocal intraocular implants. Our data showed that presbyopic LASIK improved both UDVA and UNVA. The binocular BDVA (logMAR) of 0.03 (SD 0.06) was statistically different compared with the BDVA of 0.00 (SD 0.03) in the reading glass group (p=0.0038). Presbyopic LASIK decreased the reading add requirement by +1.00 D; thereby, decreasing spectacle dependence. Subjects who underwent presbyopic LASIK had a higher mean quality of life score; however, the difference was not statistically significant (p=0.191). Although they had less dependence on correction (p=0.0001) and perceived better appearance (p=0.0001), patient satisfaction (p=0.422) and perception of clarity of vision (p=0.143) were similar to those with reading glasses. The reduction in binocular BDVA in presbyopic LASIK patients might be due to higher experience of glare (p=0.041), dry eye symptoms (p=0.294), and diurnal fluctuations (p=0.183). Theoretical reasons for reduced BDVA included reduced light striking the retina from any focal length, thus reducing contrast sensitivity; pupil size reduction; the need for adaptation to the multifocal cornea; and dysfunctional tear syndrome.3

Previous studies have shown that patients have high preference and satisfaction with multifocal corrections.14 Our findings were consistent with previous published reports that implantation of multifocal IOL has a positive effect on the patient’s quality of life by improving reading performance.15 Cillino et al16 compared the visual outcomes, reading performance, and quality of life of working-age cataractous patients bilaterally implanted with 3 different diffractive multifocal intraocular lenses. In that study, the quality of life scores by the NEI-RQL instrument, photopic UNVA, distance-correctd near visual acuity (DCNVA), and corrected near visual acuity (CNVA) did not differ among the groups. The differences in reading acuity and maximum reading speed were exhibited under mesopic conditions. This evidence supported our findings that multifocal IOL implantation improved reading performance and quality of life.

In the study by Blaylock et al,17 refractive lens exchange with a multifocal IOL in presbyopic patients provided good visual function and better satisfaction compared to preoperative corrections. Slight reduction in contrast sensitivity function appeared to have no influence on quality of life.

Based on MEI-RQL scores, we recommend presbyopic LASIK for younger qualified presbyopes who value functional and aesthetic spectacle independence but are cautious in assuring improvement in their vision-related quality of life due to consequential glare, ocular surface symptoms and a mild compromise in their far vision. On the other hand, in older presbyopes who aspire for better near vision and spectacle independence, the implantation of a multifocal intraocular implant has been shown to significantly improve their quality of life. However, patient expectations should be managed equally in all patients, whether with non-surgical or surgical presbyopia correction, since these patients have comparable demands and expectations.

The weakness of our study lay in the length of the questionnaire making it unappealing to some respondents. The Hawthorne effect (tendency of survey respondents to feel more positively about a topic due simply to the extra attention) and cognitive dissonance (a greater likelihood to have positive feelings about a result in an attempt to be consistent with and justify one’s choice in having surgery) should be considered18. For future studies, we recommended using a short-form version of the questionnaire and possible translation and validation of a Filipino version in order to widen population coverage.