GLAUCOMA is associated with various risk factors, foremost of which is elevated intraocular pressure (IOP). Understanding aqueous-humor dynamics, which regulate IOP, is key to understanding glaucoma, as IOP is currently the only factor that can be modified to prevent progressive optic neuropathy.
Several factors have been associated with raised IOP, including diurnal variation, postural variation, and exertion. IOP can increase when changing from sitting to supine or prone position. The reported IOP changes due to postural effects ranged from 0.3 to 6.0 mm Hg.
Others reported increase in IOP twice from baseline during posture changes. The postural influence on IOP was greater in eyes with glaucoma and persisted even after a successful filtering surgery.Straining, associated with valsalva’s maneuver, has also been linked with raised IOP. The likely mechanism for this phenomenon included elevated episcleral venous pressure. Massage is the practice of applying structured or unstructured pressure, tension, motion, or vibration— manually or with mechanical aids—to the soft tissues of the body to achieve a beneficial response. Massage is usually performed on a person while lying on a massage table, sitting upright in a massage chair, or lying on a pad on the floor. The therapy usually lasts about an hour. Two important facets associated with increase in IOP are present when a person undergoes a body massage in prone position postural effect and exertion due to valsalva’s. Depending on the type of massage performed, the subjects usually exert some form of straining and valsalva’s, both of which can cause an increase in IOP independently. Several studies related Sirsasana or head stand exercise and yoga to IOP, but none on face-down massage. With the proliferation of wellness clinics and spas, facedown body massage is becoming more popular. We, therefore, determined the IOP changes during face-down body massage in normal eyes. The information obtained from this study can help guide clinicians on how to advise patients, espcially those with glaucoma, regarding activities that can cause transient raised IOP.

METHODOLOGY
Forty-six volunteers recruited to have massage in prone position for 30 minutes were included in the study. After informed consent was obtained, the participants underwent a complete eye evaluation with normal findings. Excluded were those with severe eye disorders and conditions precluding prone position, such as back disorders (scoliosis, slipped disc, osteoartritis). Ophthalmic examination included best-corrected visual acuity, slitlamp examination, gonioscopy, funduscopy, ultrasound pachymetry for central corneal thickness, and visual-field examination. A professional masseuse performed a 30- minute back massage (combination of Swedish and shiatsu) on each of the subjects lying face down. The IOPs were measured in both eyes using a pneumatonometer (Medtronic Solan Model 30, Medtronic, Jacksonville, FL, USA) after application of 1% proparacaine (Alcaine) eye drops. The IOP was taken before the massage, immediately after the volunteer resumed the sitting position, then every 5 minutes thereafter until the IOP returned to baseline. Data were analyzed using paired t-test. The study was conducted in accordance with the tenets of the Declaration of Helsinski and approved by the Institutional Review Board of the Asian Eye Institute.

It is well recognized that a change in body position alters IOP. Several authors have reported an average rise of 2 to 3 mm Hg in IOP when body position is changed from sitting to supine. 4, Others reported changes as high as 6 mm Hg, with several authors reporting twofold increase when changing position from sitting to lying face down.  The rise in IOP in this study is similar to those in other studies dealing with changes in body position. The IOP uniformly increased in all but 3 participants whose pressures were taken immediately after the massage. The rise in IOPs may have been higher had the pressures been measured while lying face down during the massage. Due to technical difficulties, IOPs were not obtained in the original position but in sitting position immediately after the massage. Elevated episcleral venous pressure as a result of the face-down lying position is one possible mechanism of IOP rise. 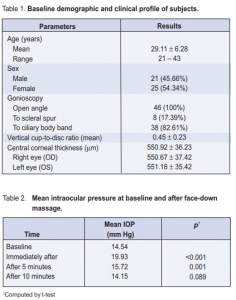 Further studies, such as anterior-segment optical coherence tomography or ultrasound biomicroscopy, are needed to document specific changes in the eye. This study also did not demonstrate a significant IOP difference (much higher IOP elevation) when the two factors (postural effect and valsalva’s) were present compared with other studies wherein there was significant IOP rise with change in body position alone. But it reinforced the view that patients with glaucoma are susceptible to pressure spikes when they assume the prone position. Glaucomatous eyes, especially those with advanced damage, may not be able to withstand the transient but significant increase in IOP that occurs after assuming a face-down position.