Status of screening for retinopathy of prematurity in a tertiary hospital

RETINOPATHY of prematurity (ROP) or retrolental fibroplasia is a proliferative retinopathy of premature and
low-birth-weight infants.1 It consists of abnormal retinal vessels that grow mostly in an area of the retina where normal vessels have not yet grown. ROP is classified into stages I to V based on severity.2 According to the World Health Organization, two-thirds of the estimated 1.5 million blind children in the world are in Asia. The leading causes are corneal opacification caused by measles, xerophthalmia, and use of traditional eye medicine. Other causes are optic-nerve atrophy, amblyopia, infantile glaucoma, cortical visual impairment, and retinopathy of prematurity (ROP).3 In the Philippines, almost 480,000 Filipinos are blind: 50% of these cases are treatable or preventable. Poor nutrition, measles, and premature birth are the leading causes.3 ROP remains a serious problem in the hospital setting despite advances in neonatology.4 Babies born below 1,500 grams in weight or less than 28 weeks of gestation are still the criteria observed. This study determined the status of ROP screening at the Section of Neonatology and Department of Ophthalmology of the University of Santo Tomas Hospital based on the guidelines and criteria for ROP screening and treatment adopted by the hospital, and correlated birth weight (BW) and age of gestation (AOG) with ROP staging.

METHODOLOGY
Premature babies referred for ROP screening from July 2007 to August 2008 were included in this retrospective
study. Included were babies born at 28 weeks or less of gestation or 1,500 grams or less in weight. Excluded were babies born full term with good BW. Data on BW, AOG, date of referral, progression of the disease, treatment (if done) and their outcomes were obtained from previous census of the Department of Ophthalmology and from the master logbook (“Book of Life”) kept by the Nursery Section. All preterm babies, whether referred or not for ROP screening, were included, and comparison was made between the 2 censuses. The clinical-practice guidelines and criteria for ROP screening (Neonatology: Management, Procedures, On-call Problems, Diseases and Drugs and American Academy of Ophthalmology) followed by both sections were
also obtained.5 Data were analyzed using Pearson’s, chisquare test, and Spearman’s rho correlation. 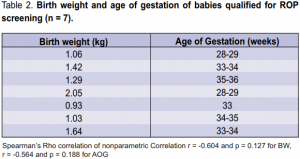 however, was not statistically significant. Of the 7 babies seen at the Department of Ophthalmology, 3 had no signs of ROP and 2 were lost to follow-up. Only 2 patients were diagnosed with stage 2 in both eyes, 1 of whom had stage 2 zone II and plus disease in both eyes that improved in 4 weeks after indirect laser.

DISCUSSION
The progression of ROP involves hyperoxiavasocessation (phase I) and hypoxia-vasoproliferation (phase 2). 4
Birth weight and gestational age are currently the most predictive risk factors for the development of ROP.6
The risk increases as gestational age and birth weight decrease.7 Other factors that may be involved are:
-oxygen therapy, which has been cited but not proven,
as a cause of progression of prethreshold ROP,8
-vitamin E, though further studies are ongoing, and
– premature exposure to light, which has not been fully proven.
Certain diseases associated with ROP include respiratory-distress syndrome (hyaline-membrane disease), pulmonary interstitial emphysema, pneumothorax, and bronchopulmonary dysplasia.7 Among the 20 qualified babies for ROP screening, only 7 underwent ROP staging, of whom 2 had positive stage 2 (birth weight of 0.93 kg and 1.06 kg, and 1 at 28 to 29 weeks AOG). There was a strong negative correla` tion between BW and ROP staging which meant that as the weight increased, the staging decreased. However, this was not statistically significant mainly due to the small sample size. The same was observed for AOG, with moderate negative correlation where the staging decreased as the age increased. Statistical significance was not achieved due mainly to the small sample size. Screening is an important aspect in lessening the complications of ROP. In a joint statement by the American Academy of Pediatrics, the American Academy of Ophthalmology, and the American Association of Pediatric Ophthalmology and Strabismus, the following were recommended:9

– screening examinations of infants with birth weights of less than 1,500 grams or gestational age of 30 weeks or less (as defined by the attending neonatologist), and selected infants with birth weights between 1,500 and 2,000 grams or gestational age of more than 30 weeks with an unstable clinical course, including those requiring cardiorespiratory support and who are believed by their attending pediatrician or neonatologist
to be at high risk;
-retinal examination of preterm infants by an ophthalmologist who has sufficient knowledge and experience to enable accurate identification of the location and sequential retinal changes of ROP;
-initiation of acute-phase ROP screening based on the infant’s age. Studies have shown that the onset of serious ROP correlated better with postmenstrual age (gestational age at birth plus chronologic age) than with postnatal age. In contrast, Lee et al. recommended that screening be done in all babies less than 1200g for cost effectivity.11 The Clinical Practice Guidelines for ROP in Malaysia added that the first examination should be done 4 to 6 weeks after birth since very early examination may have no value.8 Current guidelines recommend that follow-up examinations should be done weekly for infants with ROP less than threshold in zone 1, ROP in zone 2 including stage III ROP without plus disease, stage II ROP with plus disease, and stage III ROP with plus disease not yet extensive enough to justify ablative therapy. Examinations are done at 1 to 2 week intervals for infants with less severe ROP in zone 2 and no ROP but incomplete retinal vascularization in zone 1. Examinations at 2 to 3 week intervals are done for those with incomplete retinal vascularization in zone 2 but no ROP, and retinal ablative therapy (either cryotherapy or laser photocoagulation) must be performed within 72 hours of diagnosis for infants with threshold disease. Early treatment is vital in ROP. According to the Early Treatment for ROP (ETROP) Study, infants less than 1251g with prethreshold ROP should undergo treatment like cryotherapy to reduce unfavorable visual acuity outcomes.12 This study had limitations; among them, the relatively low number of qualified infants for ROP screening that may not reflect the whole picture of ROP in the hospital, the short period of time for examination, the level and duration of oxygen therapy when given were not studied, and the treatment outcomes of each of the infants who underwent intervention. In summary, less than half of babies who met the criteria for ROP screening were seen by the Department of Ophthalmology and only 1 underwent indirect laser treatment for stage II zone 2 with plus disease. There was
strong correlation between BW and AOG with ROP staging in this study but they did not reach statistical significance due to the small sample. Thus, ophthalmologists and pediatricians should work together to reduce the number missed out for ROP screening, especially those at high risk for ROP.