Myopia is a common ocular abnormality­ worldwide with a prevalence in adults of 22.7% and 26.2%, reported in the Baltimore Eye Survey and theBeaver Dam Study, respectively.1–2 Among adult Chinese in Singapore, it was estimated that 38.7% of adult Chinese were myopic and 9.1% were high myopes.3 From the clinical and socioeconomic standpoints, these are major concerns especially among East Asian countries where there are projections for increasing prevalence rate and severity of the condition.4 One of the potentially blinding ocular diseases found to have a strong relationship with myopia is glaucoma5 which is characterized by progressive degeneration of retinal ganglion cells, one of the common ocular diseases seen among Filipinos. An important approach in the detection of early structural change in glaucoma is based on assessment of the retinal nerve fiber layer (RNFL) using the optical coherence tomography (OCT). Numerous studies have confirmed that RNFL measurement is sensitive in detecting glaucoma, and the extent of RNFL damage correlates with the severity of functional deficits in the visual field.6–8 Some patients can lose up to 40% of their RNFL before any visual field defect is detected. The Stratus OCT utilizes a normal population database for RNFL measurements, developed by the manufacturer and packaged within the software. However, it did not include individuals with moderate or high degrees of myopia and there were only 11 Asians out of the 328 subjects included in the establishment of the normative reference values for RNFL thickness measurement.9 RNFL thinning is indicative of glaucomatous damage; however, it remains uncertain whether RNFL thickness would vary with the degree of myopia where eyes have longer axial lengths and stretched-out retina. Conflicting data existed regarding the influence of myopia on peripapillary retinal nerve fiber layer (RNFL) thickness. Some studies showed no association whereas others found significant correlations.9 This study investigated if there is a significant relationship between the degree of myopia and RNFL thickness as measured by optical coherence tomography.

Adult Filipinos, between 18-39 years of age, with myopia of ≥0.75 D and no ocular or systemic conditions that can affect the refraction , were recruited from July 2012 to August 2012 at the outpatient department of the Department of Ophthalmology, University of Santo Thomas Hospital. Subjects less than 18 years old, spherical equivalent <-0.75 D, diagnosed glaucoma or glaucoma suspect with CD ratio ≥0.5, those with frank presbyopia, and those with ocular diseases such as cataract and any form of retinopathy were excluded.
All subjects underwent complete ophthalmologic examination consisting of visual acuity determination, refraction, applanation tonometry, slit lamp evaluation, stereoscopic biomicroscopy of the optic nerve head at the slit lamp using a 90 D lens, and fundoscopy. OCT was performed with the Stratus OCT (Carl Zeiss, Meditec Inc.). RNFL thickness was measured with the fast RNFL scanning protocol (256 A-scans). Average measurements of three sequential circular scans with a diameter of 3.4 mm centered on the optic disc were recorded. All the scans had signal strength of at least 7. Parameters including average RNFL thickness and mean RNFL thickness in each quadrant were generated automatically in the analysis report of the Stratus OCT. Correlations between refraction (spherical equivalent) and RNFL thicknesses were determined by linear regression analysis and expressed as the Pearson coefficient of correlation (r), with p<0.05 considered statistically significant. 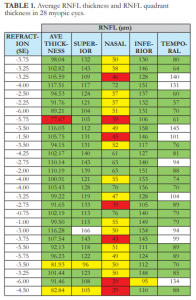 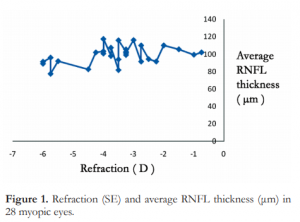 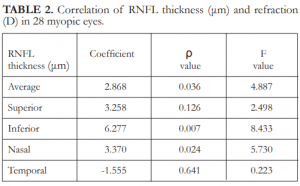 There was, however, no significant correlation between the refraction and the superior and temporal RNFL thickness (p = 0.13 and 0.64, respectively) (Figures 2 and 3; Table 2). 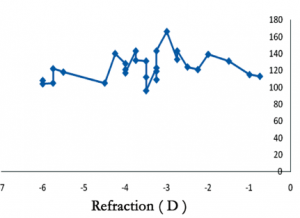 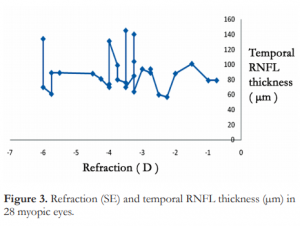 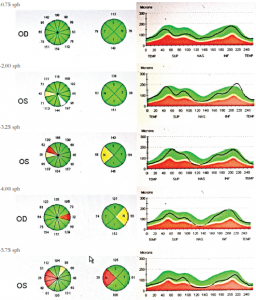 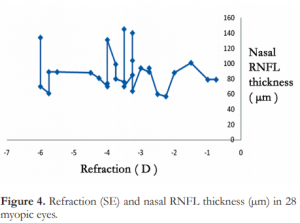 Our findings indicated that the average retinal nerve fiber layer thickness decreases as the refraction becomes more myopic. These data supported the findings of Schweitzer10 and Leung11 that there is a positive correlation between refraction and RNFL thickness. This is in contrast to the results found by Hoh12 where the mean RNFL thickness did not vary with the degree of myopia when investigated by OCT. In our study, we found that there was a decrease in the RNFL thickness at the nasal quadrant, 78% of which were below normal limits based on the normative database of the Stratus OCT. A positive correlation between the degree of myopia and the 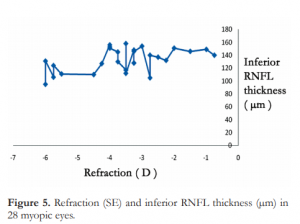 nasal RNFL thickness was observed. There was a decrease of 3.37 µm for every 1.00 D decrease in refraction. This data supported the findings of Leung11 that Chinese myopic subjects have thin nasal RNFL, a finding not found in the largely Caucasian population where Rauscher noted that thin RNFL in myopic subjects occurred preferentially at the superior and inferior quadrants.9 We also found that there was a positive correlation between the degree of myopia and RNFL thickness at the inferior quadrant but the majority were within normal range and only 3% were below 95%. The Stratus OCT used in this study provided superior image quality and higher resolution scanning of the RNFL compared to earlier models. Although newer generation OCT are now available, the Stratus OCT remains to be widely used in the Philippines. The Stratus OCT provides a database with agematched controls for comparative analysis aiding the detection of ocular diseases involving the RNFL but myopia have been reported.10 Myopic globe elongation may seem to stretch and thin the RNFL because of mechanical forces.11 Myopic retinal degeneration may account for decrease RNFL thickness and a larger disc with normal ganglion cells may provide a greater surface area for axon distribution.13 On the other hand, the decreased RNFL thickness among myopes could represent a predisposing factor for future development of glaucoma that could partly explain the increase incidence among myopes in some studies like the Blue Mountain Eye Study where data showed strong relationship between open-angle glaucoma and myopia.5 In conclusion, RNFL measurements may vary with refraction.  There is a decrease in the average RNFL thickness as the refractive error becomes more myopic which may  suggest the need for the Stratus OCT RNFL normative database to have corrective factors for refractive error among myopic patients and to verify these data with the use of the new generation Cirrus OCT. Although both nasal and inferior quadrants positively correlate with myopia, majority of the nasal quadrant showed below normal thickness based on the Stratus OCT normative database. A careful interpretation of RNFL measurements, especially the nasal quadrant, should be done among myopic subjects to avoid mislabeling them as glaucoma suspects.