Disclosure: The authors declare no conflict of interest.

Glaucoma is the leading cause of irreversible blindness worldwide.1 It is a progressive neurodegenerative disease that results in damage to the optic nerve, with corresponding visual field loss. Assessment of visual field damage is of utmost importance and determining the rate of progression, measured in terms of visual field change per year (decibels (dB)/ year), influences management decisions.2

Glaucoma patients undergoing treatment are said to have a rate of progression of approximately 0.6 dB/year, a value between that of normal visual field decay (0.07 dB/year), and untreated glaucoma patients (1.1 dB/year).3 However, in a population of glaucoma patients and suspects under routine clinical care, while most progressed slowly at a rate <1 dB/year, 4.3% were fast progressors, identified as those with mean defect (MD) rates between 1-2 dB/year, and 1.5% were catastrophic progressors, with a MD rate >2dB/year.4 Studies that measure the rate of visual field progression of glaucoma patients undergoing treatment are important because they serve as benchmarks for clinical glaucoma care and allow clinicians to assess how successful they are in curbing the rate of disease progression and visual disability in their setting.

Several factors have been associated with an increased rate of visual field progression such as age, intraocular pressure (IOP), severity of baseline visual field MD, and glaucoma subtype but study results have been conflicting.4-9 Most of these studies only included open angle glaucoma types and need further validation. Identification of risk factors that influence the rate of visual field progression allows the clinician to pinpoint which patients are in need of more frequent monitoring or aggressive management.

This was a retrospective review of records conducted at the Department of Ophthalmology and Visual Sciences (DOVS) – Sentro Oftalmologico Jose Rizal (SOJR) of the Philippine General Hospital (PGH). The medical records of patients diagnosed with POAG and PACG who followed–up at the Glaucoma Clinic from August to October 2018 were reviewed according to the inclusion and exclusion criteria.

All patients were ≥40 years old at the time of diagnosis and baseline visual field examination, with visual acuity >20/200 throughout the duration of the study period (defined as the period encompassed between the first and last visual field tests analyzed). Corresponding medical records indicating IOP, addition of/change in medications, or if the patient underwent laser/surgery during the study period must also be available.

To be included, the study eye must have undergone ≥5 visual field examinations in ≥2 years using the G1 program (Dynamic Strategy) of the Octopus 311 Perimeter (Haag–Streit, USA), where each visual field examination included for analysis was classified as at least a Stage 1 based on the Enhanced Glaucoma Staging System (GSS 2) by Brusini11,12 and was deemed reliable. Reliability was defined as reliability factor ≤15%.

Eyes with a diagnosis other than POAG or PACG, or with an ocular disease that may influence visual field results (such as a vaso–occlusive disease, neurologic/neuro–ophthalmologic optic nerve pathology, diabetic retinopathy, retinitis pigmentosa, laser treatment on retina, pathologic myopia, tilted disc, retinal detachment, and macular degeneration) were excluded.

With regard to the visual fields, a test was excluded from analysis if it did not qualify as at least a Stage 1 based on the Enhanced Glaucoma Staging System (GSS 2) by Brusini10,11, if it was deemed unreliable, influenced by an artifact (i.e. clover leaf pattern, lens rim artifact, ptosis, or constricted pupil), associated with a 2-line decrease in visual acuity corresponding to an increase in cataract grade or worsening media opacity, or if the test was done <1 month after a laser or surgical procedure (including cataract surgery).

For each patient, both eyes were included to the study if both met the aforementioned criteria.

For each study eye, the rate of visual field progression was calculated using linear regression analysis of the MD values over time, where rate of progression was the slope expressed in dB/year.

Descriptive analyses were performed on demographic data, follow-up duration, number of visual field tests, baseline MD, and IOP. T-test was done to compare the baseline data between the POAG and PACG populations as well as rates of progression in POAG and PACG. Pearson’s r correlation was done to evaluate factors hypothesized to affect the rate of visual field progression. Multivariate analysis was done to evaluate the effect of baseline age, baseline MD, mean IOP on follow-up, number of eligible automated visual fields (AVFs), and number of years followed, on the rate of progression of visual field loss for both the POAG and PACG populations. Since treatment has a direct effect on IOP, a second multivariate analysis was performed including the treatment variables. All statistical analysis was done using Stata Statistical Software (StataCorp LP. 2015. Stata Statistical Software: Release 14. College Station, Texas 77845 USA).

The primary outcome of the study was the rate of progression of visual field loss in MD dB/years in POAG and PACG patients managed in the Glaucoma Clinic of the PGH.

This study was approved by the University of the Philippines Manila Research Ethics Board (UPMREB) and was conducted in full conformance with the principles of the Declaration of Helsinki, Good Clinical Practice, and within laws and regulations of the University and the country. 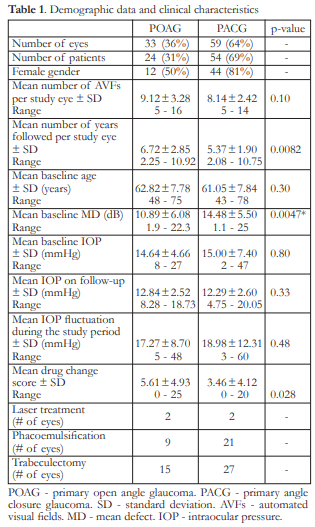 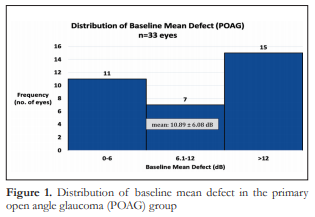 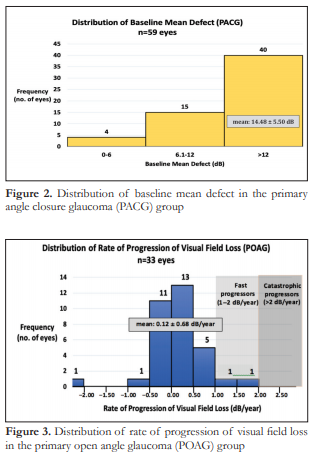 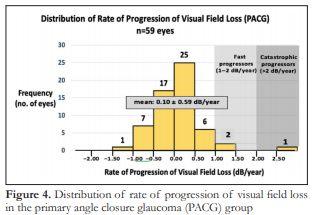 In the POAG group, multivariate analysis showed that a higher baseline MD (p=0.026) and mean IOP on follow–up (p=0.009) were associated with a significantly slower rate of progression (more negative slope). Baseline age, number of AVFs examined, and number of years followed were not significant (Table 2). 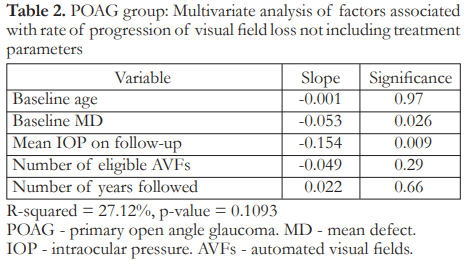 When the treatment parameters were added to the multivariate analysis, mean IOP on follow–up was no longer significant, but higher baseline MD (p=0.013) and laser treatment (p=0.015) were associated with a significantly slower rate of progression (Table 3). After one by one removal of non–significant variables from the analysis, we were left with the following significant variables: baseline MD (p=0.017), mean IOP on follow–up (p=0.020), and laser treatment (p=0.004). The model fit was statistically significant at p=0.0010, with an R2 of 0.4263 indicating that the independent variables explained 42.63% of the variation in rate of visual field progression (Table 4). 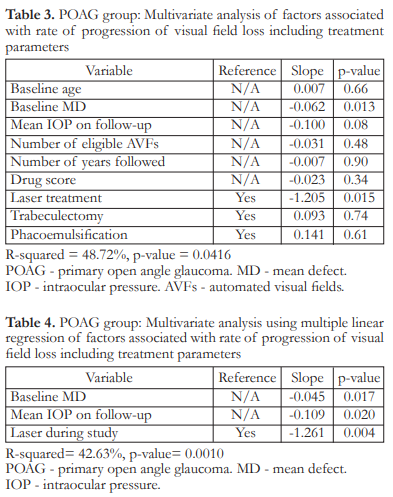 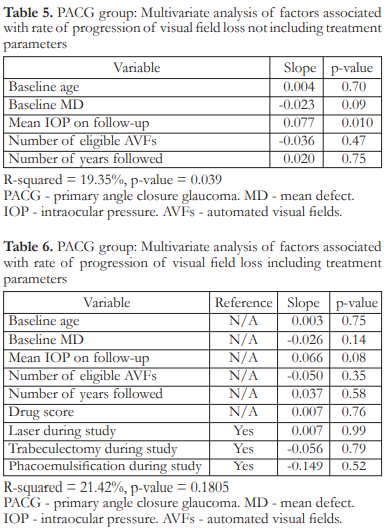 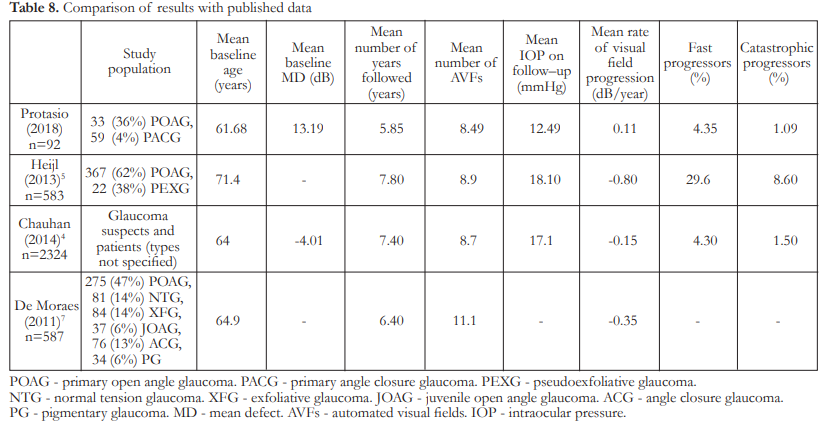 There was no significant difference in the rates of progression of visual field loss between POAG and PACG patients undergoing routine glaucoma care in our institution. Mean rate of progression in the POAG group was 0.12 ± 0.68 dB/year while that in the PACG group was 0.10 ± 0.59 dB/year (p=0.8525). This is comparable to the mean rate of visual field progression published in the study by Chauhan which is 0.15 dB/year, but much slower than the mean rates of progression reported by De Moraes and Heijl which were 0.35 dB/year and 0.80 dB/year respectively (Table 9).4,5,7 By defining fast and catastrophic progressors as those with rates of visual field change of 1–2 dB/year and >2dB/year respectively, our results are in agreement with other studies that showed that most glaucoma patients under routine clinical care progressed slowly (<1dB/year).4 A unique feature of the present study is that we compared the rates of visual field progression between POAG and PACG patients. This was made possible because of the high number of PACG patients seen in our institution. In comparison, the study by De Moraes had a study population of 587, but only 13% had angle closure glaucoma.7 No comparison was made between glaucoma subtypes. The study by Chauhan studied the rates of progression of glaucoma suspects and those with manifest glaucoma but did not segregate the latter according to types.4 The study by Heijl only involved POAG and pseudoexfoliative glaucoma (PEXG) patients.5 The aforementioned studies also reported data from AVF examinations done on the Humphrey Visual Field Analyzer. This is in contrast with our study where the visual field examinations were taken using the Octopus machine.

Higher baseline MD signifies more visual field loss. Its association with slower progression in POAG eyes can be due to truncation effects where a visual field with very advanced defects cannot progress as much as a field with smaller defects.5 Perhaps, a higher MD value at baseline also prompted more aggressive management resulting to a slower rate of progression. The same finding was also reported by Heijl.4,5

Higher mean IOP on follow–up was associated with a slower rate of visual field progression. This could be due to more aggressive IOP–lowering interventions. This finding might also be explained by the theory that POAG, compared to PACG, is hypothesized to be a less pressure–dependent disease. In a study by Gazzard, a weaker correlation between IOP and visual field loss was found among POAG patients compared to PACG patients.12 He postulated that other pressure-independent mechanisms may exist in eyes with POAG. Despite these findings, IOP still remains the sole proven modifiable risk factor for all types of glaucoma. Mean follow-up IOP was not found to be significant after multivariate analysis in the study by Chauhan. Heijl on the other hand found a higher mean IOP to be associated with faster rates of progression, which is in disagreement with the finding of our study.

Analyzing the factors affecting the rate of visual field progression in eyes with PACG showed that baseline MD was weakly negatively correlated (Pearson’s r=-0.2798, p=0.0318) while mean IOP on follow–up was weakly positively correlated (Pearson’s r=0.368, p=0.0041). These imply that a higher baseline MD was associated with a slower rate of progression in PACG eyes, again perhaps due to truncation effects or more aggressive management. A higher mean IOP on follow–up on the other hand was associated with a faster rate of progression (positive slope), the implications of which will be discussed below.

The finding that higher mean IOP on follow–up was associated with a faster rate of progression in the PACG group might mean difficulty in controlling the IOP in this subset of patients, as compared to POAG. This also strengthens the claim of Gazzard that PACG may be considered to be a more purely pressure-dependent disease than POAG.12

Interestingly, our study did not find baseline age to be associated with rate of progression of visual field loss in both POAG or PACG groups. This is in contrast to the result of other studies that reported a correlation between older baseline age and faster progression.4,5 A younger mean age in our study population may partly explain the differences in our findings.

Since the study is retrospective in nature, we feel that this is an accurate reflection of routine clinical care because changes in management were not implemented according to changes in the rate of visual field progression (i.e. more aggressive IOP lowering schemes could have been done for eyes noted to have fast rates of progression, effectively slowing down the rate of progression from that point onwards, as would be assumed to happen in a prospective study). However, also because of its retrospective nature, there is a certain degree of variability inherent in the data.

We would like to acknowledge the contributions of Mae Ann DL. Daduya from the School of Statistics, University of the Philippines, Diliman.