Prevalence of Graves ophthalmopathy among patients with thyroid disease

GRAVES disease usually occurs in conjunction with hyperthyroidism, and ophthalmopathy is most commonly
observed among those with the active or treated form of the disease. It is also seen in Hashimoto’s disease,
carcinoma of the thyroid, or other forms of thyroid disease.1 Patients with Graves disease may present with
ophthalmological signs and symptoms, that can appear before other signs of hyperthyroidism or even after
regression of the disease. Thus, ophthalmological signs can lead to a diagnosis of Graves disease.2 A recent epidemiological study of white American patients with Graves ophthalmopathy placed the overall age-adjusted incidence rate at 16 per 100,000 per year for women and 3 per 100,000 for men. It affected women
approximately six times more frequently than men. The peak incidence rates occurred in the age groups 40 to 44 years and 60 to 64 years in women and 45 to 49 years and 65 to 69 years in men. The median age at the time of diagnosis was 43 years (range, 8 to 88 years).1 Graves ophthalmopathy appears to be an organ-specific autoimmune disorder. It is also known as thyroid eye disease or thyroid-associated ophthalmopathy. Progression of the disease usually stops on its own within a two-year period and it rarely recurs. Mild symptoms may completely selfresolve, but treatment may be necessary to restore eyelid function, improve appearance, and correct vision.3-4 This study determined the prevalence of Graves ophthalmopathy and its common ocular signs and symptoms among thyroid-disease patients in a tertiary hospital.

METHODOLOGY
This study used a descriptive cross-sectional design. The study population consisted of 121 thyroid-disease patients seen at the thyroid clinic of Jose R. Reyes Memorial Medical Center from February to September 2007. The patients underwent complete ophthalmological examination, which included visual-acuity testing using
the Jaeger’s near chart; exophthalmometry using the Hertel exophthalmometer; examination of eyelid for
presence of lid retraction, lid lag, and lateral flare; globe position (axial, medial, and lateral); external ocularmuscle-movement grading; corneal light reflex; and direct funduscopic examination using ophthalmoscope to check the status of the optic nerve. Patients at the thyroid clinic were diagnosed to have thyroid disease based on the following criteria: presence of goiter or enlargement of thyroid gland or presence of thyroid dysfunction based on laboratory tests. Based on the American Academy of Ophthalmology guidelines, Graves ophthalmopathy is present if eyelid retraction occurs together with objective evidence of
thyroid dysfunction, or exophthalmos, or optic-nerve dysfunction, or extraocular-muscle involvement. If eyelid retraction is absent, then Graves ophthalmopathy may be diagnosed only if exophthalmos, optic-nerve involvement, or restrictive extraocular myopathy coexist with thyroid dysfunction and no other causes for the ophthalmic features are apparent. All clinical findings and personal details were recorded in a specially designed form. Data were analyzed using Stata software. Chi-square and Fisher’s exact tests were used to determine if gender and age were associated with the different symptoms. One-way analysis of variance (ANOVA) was used to compare the average number of ocular symptoms among the different age groups and Bonferroni’s test was done for multiple comparisons.

DISCUSSION
The prevalence of Graves ophthalmopathy in this study was 47.93%, notably lower than that reported by Besharati and colleagues (60.0%),4 Nordyke and associates (91.4%),5 and Bartley et al. (90.0%).6 It is the most common cause of unilateral and bilateral proptosis in adults. Proptosis occurs because the orbital contents confined within the bony orbit, and 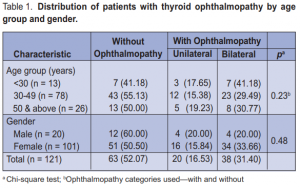 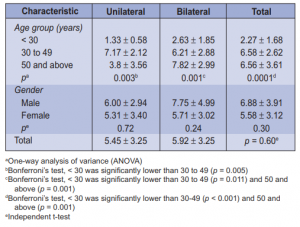 decompression can only occur anteriorly.1-3, 7 Besharati and colleagues found that bilateral ophthalmopathy
occurred more frequently than unilateral ophthalmopathy and the frequency increased with age.4
The eyes are usually involved asymmetrically and rarely involved unilaterally. For unilateral proptosis, assessment for retrobulbar tumor is, therefore, necessary.8 The occurrence of different signs and symptoms of
ophthalmopathy in Graves disease has been the subject of many studies. In a study by Nordyke and colleagues, proptosis and lid retraction were the most important signs of the disease and proptosis mostly occurred in the 30- to 49-year age group.5 It was similarly observed in a study done by Teshome and Seyoum.9 In a clinical review by Carter,10 ophthalmopathy was present in 2% to 7% of patients with Graves hyperthyroidism and the main manifestations were proptosis, ophthalmoplegia, and lid retraction. Bartley8
found a 2.2% decrease in visual acuity secondary to optic neuropathy and constant diplopia. Of one-third of patients with eye discomfort, the most common complaint was dry eye. They also showed that the ratio of women to men was 1:0.6 with a bimodal incidence in the 40- to 44-year and 60- to 64- year age groups. Approximately 90% of the patients had hyperthyroidism, 3% had Hashimoto’s disease, and 5% had euthyroidism. Unilateral or bilateral lid lag was common and was noted in 50% of patients during the
primary clinical examination.8 At the time of diagnosis of Graves disease, the most common ophthalmological
symptom was pain. Signs and symptoms that significantly changed between the first and the final visits included tearing, pain, ocular discomfort, photophobia, lid retraction, lid lag, conjunctival injection, chemosis, lid fullness, and exophthalmos. Emergency conditions associated with Graves ophthalmopathy included optic neuropathy, corneal ulceration, globe subluxation, and periorbital edema with chemosis.11 Early diagnosis and treatment is important as there is a direct relationship between decreased vision and the effect of treatment.
Graves ophthalmopathy may appear before, during, or after systemic presentations of thyroid disease. In a study by Besharati and associates, the most common complaints at the time of referral were nonocular, although most cases of ophthalmopathy occurred during the first 18 months after diagnosis of Graves hyperthyroidism.4 Marcocci et al. showed that there was no clear relationship between treatment of hyperthyroidism and the course of ophthalmopathy.12 Antithyroid drugs may improve ocular manifestations, whereas prescription of radioactive iodine and thyroidectomy can cause worsening of ophthalmopathy.
Graves ophthalmopathy was associated with extensive ocular morbidity in more than 90% of patients with
hyperthyroidism.13 One of the most valuable diagnostic tests for ophthalmopathy is an orbital CT scan, in
conjunction with a clinical examination and thyroid function tests. If Graves ophthalmopathy is clinically diagnosed, there was no need for further imaging; but if imaging is necessary, MRI is more sensitive than CT in showing compression of the optic nerve, although CT is sometimes required to visualize the orbital bony structures for optic-nerve decompression.14 Ampudia and coworkers investigated the occurrence of exophthalmos diagnosed by Hertel exophthalmometry and CT scan. Exophthalmos by Hertel exophthalmometry was measured as 22.5 ± 2.5 mm for the right eye and 23.2 ± 3.2 mm for the left eye. The measurements made by CT scan were smaller (20.8 ± 3.2 mm and 20.9 ± 2.9 mm for the right and left eyes, respectively) but this difference was not statistically significant.15 The study showed that the muscles were not equally involved and the medial recti muscles were most commonly involved. Regulation of thyroid function did not always improve Graves ophthalmopathy and may worsen the condition in some euthyroid patients.16 17 In patients with hyperthyroidism, ophthalmopathy usually occured within 18 months of disease onset. Park et al. showed that Graves ophthalmopathy also affected the quality of life.13, 16, 18

In summary, Graves ophthalmopathy was clinically apparent in 58 out of 121(47.93%)patients examined, 50
of whom were females. The highest overall prevalence was observed in those 30 to 49 years of age, and bilateral ophthalmopathy (65.5%) occurred more frequently. The most common symptoms were lid retraction, proptosis, lid lag, staring, and periorbital edema. Ophthalmologic examination should be done routinely on patients with thyroid disease. Regular follow-up should include monitoring of thyroid exophthalmos by exophthalmometry. Imaging studies may be performed as needed to ascertain the status of the disease.