Prevalence of Dry Eye Disease in an Urban Community

The definition of dry eye syndrome has evolved over the years. In 1995, the National Eye Institute (NEI) of the USA defined dry eye as “a disorder of the tear film due to tear deficiency or excessive tear evaporation, which causes damage to the interpalpebral ocular surface and is associated with symptoms of ocular discomfort.”1

In 2007, the Definition and Classification Subcommittee of the International Dry Eye Workshop released the following definition: “Dry eye is a multifactorial disease of the tears and ocular surface that results in symptoms of discomfort, visual disturbance, and tear film instability with potential damage to the ocular surface. It is accompanied by increased osmolarity of the tear film and inflammation of the ocular surface.”2 This newer definition emphasizes the symptoms and mechanisms while recognizing the multifactorial nature of dry eye disease.

In Asia, population based surveys on the prevalence of dry eye in Thailand, China, and Indonesia were done using validated questionnaires of ocular symptoms relating to dry eye. Results showed age-adjusted prevalence rates of 34%, 21%, and 27.5% respectively.4,5,6 On the other hand, a hospital-based study conducted in India, randomly screening 500 patients above 20 years of age, showed that 18.4% had dry eye.7

While published literatures have shown how widespread this condition is in other countries, there is limited or no similar study done in the Philippines.

This study aimed to describe dry eye syndrome in an urban community in Manila, Philippines, in terms of prevalence, severity, and risk factors of dry eye symptoms.

A community-based cross-sectional study was conducted from July 27 to August 4, 2013, through convenience sampling of residents of Barangay 733 in OphthalmologySampaloc, Manila, Philippines. Male or female residents of the selected barangay who were 19 years old and above were included in this study. The study was in accordance with the guidelines set by the Declaration of Helsinki. All participants were informed about the nature of this study, including the possible risks and benefits, and informed consent was obtained before enrollment. The institutional review board of the Philippine General Hospital approved the protocol (Approval No: UPMREB 2013 – OVS P3-089).

After signed consent, a trained technician first interviewed the participants using an interviewer- administered questionnaire. The technician asked each question and recorded all answers on the questionnaire. The forms were designed to minimize the amount of recording by the interviewer, who generally encircled or checked the appropriate findings. The questionnaire also contained the ocular surface disease index (OSDI) and the subjective grading of ocular discomfort. The interview lasted about 10 to 15 minutes.

After the interview, the participant underwent a predetermined set of eye examinations carried out by the primary investigator who was blinded to the dry eye information from the interview. The order of eye examination was as follows: visual acuity assessment by Snellen chart, fluorescein tear film breakup time (TBUT), slit-lamp examination of the anterior segment, assessment of the meibomian glands, conjunctival and posterior lid margin staining with lissamine green, and Schirmer I test. All tests and examinations were done following a standard technique by the primary investigator.

TBUT test was performed before other dry eye tests to avoid manipulation of the eyelid or instillation of anesthetics that may affect TBUT. Fluorescein staining was performed using a fluorescein-impregnated paper strip (BioGlo Fluorescein Strips, California, USA) moistened with one drop of normal saline. With the patient looking up, the fluorescein strip was applied lightly touching the inferior fornix and avoiding contact with the ocular surface. The patient then blinked several times without squeezing and kept the eye open for evaluation of the cornea under slit-lamp using a cobalt blue filter. A dry area was indicated by appearance of a progressively enlarging black spot. The TBUT was defined as the interval between the last complete blink and the first appearance of a dry spot or disruption in the fluorescein-stained tear film. The time in seconds between the last blink and the appearance of a random dry spot was recorded using a stopwatch. The TBUT test was repeated three times in each eye, and the average was calculated. The test was considered positive if the average TBUT was less than 10 seconds in one or both eyes.

Anterior segment examination with the slit lamp used diffuse illumination and 16x magnification. Corneal staining with fluorescein was evaluated using cobalt blue light. Presence of any fluorescein staining of the cornea was recorded and graded using the Oxford scheme of grading staining. Staining was graded independently in five areas of the cornea based on a six-point scale (0, 1, 2, 3, 4, 5) for a maximum grade of 5 in each of the five areas (or a total maximal score of 25). This was evaluated at least 30 seconds but less than 2 minutes after application of the fluorescein dye.

For conjunctival and posterior lid margin staining, a lissamine-green impregnated paper strip (Lissamine Green Sterile Strips, California, USA) was utilized. The strip was moistened with 2 drops of normal saline, agitated for 15 seconds, and then applied to the lower palpebral conjunctiva. Conjunctival staining with lissamine green was also graded using the Oxford scheme of grading staining. Staining was graded independently in each of the six areas of the interpalpebral conjunctiva (three areas each of the temporal and nasal conjunctivae) based on a six-point scale (0, 1, 2, 3, 4, 5) for a maximum grade of 5 in each of the six areas (or a total maximal score of 30, temporal and nasal scores combined). The presence of posterior lid margin staining with lissamine green was recorded as positive or negative.

The Schirmer I test was performed last. It was first done without topical anesthesia. Standardized pre-calibrated Whatmann filter paper 5 x 35 mm (TearFlo Sterile Strips, California, USA) was placed over the lower lid margin, at the junction of the middle and lateral thirds, while carefully avoiding to touch the cornea. The eyes were kept closed for 5 minutes, the strips then removed, and the amount of wetting of the strips recorded in millimeters. Schirmer I results were considered positive if the length of wetting was less than 10 mm in 5 minutes.

The Schirmer I with anesthesia was performed by instilling one drop of proparacaine (Alcaine, Alcon, Philippines) in the lower cul-de-sac. After 2 minutes, excess fluid was removed using a clean tissue paper. Standardized Whatmann filter paper 5 x 35 mm was placed over the lower lid margin as described above. Test result was considered positive if the length of wetting obtained was less than 5 mm in 5 minutes.

Mixed type was defined as having features of both evaporative and tear deficiency dry eye.

A total of 157 participants were recruited and evaluated. Nine patients were excluded due to eye drop use (n=8) and the presence of a corneal scar (n=1). Results from the remaining 148 participants were included in the final analyses. The demographic features of the study participants are listed in Table 1. The mean age was 52.35 years with a range from 19 to 89 years. Ninety-five (64.2%) were females and 53 (35.8%) males. 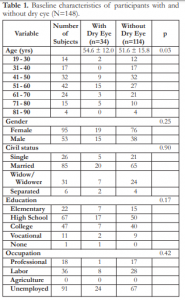 Table 1. Baseline characteristics of participants with and without dry eye (N=148).

Of the 148 participants, 34 (22.9%) fulfilled the working diagnosis of dry eye disease as defined in this study. Twenty-three (67%) were of the evaporative type, 6 (17%) the tear deficiency type, and 5 (14%) the mixed type. Subjects with dry eye disease were significantly older than those without (Table 1). However, the two groups did not significantly differ in terms of gender, civil status, education, and occupation.

The most common symptom of dry eyes was itching (76%), followed by tearing and blurry vision (Table 2). The least common symptoms experienced were fluctuating vision (41%), dry sensation (44%), and redness (44%). 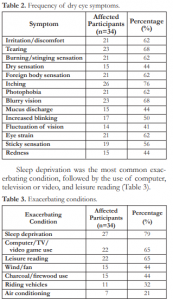 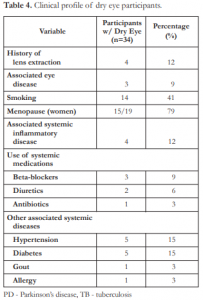 All the test results for dry eye screening were compatible with dry eye disease (Table 6). The mean fluorescein TBUT for those without dry eyes was 12.74 sec and for the dry eyes 8.84 sec. The difference between the 2 groups was significant.

The mean fluorescein corneal staining scores for those without dry eyes was 0.01 and for the dry eyes 0.294. The difference was significant.

The mean lissamine-green conjunctival staining score for those without dry eyes was 0.062 and for the dry eyes 0.809. The difference was significant. 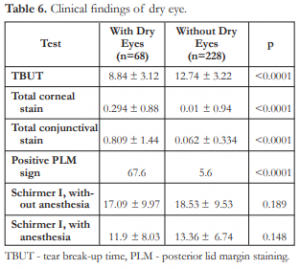 Risk factors used in the model were selected based on their probability to show significance. A cut-off p value of less than 0.3 in the bivariate analysis was used. Socio-demographic and clinical factors that fulfilled this criterion were age, gender, education, associated eye disease, smoking, and the presence of diabetes mellitus and hypertension (Table 7). Menopause among female participants with dry eye occurred in 15 out of 19 participants (79%), and was not included even though the p value was less than 0.30 because it was applicable only to female subjects. Had all subjects (15 out of 34 or 44%) been included, the p value actually exceeded the designated cut-off. 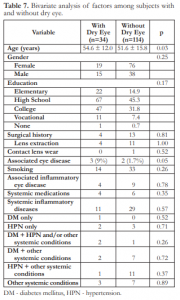 The logistic regression model included six variables and none reached significant levels (p <0.05), but putative factors (p <0.2) were identified, such as associated eye disease, smoking, and the presence of diabetes mellitus and hypertension with or without other diseases (Table 8). 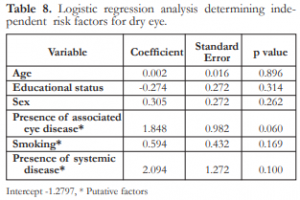 In our study, subjects with dry eye (mean age 54.6 years) were significantly older than those without dry eye and the age group of 51-60 years showed a relative peak prevalence. Our mean age was relatively older than those found in Thailand (35.2 years) and Indonesia (peak at 40-49 years)4, 6 but the results supports other studies that dry eye prevalence increased with age.

Participants with tear deficiency type of dry eye were all aged 51 years or older (mean age 58.8 years) and our result was consistent with the report by Henderson and Prough, showing that tear secretion decreased with age.10

Almost all studies on the prevalence of dry eye reported a higher prevalence among females, and this study was no exception. Almost all the female participants with dry eye in this study were postmenopausal, consistent with previous studies.

Dry eye syndrome has several causes and exacerbating factors but the symptoms experienced by those afflicted with this condition were similar. These included dryness, burning sensation, itchiness, redness, pain, ocular fatigue, and visual disturbances. In a study on an Indonesian population, symptoms of grittiness and redness were reported most frequently compared to other dry eye symptoms.6 In Australia, a study showed photophobia as the most commonly reported symptom.9 In our study, itching (76%), followed by tearing (68%) and blurring of vision (68%) were the most common symptoms.

Of those with dry eye in this study, 41% were smokers. Our logistic regression model proposed smoking as a putative risk factor based on its relatively low p value compared with the other variables. The Beaver Dam Eye Study reported a 1.5-fold increase in dry eye in current cigarette smokers and presented smoking as a modifiable risk factor.2 The study also proposed that cigarette smoke acted as a direct irritant to the eye.

Both average subjective grading of ocular discomfort and OSDI scores were higher in participants with dry eye compared to those without dry eye. The OSDI scores were significantly different and less so for the subjective grading of ocular discomfort. These scores indicated that participants with dry eyes must already experienced at least mild to moderate problems with vision, discomfort, and difficulty in doing simple and basic tasks, such as reading, driving, or watching the television. Furthermore, they might also have problems in performing or sustaining activities that required prolonged gazing, such as computer use, sewing, desk jobs, etc. These effects might translate to impaired physical functioning, decreased work time, increased medical costs, and reduced quality of life.

In summary, the prevalence rate of dry eye disease in an urban community in Manila was 22.9%. It was higher compared to those in Western countries, but closely resembled rates seen in neighboring Asian countries. A larger sample in different localities in the country will give a clearer picture of the prevalence of dry eye disease in the Philippines.