In his welcome message, PAO president Dr. Marcelino Banzon said, “It has been my resolve to strengthen the Academy from within and maintain peace and harmony among its members while promoting Philippine Ophthalmology overseas and putting us back on the world map of eye MDs. Thus, we have established partnerships and raised the levels of communication and interaction with other organizations.”
Dr. Ma. Dominga Padilla, chair of the organizing committee, highlighted the painstaking preparations behind the meeting for the last two years. “We wanted each and every attendee to emerge from this meeting enriched, not just in terms of knowledge, but also in the sense of satisfaction and pride in the privileged work that we do to preserve and restore sight.” Hence, all major fields were covered, “from the most basic aspects to cuttingedge developments.” It was former PAO president Dr. Romulo Aguilar who spea rheaded the t a lks wi th the AAO for the joint convention, paving the way for the first time that the prestigious organization held a joint meeting with a national medical society.

Among the speakers was Dr. Richard Wormald, coordinating editor of the Cochrane Eyes and Vision Group, who praised the academy for taking a lead role in promoting evidence-based medicine. He spoke on several topics, among them the impact of EBM on ophthalmic practice, when to stop generating evidence, redefining glaucoma and its management, developing health policies based on evidence, and using evidence to prioritize research. Dr. Evangeline Olivar-Santos, who has been instrumental in expanding ophthalmological care in the country, delivered the 25th Jose Rizal Memorial lecture on “Reaching the Unreached, Serving the Unserved.” Santos started rural work in her hometown in Ilocos Norte by performing free surgeries and consultations with a team. In 1983, the Helen Keller International tapped her to help initiate and implement a primary-eye-care program in Bicol. “I was involved in the training of health workers, clinic teachers, and even traditional healers in the region to screen, manage, and refer eye cases,” she narrated. “But soon after we have trained them we found ourselves with a big problem. There were so many blind persons waiting for an eye doctor to attend to them.” This moved her to conceptualize the Modified Residency Training Program (MRTP) whose mission was to provide appropriate and accredited ophthalmology training to rural doctors who would be committed and dedicated to serve the poorest of the poor. The drive has borne fruit. “The average number of cataract surgeries nationwide for the past three years is 60,000,” Santos disclosed. “MRTP is doing seven percent of this. 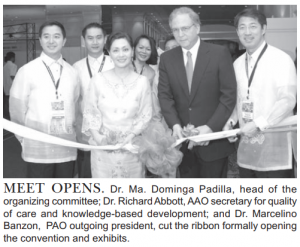 The number may not be impressive until one realizes that almost all of these are being done on the poorest of the poor.” Meanwhi le, Dr. Rober t Nus senbl a t t , head of the National Eye Institute in Bethesda, Maryland, delivered the 60th anniversary lecture on “Cutting-Edge Management of Ocular Inflammation.” Symposiums were also held on the following topics: pterygium and ocular infection, management of difficult to treat corneal infections, mycobacterium and the anterior segment of the eye, a ten-year perspective of eye banking in the Philippines, laser treatment of the retina, evidencebased ophthalmology, strabismus in refractive surgery patients, and emerging trends in refractive surgery.