Outcomes of Retinopathy of Prematurity Screening at a Tertiary Government Hospital

Retinopathy of prematurity (ROP) is a serious consequence of better management and increasing survival of premature infants. It is a major cause of preventable blindness among premature infants if recognized and treated early.1 Timely screening of premature infants at risk of developing ROP is important in its management as it can result to improved visual outcomes. The American Academy of Pediatrics, the American Association for Pediatric Ophthalmology and Strabismus, and the American Academy of Ophthalmology have jointly recommended screening of infants with a birth weight of ≤1500 gm or born at a gestational age of ≤32 weeks, and that screening should begin between 4 and 6 weeks postnatally or 31 to 33 weeks of post- conceptional age, whichever is earlier. Likewise, screening should also be done on selected infants with birth weight between 1500 and 2000 gm or gestational age of more than 32 weeks with an unstable clinical course.

Timely diagnosis and treatment are essential in halting the progression of ROP and subsequent development of its sequelae. Clinical practice patterns on the management of severe ROP are constantly changing depending on recent innovations that promise to bring about better functional and structural outcomes in eyes afflicted with ROP. Based on the Cryotherapy for Retinopathy of Prematurity (CRYO- ROP) study, transscleral cryotherapy significantly reduced the rate of unfavorable anatomical and visual outcomes in threshold and prethreshold disease.3-8 Transpupillary laser treatment, when compared to cryopexy, showed better visual outcome as myopia induction is less likely and there is earlier regression of ROP.9 In addition to the advantages of laser ablation therapy, there is ease of reaching the posterior pole, less trauma to ocular tissues, decreased need for general anesthesia, and reduced postoperative morbidity. Reduction of unfavorable visual outcomes were observed with early treatment.10 Studies on the pathogenesis identified vascular endothelial growth factor (VEGF) as a key factor responsible for the progression of ROP. The use of anti-VEGF agents, primarily intravitreal bevacizumab, is an emerging treatment for ROP. It is equally as effective as laser therapy for Stage 3 ROP Zone I disease. It can be used as adjunctive treatment prior to laser therapy and vitrectomy for better intraoperative visualization.

Long-term and regular follow up is essential to monitor progression or regression of the disease and to recognize and address morbidities, such as chronic vitreo-retinal traction, myopia, anisometropia, amblyopia, and strabismus/pseudostrabismus.

In spite of the efforts to emphasize timely screening for ROP and parental education of the need for subsequent follow up, there is a lack of reports that assess the efficiency of ROP screening programs. Therefore, this study determined the eventual outcomes of the retinopathy of prematurity (ROP) screening program, such as the prevalence of ROP among preterm infants screened, stage of the disease, administered treatment, treatment rate, and follow-up rate of patients that were screened, and refractive outcomes.

Medical records of all premature infants referred by the pediatrics department for retinopathy of prematurity screening at a tertiary government hospital from January 2008 up to July 2012 were obtained. The ROP screening protocol recommended that all infants with birthweight of 1500 grams or less and/or gestational age of 32 weeks or less, and infants with birthweight between 1500 to 2000 grams and/or gestational age of more than 32 weeks with unstable clinical course, should undergo ROP screening.

The screening procedure consisted of a dilated fundus examination using a binocular indirect ophthalmoscope and findings were recorded in a standard ROP screening form. Parents were advised to follow up at the eye center upon discharge either by the pediatric resident or the pediatric ophthalmology fellow. Data on the eventual outcomes which included the number of infants who developed some form of ROP among those referred for screening, stage of the disease, treatment rate, mode of administered treatment, follow-up rate of patients diagnosed with ROP, and refractive outcomes were collated and analyzed.

A chi square test was performed to determine the association between refractive outcomes in patients with and without ROP and treatment administered.

Staging of ROP was based on the Committee of the International Classification of ROP Revisited (ICROP). Thirty-five eyes (38.08%) with ROP were classified as stage 2, followed by 23 (25%) with stage 1, and 13 (14.13%) stage 3. There were 9 cases of cicatricial ROP, one case of aggressive posterior ROP (APROP), and one case of prethreshold disease without ROP staging categorized as unspecified.

Twelve eyes (13.04%) diagnosed with ROP received treatment that included laser therapy in 4 eyes (33.33%), intravitreal bevacizumab injection in 4 eyes (33.33%), cryotherapy in one eye (8.33%), and laser therapy plus intravitreal bevacizumab injection in 3 eyes (25%). Seven eyes (7.60%) required treatment but parents did not comply. 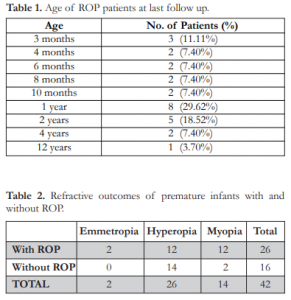 Different institutions have different prevalence rates of ROP among premature infants screened. In our center, a tertiary government hospital, 23.71% of the infants screened developed some form of ROP; this rate was lower than those obtained in the CRYO-ROP3,4 and Early Treatment for Retinopathy of Prematurity (ETROP)10 studies. The lower rate could be attributed to a smaller population in our study as compared to the large multicenter trials. Under-detection of the disease was also likely since not all high-risk premature infants were referred for screening. The bilateral rate for our study (90.21%) was, however, higher compared to the ETROP study (79%).

In our study, 19 of 92 eyes (20.65%) developed severe ROP necessitating intervention. In spite of all efforts exerted to institute treatment in these eyes, compliance rate was only 63.16% (12 of 19 eyes). Possible reasons for noncompliance included financial constraints, inadequate or inappropriate knowledge regarding the consequences of the disease, poor medical condition of the affected infants, and an unwarranted fear of the untoward effects of the contemplated procedure. Because of the beneficial effects of treatment on structural and functional outcomes, a more proactive approach in patient education and allaying of fears and misconceptions of the parents or guardians must be undertaken.

Based on the CRYO-ROP study, the initial results indicated that cryopexy could significantly reduce the rate of unfavorable outcomes, such as retinal detachment, macular folds, or retrolental mass by approximately 50% at 1 year.3,4,5,6,7,8 Transpupillary laser treatment, when compared to cryopexy, showed better visual outcomes as myopia induction is less likely and there is earlier regression of ROP.9 In addition to the advantages of laser ablation therapy, there is ease of reaching the posterior pole, less trauma to ocular tissues, decreased need for general anesthesia, and reduced postoperative morbidity. Reduction of unfavorable visual outcomes were observed with early treatment.10 Most of the ROP patients in our center received laser therapy since it has been proven to be advantageous than cryotherapy.9,12 Laser photocoagulation gained popularity and is as effective as cryotherapy in preventing the cicatricial effects of ROP.

Vascular endothelial growth factor (VEGF) has been linked to the pathogenesis of proliferative ROP.13 Anti-VEGF therapy has been shown to reduce pathological new vessel formation. It can be used alone or as an adjunctive treatment for ROP.14 With its off-label use, larger studies are needed to establish anti-VEGF therapy as a safe compound in ROP (both locally and systemically) before general clinical use can be suggested.15,16 In a study by Mintz- Hittner, intravitreal bevacizumab monotherapy, as compared with conventional laser therapy, in infants with stage 3+ ROP showed significant benefit for zone I but not zone II diseases.17 Our institution has started giving this option to qualified patients.

Out of the 46 patients diagnosed with ROP during screening, only 27 patients had follow-up examinations. Sixteen patients (10.81%) without ROP were also followed up. Follow-up rates for both groups were low compared to other studies, indicating insufficient education or instructions given to parents by healthcare-givers, as well as financial constraints. Geographical factors may also play a role in nonattendance to follow-up clinics. All efforts must, therefore, be exerted to ascertain accessibility of the institution to the patient and if not, proper referral to an ophthalmologist near the patient’s home who can do continuing ROP screening and post-treatment follow ups once the infant has been discharged.

Eyes treated with laser photocoagulation were significantly less myopic than those treated with cryotherapy.18 In our study, there was equal occurrence of hyperopia and myopia for those treated with laser therapy alone. Two eyes that received intravitreal injection of bevacizumab were emmetropic. Three eyes that received laser treatment and intravitreal anti- VEGF injection were found to be myopic and one eye was noted to have significant astigmatism (≥2.00 cylinder). Refraction was also obtained among the 16 patients without ROP on their follow-up examination. Majority were hyperopic and two eyes myopic (Table 3).

In spite of the apparent difference in refractive outcomes between infants who developed ROP and those that did not, statistical analyses did not show any association between these two variables. Likewise, the treatment modality used for treating ROP did not affect the subsequent refractive error (Table 3). This finding should be regarded with caution since the sample of premature infants receiving treatment and with available refraction on follow up was small. Nonetheless, it is important to obtain the refraction during the follow-up examination and monitor them for proper visual maturation and prevention of amblyopia.

Taking into account the outcomes of our center’s ROP screening protocol, the referral system must be strengthened. Pediatricians and neonatologists should refer all high-risk infants for ROP screening in order to obtain the true incidence of ROP in our center. As ophthalmologists, it is our role to diagnose the disease accurately and educate parents regarding the disease, treatment options, and sequelae in the absence of treatment and follow up. A comprehensive and sufficient chair-time with the parents prior to discharge will improve the follow-up rate of patients. The importance of regular follow-up examinations should be stressed to parents. Instructions as to the date, time, and place for follow up should be provided by both ophthalmologist and pediatrician to ensure their compliance. Contact information of parents must be obtained and recorded. In case of default, all efforts must be exhausted to locate these patients and encourage the parents.