PRESBYOPIA is the loss of visual ability to focus on close objects due to a decrease in the accommodative capacity of the eye. This is a natural and normal phenomenon that comes with aging. Presbyopia is expected to affect 2.3 billion individuals worldwide by 2020. Because it is a condition that cannot be prevented, there is a constant search for simple effective ways to deal with it. Dif ferent treatment modalities for presbyopic correction have been developed, from the usual spectacles to monovision or bifocal contact lenses, multifocal intraocular lenses (IOLs), and refractive and surgical procedures. In the 1970s, monovision treatment was introduced as an alternative to corrective reading glasses. It allowed an individual to see clearly at the two primary distances of concern without the use of spectacles. Through the years, some have thought of it to be the best treatment for presbyopia. The concept of monovision has been used in several new procedures in refractive surgeries, namely LASIK monovision correction and monovision conductive keratoplasty.
The outcomes of monovision correction are favorable but have not been widely reported. This study determined the success rates and effects of monovision contact lens and compared them with those of reading glasses for early emmetropic presbyopic eyes.

METHODOLOGY
A total of 50 subjects from the employees’ clinic of St. Luke’s Medical Center were enrolled into the study from February 2006 to August 2006. All patients suspected of having early presbyopia underwent a complete ophthalmologic examination and medical evaluation. Demographic data and complete medical history were obtained. Subjects recruited were between 36 and 45 years of age, who were diagnosed with early emmetropic presbyopia, with no previous spectacle correction for near vision. Uncorrected distance visual acuity should have been 20/25 or better in both eyes, and presbyopic correction should have been between +1.00D and +2.00D. Excluded were patients with contraindications to soft contact lens wear, namely using eye medications except for lubricants; existing ocular pathologies such as cataract, corneal opacity, glaucoma, retinal disease, eye infection, and severe dry-eye disease; and history of previous ocular surgery or trauma. All eligible subjects were enrolled after signing the informed-consent form.

Each subject underwent the following tests prior to the start of the intervention:
1. Visual-acuity determination using the EDTRS chart at 2 meters for distant vision and the EDTRS near-vision chart at 33 cm for near vision;

Using a set of computer-generated random numbers, patients were then randomly assigned to one of two treatment sequences starting with either monovision contact lens or binocular reading glasses. Group 1 used monovision contact lens (76% lotrafilcon A, Focus Night and Day, CIBA Vision Corporation, Duluth, GA, USA) for 2 weeks. The nondominant eye was fitted with plus-power disposable soft contact lens, the power of which was based on the monovision loose-lens trial. Contact lenses were worn for extended periods. Group 2 used bilateral reading glasses with reading adds from +1.00D to +2.00D for 2 weeks. After 3 days of “washout” period, participants were crossed over to the other group for another 2 weeks. Subjects were followed up on the second, fifth, and 14th day, and monitored for any adverse events such as eye redness, pain, itchiness, excessive tearing, or any discomfort. All complaints, intolerance to, and unacceptability of the contact lens during the two-week period were also noted. Subjects with disabling intolerance were withdrawn from the study and recorded as “nonacceptance.” At the end of each two-week period, the following were done:

• Fully Acceptable – patient is fully functional for both distance AND near with minimal to no discomfort;
• Moderately Acceptable – patient is functional either for distance OR near with minimal to no discomfort OR patient is functional for both distance AND near with moderate discomfort;
• Not Acceptable – patient is not functional for both distance AND near with or without discomfort. Descriptive statistics, such as frequency distribution and proportions, were used. Chi-square was used to test for difference in the proportion of male and female patients according to their level of acceptability. One-way analysis of variance was used to determine differences in the age distribution and reading adds among those who did not accept, moderately accepted, or fully accepted monovision. To determine significant changes after the treatment for both binocular glasses and contact lenses, pre- and postintervention values were compared within each treatment group. The posttreatment values of patients for both binocular and monovision use were also compared. Paired t-tests were performed for these variables, and p values ≤ 0.05 were considered statistically significant. Pearson correlation was also used to determine the correlation between changes in stereoacuity and reading adds. The research followed the tenets of the Declaration of Helsinki and informed consent was obtained from all the subjects after the nature and possible consequences of the study were explained. The Institutional Review Board and Ethics Committee approved the protocol and informed-consent form.

Forty-nine of the 50 participants completed the study. Thirty-three (66%) were females and 17 (34%) were males. The mean age was 41 (Table 1). Most of the subjects (43) were right-eye dominant. Among the 50 patients, 19 fully accepted the use of monovision contact lens, 22 moderately accepted, and 9 did not. Only one patient was unable to complete the twoweek period of use because of intolerance unrelated to monovision. The most common reasons for nonacceptance were related to poor visual adaptation to monovision (difficulty focusing, 3; headache, 1; dizziness, 1). Four cases of nonacceptance were because of contact-lensrelated reasons (redness, 2; foreign-body sensation, 2). Younger presbyopes and lower reading-adds power were statistically significant variables favoring full acceptance of monovision (p < 0.01) (Table 2). There were no significant differences in the proportion of males and females among the three levels of responses (Table 2). The level of acceptability was also compared between patients who were first assigned to the binocular reading glasses group and those who were first assigned to monovision-contact-lens group. Eleven percent of those who were first assigned to binocular reading glasses did not accept monovision, 50% moderately accepted, and 38.5% fully accepted. On the other hand, 25% of those who started with monovision contact lens did not accept the treatment, 37.5% moderately accepted, and 37% fully accepted. The difference between the two groups was, however, not statistically significant (Table 2).

Stereoacuity
The use of binocular reading glasses for near vision significantly increased stereoacuity by 13.6 ± 20.08 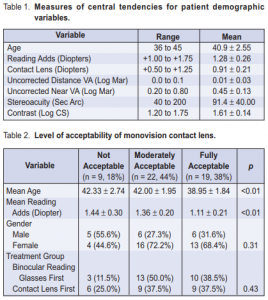 DISCUSSION
The success rates for monovision contact lens vary between 60% and 80% depending on study design and population. Although there are differing definitions, success rate is commonly defined as the percentage of patients who are able to adapt and accept its inherent visual compromises. Ideally, the monovision patient should see clearly at all distances and should not have problems in functioning at home, while driving, or at work. Some of the failures cited in these studies were either related to contact-lens intolerance or visual disturbances attributable to monovision. In a case series by Jain and coworkers, 20% of patients were dissatisfied with their outcomes, citing blurry vision as the main cause. In another monovision study, around 28% of presbyopes were found to be interested in mono 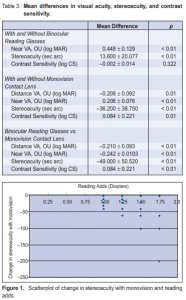 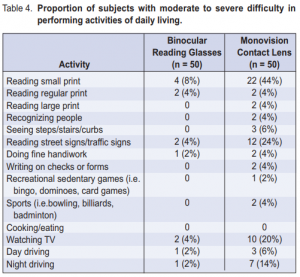 vision correction. Sixty four percent of those who used monovision were still using it after one month with 54% of them willing to continue with the treatment. A literature review comparing monovision treatment with prescription reading glasses showed visual performance of monovision patients was comparable with control patients wearing spectacle correction provided the reading add did not exceed +2.5 diopters. Some studies compared monovision contact lens with other presbyopic bifocal-contact-lens corrections. In a controlled clinical trial comparing the visual performance of three presbyopic contact-lens corrections, monovision correction provided the best visual acuity at distance and near compared to soft diffractive bifocal contact lenses and near-center concentric bifocal designs.  Few studies have established the use of monovision in the treatment of presbyopia. The lowest success rates ranged from 50% to 75%8 and the highest 96%9 to 97.6%. In a literature review by Johannsdottir and Stelmach, the average success rates among early presbyopic patients were reported at between 70% and 80%. Likewise, a comprehensive review of the optometric literature on contact lens monovision correction demonstrated a success rate of 76%. Our study showed a success rate of 82% (full and moderate acceptance), which is comparable to published data, although only 34% had full acceptance. This level of acceptability was independent of the treatment the patient was first assigned to (i.e. binocular reading glasses or monovision contact lens). Factors like younger presbyopes and lower reading add power, which favor acceptance of monovision, are also consistent with other studies. In terms of visual acuity, other studies have shown that binocular visual acuity, both distance and near, was lower for monovision than binocular vision. Jain and associates found this to be true with low- and high-contrast visual acuity under normal room illumination, while Johannsdotir and Stelmach found this difference only under low-illumination conditions. In our study, highcontrast visual acuity was measured under normal lighting condition and a significant difference in both binocular distance and near visual acuity between monovision and binocular reading glasses was seen. As in other studies, binocular vision was better than monovision. Similarly, stereoacuity was better with the use of binocular reading glasses compared to monovision, and stereoacuity was worse with higher reading adds power. Our finding was similar to the results of 3 studies reviewed by Johannsdotir and coworkers. The reduced stereoacuity for monovision reported by one of the studies was around 41.5 sec arc, which is comparable to our finding of 36.2 sec arc. Comparing bifocal and monovision contact lenses, a significant change of 35 to 37 sec arc was found. Our study showed a mean difference of 49 sec arc between the two modalities and this difference may be attributed to the different types of stereoacuity test used. Contrast sensitivity is unaffected by reading glasses, but is significantly reduced by monovision. Comparing the two modalities, previous data showed that monovision has poorer contrast sensitivity than bifocal spectacles. This finding was also supported by the paper of Johannsdottir and coworkers. In the present study, monovision-contactlens use showed a slight reduction in contrast sensitivity, which is equivalent to an increase of a total of 2 incorrect letters on Rabin Contrast Sensitivity Test. In terms of quality of life, participants experienced more difficulty in activities of daily living with the use of monovision contact lens than with binocular reading glasses. This finding correlates well with the other findings of decreased binocular distance and near visual acuity, stereoacuity, and contrast sensitivity when using monovision contact lenses. Other studies have found that for activities requiring good visual acuity (i.e. letter editing/reading), task performance decreased minimally with monovision.
These studies also reported a decrease in task performance for activities that require moderate stereopsis. These difficulties may be attributed to a reduction in visual acuity and stereoacuity causing disparity in images seen with monovision treatment. It is also possible that these difficulties could be overcome with adaptation after using monovision for longer periods of time since the brain may adapt to the new condition. Although previous studies have shown that acclimatization periods may be at least 3 weeks, 3, 6 a longer acclimatization period would have increased the risk of complications and intolerance associated with prolonged use of extendedwear contact lenses. As a compromise, we limited our study period to 2 weeks. Our study showed that reading glasses remain the preferred and better treatment for presbyopia. However, monovision may be offered to early presbyopes with low reading add requirements to lessen their dependence on reading glasses, which they may find inconvenient and cosmetically unacceptable. For older patients, monovision should be reserved for selected and highly motivated cases only. Monovision contact lens may be used as a screening tool prior to any surgical or irreversible monovision treatments such as near-vision conductive keratoplasty or monovision LASIK since not all patients are amenable to monovision. In summary, monovision soft contact lens is an effective alternative to reading glasses to improve near vision among early emmetropic presbyopes. Younger presbyopes and lower plus power are favorable factors for monovision acceptance. Binocular reading glasses are superior to monovision contact lens in terms of visual acuity, quality of vision, and quality of life.