Methotrexate for Sympathetic Ophthalmia: A Report of 3 Cases

Sympathetic ophthalmia is thought to be a result of an autoimmune reaction against the exposed ocular antigens of the inciting eye.10 The fellow eye, referred to as the sympathizing eye, develops ocular inflammation as part of this autoimmune reaction.7 The typical presentation of sympathetic ophthalmia is bilateral diffuse uveitis. Patients reported blurring of vision, pain, tearing, and photophobia. The classic finding is a granulomatous anterior uveitis with mutton-fat keratic precipitates. In certain cases, anterior segment findings may be mild inflammation that presents with non-granulomatous features. Posterior pole examination may reveal vitritis, retinal vasculitis, choroiditis, and papillitis.1 Optic disc swelling and exudative retinal detachment are early findings of the disease, while mutton-fat keratic precipitates are more prominent in chronic and recurrent cases. Dalen-Fuchs nodules, which are yellow-white nodules beneath the retinal pigmented epithelium layer, are seen in a third of cases.9

The diagnosis of sympathetic ophthalmia is made based on history and clinical examination findings. Ancillary diagnostics such as fluorescein angiography, indocyanine green angiography, fundus autofluorescence, and optical coherence tomography are useful in confirming the diagnosis and in monitoring the disease.11 Management includes high dose systemic steroids and steroidsparing immunosuppressants (SSI).1 Methotrexate, azathioprine, cyclosporine, mycophenolate mofetil, cyclophosphamide, and chlorambucil have been used as first-line SSI for sympathetic ophthalmia. Adalimumab, pemrolizumab, and tacrolimus have
been used for refractory cases.1,12-15 In the Philippines, methotrexate is the most affordable and accessible drug option. Hence, this drug is commonly prescribed as a first-line SSI for patients with sympathetic ophthalmia and other uveitic conditions that require prolonged therapy. Methotrexate is an antimetabolite that acts by suppressing cellular proliferation, accelerating T-cell apoptosis, increasing concentrations of endogenous adenosine, and altering the cytokine and humoral response.16-17 It has been found to be moderately effective in controlling inflammation and decreasing the need for steroids.16

In this report, we presented 3 patients diagnosed with sympathetic ophthalmia managed at the Philippine General Hospital between 2017 and 2019. All patients were treated with methotrexate and steroids in the form of oral prednisone, periocular triamcinolone, and topical prednisolone. In addition, all patients also received folic acid at a dose of 5 mg weekly which was commenced at the time of initiation of methotrexate.

A 19-year-old male presented with 1-month duration of blurred vision and redness of the left eye. He had a history of a penetrating trauma on the right eye 4 years prior to consult. On initial evaluation, the right eye had no light perception and appeared phthisical. The left eye had a BCVA of 20/20 with active panuveitis signified by the presence of anterior chamber cells, vitritis, snowbanking, perivascular sheathing, chorioretinal scars, and white, submacular opacities. Topical and periocular steroids were initiated in addition to a topical cycloplegic agent. Laboratory work-up did not reveal any other etiology for the ocular inflammation. One month after commencement of local treatment, the panuveitis became inactive. VA was maintained at 20/20. Patient was lost to followup, until 18 months later when he came back due to blurred vision of the left eye. VA was 15/200. Clinical examination revealed active panuveitis. Periocular triamcinolone (0.1 mL) was injected and topical steroids and cycloplegics were restarted. However, he was poorly compliant with topical therapy and uveitis persisted. Methotrexate (12.5 mg weekly) and oral prednisone (0.5 mg/kg/day) were started, with inflammation completely subsided after 6 weeks. Oral and topical steroids were gradually tapered. By the 3rd month after initiation of methotrexate, the patient was completely off steroids, the eye remained quiet, and VA was 20/20. The eye remained quiet for 1.5 years and methotrexate was gradually tapered and stopped. However, 1 month after discontinuing methotrexate, uveitis recurred (Figure 1). Oral steroids and methotrexate were re-initiated. The patient is currently maintained on methotrexate 12.5 mg weekly with good control of intraocular inflammation and preservation of VA. There has not been any systemic complication from this regimen. 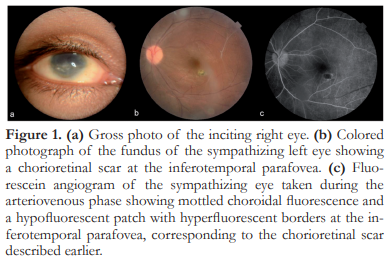 A 39-year-old female underwent repair of a traumatic corneal perforating injury and lens extraction of the left eye at a different institution. Six months later, she noted progressive blurring of vision of both eyes and consulted at our institution. BCVA was 20/40 OD and counting fingers (CF) OS. Slit lamp examination revealed bilateral non-granulomatous anterior uveitis. In addition, the left eye had an oblique corneal scar extending from the 11 o’clock limbus to 4 o’clock limbus and was aphakic. Indirect ophthalmoscopy of both eyes revealed hyperemic optic discs with multiple nummular hypopigmented chorioretinal lesions in the periphery (Figure 2). The patient was diagnosed with sympathetic ophthalmia and was started on prednisolone eye drops hourly, atropine sulfate eye drops 3x daily on both eyes, and oral prednisone given at 1 mg/kg/day. Initiation of methotrexate was delayed due to elevated baseline liver function tests. The anterior chamber inflammation was controlled within a month of steroid treatment. BCVA improved to 20/20 OD and 20/100 OS. Two months into therapy, the patient developed cushingoid facies and significant weight gain, which necessitated tapering of the steroid dose. Methotrexate was initiated at 15 mg weekly after obtaining clearance from the patient’s internist; the dose was subsequently titrated down to 12.5 mg weekly on the 9th month of therapy. Recurrence of intraocular inflammation occurred when the patient failed to take her medications for 2 weeks. The patient was again started on methotrexate 12.5 mg, prednisone 20 mg, and prednisolone eye drops every two hours on both eyes daily. Inflammation was controlled within 6 months, allowing us to gradually taper the dose of steroids. The patient was advised to take methotrexate 12.5 mg weekly and prednisone 5 mg daily as maintenance therapy, and there have been no recurrences on this regimen for 6 months. BCVA remained at 20/20 OD and 20/100 OS. 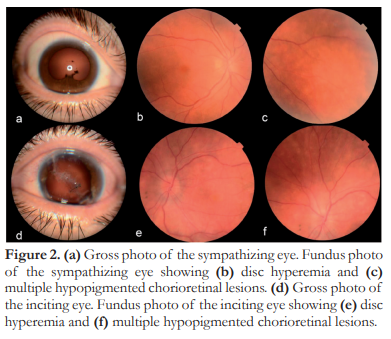 A 35-year-old male sought consult at our institution 12 hours after his right eye was hit by a rock. Presenting VA was no light perception OD and 20/20 OS. The patient was advised to undergo enucleation of the right eye for posterior globe rupture; however, he did not consent and was lost to follow-up. One month later, the patient returned for blurring of vision OS. Upon examination, BCVA was 20/50 OS. The left eye had anterior uveitis, optic disc edema, and multiple areas of serous retinal detachments affecting the macula. The right eye had corneal neovascularization, stellate-shaped pupil, and rubeosis. The anterior chamber was quiet and the eye was hypotonic. The patient was diagnosed with sympathetic ophthalmia and was started on prednisolone eye drops every 2 hours and atropine sulfate 3x daily on both eyes. He was also given prednisone at 1 mg/kg/day and methotrexate at 15 mg weekly. The inflammation was completely controlled by 6 months of therapy. The fundus examination at this period showed disc hyperemia and resolution of the retinal detachment described earlier (Figure 3). BCVA improved to 20/20 OS. The eye has remained quiet for 3 months on 15 mg of methotrexate weekly, 7.5 mg of oral prednisone daily, and prednisolone eye drops 4x daily. 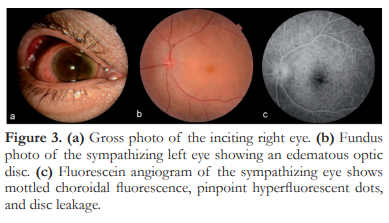 In the Philippine General Hospital, 4 out of the 4 cases of sympathetic ophthalmia diagnosed within the past 3 years were related to penetrating eye trauma. All patients were given steroids and methotrexate. One patient had incomplete medical records; hence, only 3 patients were included in this series.

The onset of sympathetic ophthalmia may be any time from a week up to several decades after the ocular injury or surgery. Based on literature, approximately 17, 50, 65 and 90% of diagnoses are made within 1, 3, 6, and 12 months of the inciting event, respectively.1,18 In this report, 2 out of 3 patients developed sympathetic ophthalmia within 1 year of the injury. The third patient developed it 4 years after the inciting event.

Due to the rarity of the condition, there is no large clinical trial on the treatment of sympathetic ophthalmia. Sympathetic ophthalmia is managed medically using immunosuppressants. Corticosteroids are typically administered in combination via the topical, periocular, oral, or intravenous routes. High-dose oral prednisone is started at 1-2 mg/kg/day and is tapered over 3 to 4 months. Intravenous pulse steroid therapy in the form of methylprednisolone at a dose of 1 gram per day for 3 days is an option for patients with severe intraocular inflammation.

Topical cycloplegics are likewise prescribed to prevent synechiae formation.1 All patients in this series were initially managed using topical and either oral or periocular steroids. Ocular inflammation in all 3 patients responded well to steroid therapy. However, Case 2 developed Cushingoid syndrome which necessitated adjustment of the steroid dose. All patients were started on methotrexate to achieve long-term control of intraocular inflammation with the lowest dose of oral steroids.

The use of SSI is considered in patients with active intraocular inflammation who are poorly responsive or poorly-tolerant to steroids. Cyclosporine has been identified as a useful SSI drug for patients unresponsive or intolerant to prednisone.1,19 High-dose chlorambucil has also been shown to be effective in induction of a long-term, drug-free remission of sympathetic ophthalmia.20 Kim et al. reported successful treatment of refractory pediatric sympathetic ophthalmia using adalimumab, a TNF-α inhibitor.21 Other SSIs that have been shown to be effective for sympathetic ophthalmia include methotrexate, azathioprine, mycophenolate mofetil, cyclophosphamide, tacrolimus, daclizumab, infliximab, and pemrolizumab. Azathioprine is the most prescribed SSI for sympathetic ophthalmia in Singapore and India, while mycophenolate mofetil is the drug of choice in United Kingdom.22

Many of these SSIs are available locally at a wide price range. Methotrexate costs as low as 11 Philippine pesos ($0.55) per 2.5 mg tablet,23 which makes it the most affordable treatment for patients who require prolonged immunosuppressant therapy. Low doses ranging from 7.5 mg to 25 mg per week are administered intermittently with folic acid supplementation. It typically requires 6 to 8 weeks for the drug to act completely; thus, it is initially given with high dose steroids. The oral corticosteroid is tapered or discontinued after improvement in the ocular inflammation is noted. Methotrexate is usually administered for 6 to 24 months at the lowest effective dose, and then tapered over 3 to 12 months. The proper tapering schedule has not yet been established; thus, the dosage regimen is usually tailored to the patient.24 Based on literature search, Wong first reported in 1966 about a case of sympathetic ophthalmia which responded immediately to methotrexate.14 However, this report may have been confounded with the use of steroids on the same patient. Tsang and Gottlieb reported long-term remission of sympathetic ophthalmia with methotrexate.15 In our report, 12.5 mg to 15 mg methotrexate proved to be effective in controlling ocular inflammation in sympathetic ophthalmia, allowing the steroid dose to be brought down below 10 mg a day in the 3 patients.

Side effects of methotrexate include elevation of liver enzymes, severe nausea, and fatigue, which usually occur within the first 3 months of therapy. In addition, patients may develop cytopenia and interstitial pneumonitis. Bone marrow suppression and liver cirrhosis are rare but serious adverse events. Compared to other SSIs, methotrexate is not associated with increased risk for overall or cancer-related mortality.25 To date, none of our patients developed systemic complications due to methotrexate.

Our study showed that good visual outcomes and adequate inflammation control can be achieved with methotrexate and low-dose prednisone. BCVA at last visit was 20/30 or better in the sympathizing eye in all 3 patients. This case series showed that good outcomes are attainable for the sympathizing eye with the use of steroids and methotrexate. The poor visual outcomes of the inciting eyes were mainly attributed to the severe ocular trauma. Regular eye examination and compliance to maintenance medications were the key factors in sustaining good visual outcomes in the long-term period.

This small case series demonstrated the effectiveness and safety of methotrexate for the control of intraocular inflammation in sympathetic ophthalmia. All 3 patients who began methotrexate were able achieve uveitis control and good visual outcome with oral prednisone doses of 10 mg or less a day. Methotrexate was also well-tolerated; no adverse side effects were reported.