Lupus vulgaris of the ocular adnexa

LUPUS vulgaris is a chronic and progressive form of tuberculosis of the skin, occurring in individuals with
moderate to high degree of immunity. Cutaneous tuberculosis accounts for approximately 2.5% to 10% of all cases of extrapulmonary tuberculosis.1 Lupus vulgaris has been reported to be the most common form of cutaneous tuberculosis in most case series worldwide. It is the most common type in Europe and Hong Kong.2 To date, there are no published data on its incidence in the Philippines. Lupus vulgaris is at times difficult to diagnose since it also has the most variable presentation. It has a tendency to spread, causing destruction of surrounding structures. In some cases, it is self-limiting. We report a case of lupus vulgaris that has caused significant disfigurement of the right eyelid and malar area, but has been prevented from spreading to the ocular surface and causing visual impairment with prompt and correct diagnosis and adequate treatment.

CASE REPORT
A three-year-old boy consulted at the University of the Philippines–Philippine General Hospital because of a nonhealing wound over the right eyelid and cheek. The condition started 4 months prior to consultation as a small, nontender, nodular skin lesion at the right medial canthal area, which progressively increased in size and ruptured, spreading to involve the right eyelid and malar area. The wound was cleaned with a concoction from guava leaves and occasionally with povidone–iodine solution. The wound enlarged, with purulent discharge, increased swelling, and redness of surrounding areas, causing the eyelid to close. The parents noted multiple enlarged cervical lymph nodes. Review of history revealed the child had recurrent bouts of cough with poor weight gain. No similar illness was reported among the patient’s family and household members, and none had been hospitalized for any specific disease. Examination revealed a malnourished, irritable child in moderate respiratory distress. There was a 5.5 cm x 6.0 cm well-circumscribed, reddish skin lesion, with alternating areas of ulceration and granuloma formation, topped with reddish papules, pustules, honey-colored crusts and necrotic tissue, overlying the right eyelid and malar area and extending to the right lacrimal sac and right nasal area. There was destruction of the right lower eyelid, with ectropion, madarosis and exposure of underlying orbicularis oculi muscle. There was no lagophthalmos or fixation to the underlying bone. The globe was intact, with good mobility, but the conjunctiva was very congested (Figure 1). Visual acuity was finger play at 6 meters. He had normal sclera, clear cornea, formed anterior chamber, normal iris, ocular tension soft to palpation, and normal posterior pole. The left eye and its surrounding structures were essentially normal. The patient also had multiple, bilateral, enlarged, matted, nontender, submandibular, cervical, and inguinal lymph nodes. There was a solitary, discrete, erythematous ulcer with raised borders at the left upper back. There were intercostal retractions, rhonchi, and crackles on both lower-lung fields. The rest of the systemic findings were normal. The patient was admitted to the Ophthalmology ward with an initial impression of preseptal cellulitis, community-acquired pneumonia, and malnutrition. He was worked up for sepsis and started on intravenous oxacillin 200 mg/kg/day and cefuroxime 100 mg/kg/day. The wound was cleaned with hydrogen peroxide once daily and dressed with erythromycin ointment 4 times a day. Carbomer eye gel was applied to the right eye 4 times a day as a preventive measure against exposure keratitis. Upon consultation at the External Disease Clinic, the periorbital lesion was assessed to be TB granuloma, probably lupus vulgaris, prompting work-up for tuberculosis. With initiation of intravenous antibiotics, there was note of significant improvement in the skin lesions with decrease in swelling and amount of purulent discharge, and sloughing off of necrotic debris and crusts revealing reddish, raw tissue with hyperkeratotic, raised borders (Figure 2). Complete blood count showed moderate leukocytosis and microcytic, hypochromic anemia. Blood culture was negative for growth. Wound gram stain showed Grampositive cocci in pairs with polymorphonuclear neutrophils per oil-immersion field. Wound culture showed moderate growth of Staphylococcus aureus and Group A beta-streptococcus, which were sensitive to the intravenous and topical antibiotics administered. Mantoux test was grade 4+ with abscess formation (Figure 3). Chest X-ray was negative for tuberculosis. Sputum and gastric acidfast bacilli (AFB) smears and skin AFB culture were negative. Skin biopsy AFB stain demonstrated one acidfast bacilli per 100 fields.

The patient was started on antituberculous regimen of isoniazid 80 mg/day, rifampicin 80 mg/day, and pyrazinamide 250 mg/day. There was marked, gradual healing of the skin lesion in the weeks that followed. With completion of the intravenous antibiotics and resolution of pneumonia, the patient was discharged from the hospital. Hematoxylin and eosin-stained histologic sections from the skin biopsy revealed nodular granuloma formation with epithelioid histiocytes and Langhans giant cells, changes consistent with lupus vulgaris (Figure 4). The skin lesion continued to show healing on follow-up with scarring at the lateral canthal area, with ectropion and skin defect at the right lower lid (Figure 5). The external ocular surface remained intact. The patient was advised ectropion surgery and reconstruction of lid defect at a later date.

Lupus vulgaris is a form of cutaneous tuberculosis that usually infects the skin of a person who had been previously infected by Mycobacterium tuberculosis elsewhere in the body. It is generally considered to be a benign, slowly progressive skin lesion. It usually spreads from an endogenous source of tuberculosis through hematogenous, lymphatic, or contiguous extension. In some instances, it is acquired exogenously following direct 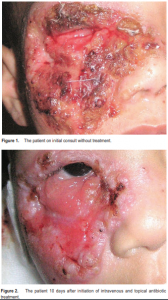 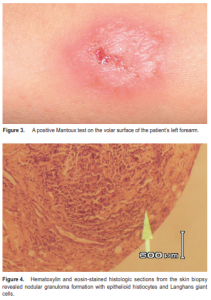 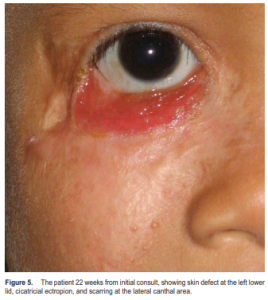 inoculation of the mycobacteria into the skin or bacilli calmette-Guerin (BCG) vaccination.2, 3 It is more predominant in females than in males at 2-3:1 ratio, and more common in children. In 80 to 90% of cases, the lesion appears on the hea and neck, particularly around the nose and earlobes.3 Involvement of the lower extremities, buttocks, and trunk is common in the tropics and subtropics. Rarely, the eyelid and genitalia can be affected. It typically starts as a small nodular TB deposit under the epithelium of the skin, pushing its way to the surface to appear as a translucent mass of variable size, with surrounding erythema. As it slowly increases in size and becomes more protuberant, nodules increase in number, spreading by peripheral deposition. The spread is very slow, but eventually a lupus patch is formed. Its irregular periphery shows actively spreading changes, while the center shows retrogressive changes of cicatrization or ulceration, which in either case leaves a scar. The lesion has a tendency to spread. There may be involvement of the nasal, buccal, and conjunctival mucosa primarily or by extension. Conjunctival involvement can present as hypertrophic papillar y conjunctivitis, ulceration, or tumor formation. Extension to the anterior ocular surface can cause irreversible visual damage.1 Destruction of cartilage within the affected area may also be seen, but bone is usually spared. Clinical diagnosis of lupus vulgaris is difficult to make since it presents in various forms and mimics other disease entities. It can present in plaque, hypertrophic, ulcerative, and vegetative forms.1, 2 It typically manifests in its plaque form, characterized by discrete, reddish to brown papules of gelatinous consistency (“apple jelly” nodules), which evolve slowly by peripheral extension and central atrophy and scarring into large plaques. Its active edge may be thickened and keratotic. The hypertrophic form shows soft tumor nodules, is deeply infiltrating, but relatively leaves no ulceration and scarring. In the ulcerative form, there is crust formation over necrotic and friable tissue. Involvement of deep tissues and underlying cartilage can lead to contracture and deformity. The vegetative form is characterized by marked necrosis and ulceration, proliferative and papillomatous granulation tissue, and minimal scarring. Complications of lupus vulgaris are secondary bacterial infection, deformity and mutilation, contractures, and malignant degeneration.2 In this case, the skin lesion was limited to the eyelid, malar, and nasal areas with no involvement of the ocular surface or underlying nasal cartilage. It presented as the ulcerating and necrotizing form of lupus vulgaris, complicated by secondary streptococcal and staphylococcal infection. Differential diagnoses included atypical mycobacterial infection, necrotizing fasciitis, ecthyma gangrenosum, pyoderma gangrenosum, and cryptococcosis, all of which can present as ulcerative lesions. Ideally, the diagnosis of lupus vulgaris is based on positive findings in chest radiograph, Mantoux test, incisional biopsy, AFB culture, and polymerase chain reaction (PCR). However, culture for bacilli may not always yield positive results. Several reports showed that only 6% of cutaneous cultures from patients with lupus vulgaris were positive.3 Furthermore, demonstration of AFB may be difficult especially in chronic lesions and with a high degree of immunity against infection. PCR provides rapid, specific and sensitive testing for Mycobacterium tuberculosis; however, its high cost and need of expertise limits its routine use. Because of this, the diagnosis is mainly based on the Mantoux test, histopathologic picture, and response to chemotherapy.4, 5 In the present case, AFB was demonstrated in the skin biopsy, but culture for AFB yielded negative results. Mantoux test was positive. The histopathologic studies showed chronic granulomatous inflammation with epithelioid cells and multinucleated giant cells. Marked improvement in the skin lesion was also noted after initiation of triple antituberculous therapy. Treatment of lupus vulgaris is based on the multidrug regimen recommended for systemic tuberculosis because of the strong association of cutaneous tuberculosis with simultaneous visceral involvement. Response to treatment can be used as a basis for diagnosis. Awareness of the possibility of lupus vulgaris, with its various clinical manifestations in cases of chronic, progressively enlarging skin lesions is very important. Early and correct diagnosis and prompt and adequate treatment, can prevent extensive and irreparable damage to involved structures.