Keratoconus, a progressive corneal ectatic disorder, usually begins at puberty and stabilizes during the third to fourth decade of life.1 It presents clinically as progressive thinning of the corneal stroma producing a conical shape more pronounced at the central, paracentral, or inferotemporal portion of the cornea.1 The Collaborative Longitudinal Evaluation of Keratoconus study reported an increase of 1.6 diopter (D) over the flat meridian in 8 years. In the same time period, 24% of patients had at least 3.0 D increase in the steep meridian. Throughout the disease course, almost 20% of patients required keratoplasty.2

Treatment of keratoconus focuses on alleviating the visual impairment resulting from corneal thinning.3 Early in the disease process, contact lenses are the mainstay of therapy and treatment-of-choice over spectacles because they correct the irregular astigmatism induced by the cone-shaped cornea.3 However, more advanced disease necessitates surgical intervention which may include implantation of intrastromal corneal ring segments (ICRS), penetrating keratoplasty (PKP), and deep anterior lamellar keratoplasty (DALK).3 Keratoplasty only improves vision in keratoconus but does not treat the underlying cause. It is only by collagen cross-linking that progression of the disease can be halted.3

This study was approved by the Institutional Scientific Review Committee. This was a descriptive, retrospective review of medical records of patients with keratoconus who underwent collagen cross-linking at St. Luke’s Medical Center – Quezon City and St. Luke’s Medical Center – Global City from January 2012 to March 2016. Demographic data, baseline and post-operative values of maximum keratometric value, BCVA, corneal astigmatism, and anterior and posterior elevation map changes were collected, analyzed, and compared.

Patients with pre-operative corneal topography consistent with keratoconus, clear corneas, keratometric value ≤60 D, and thinnest corneal thickness of at least 350 μm were included in the study. Patients included in the study also needed to have discontinued contact lens use before cross-linking and they must have undergone collagen cross-linking for keratoconus following the Dresden protocol with at least 2 years post-operative follow-up.

The treatment procedure following Dresden protocol was conducted under sterile conditions.5 Local anesthesia was applied using proparacaine 0.5% (Alcaine®, Alcon, Belgium). Using a blunt knife, the central 7 to 9 mm of the corneal epithelium was removed. One drop of riboflavin 0.1% solution (Peschke® D, PESCHKE Trade, Switzerland) was applied to the eye every 5 minutes for 30 minutes. After this time, fluorescence was observed in the anterior chamber using slit-lamp examination. The stromal thickness at the thinnest point was then assessed by ultrasonic pachymetry. If it was at least 400 microns, UVA irradiation using the PESCHKE Trade CCL – Vario Cross-Linking (PESCHKE Trade, Switzerland) was commenced. If the stromal thickness at the thinnest point was less than 400 microns, 0.1% riboflavin and 0.9% Sodium Chloride (Euro Med, Philippines) drops were instilled every 2 minutes for 10 minutes to increase corneal thickness to greater than 400 microns before irradiation with UV light. UVA irradiation was done using two UV diodes (370 nm) with a potentiometer in series to regulate the voltage. Three 1.3-V accumulators were used as a power generator. Before each treatment, the desired irradiance of 3 mW/cm2 was controlled with a UVA meter at a 1-cm distance. The patient’s cornea was then irradiated with the UVA-light diodes at a 1-cm distance for 30 minutes using 3 mW/cm2 irradiance, which corresponds to a dose of 5.4 J/cm2. After the treatment, antibiotic and steroid drops were applied, and a bandage contact lens was fitted and kept in place until re-epithelialization occurred usually during the third to fifth day. 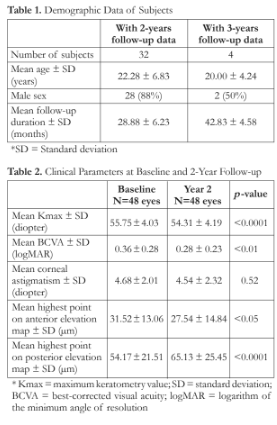 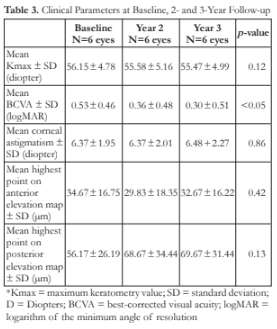 Analyzing the anterior surface of the cornea, there was a significant decrease between baseline and 2-year follow-up measurements (from 31.52 ± 13.06 to 27.54 ± 14.84 μm, p <0.05) (Table 2). In contrast, the posterior surface of the cornea demonstrated a significant increase of the back elevation from the baseline to 2-year follow-up (from 54.17 ± 21.51 to 65.13 ± 25.45 μm, p<0.0001). However, when only eyes with 3-year follow-up data was analyzed, there were no statistically significant changes observed for the anterior and posterior elevation maps when the baseline, 2nd and 3rd year data were compared (Table 3).

Our study showed significant flattening of the corneal curvature (Kmax) in eyes with keratoconus 2 years after cross-linking. This result is in agreement with several published studies.7-9

BCVA was also found to have significantly improved from baseline until the 3rd year post-cross-linking. This is again in line with the results from previous studies done.8,9 The improvement in visual acuity can be attributed to the significant corneal flattening, which would theoretically lead to a reduction in myopia and enable better contact lens fitting.

The Global Consensus on Keratoconus and Ectatic Diseases defined ectasia progression as a consistent change in at least 2 of the following parameters wherein the magnitude of the change is above the normal noise of the testing system: 1) progressive steepening of the anterior corneal surface; 2) progressive steepening of the posterior corneal surface, and 3) progressive thinning and/or increase in the rate of corneal thickness change from the periphery to the thinnest point. Our study findings demonstrated one of the criteria defining ectasia progression. However, this increase in posterior elevation may actually be due to a known decrease in the corneal thickness post – cross-linking.14 A previous study by Koller et al. in 2009 demonstrated no significant change in the posterior peak elevation post – cross-linking. While a study by Kranitz et al. in 2012 showed a significant decrease in the posterior elevation. These differences may be due to deductions in the back surface parameters being not as reliable as anterior surface parameters after corneal collagen cross-linking.14

Limitations of this study include the retrospective study design making it prone to selection bias. The low sample size obtained for those with 3-year follow–up is another limitation. It is likely due to this very low sample size that corneal curvature, corneal astigmatism, and anterior and posterior elevation map changes were found to have no significant difference when comparisons between baseline and 3-year follow-up data were made.