Local Validation of WINROP, an Online Screening Tool for Retinopathy of Prematurity

Retinopathy of prematurity (ROP) remains to be a common cause of preventable blindness in children all over the world.1 Sight-threatening disease develops in approximately 10-15% of babies with ROP. Early detection of preterm infants at risk for ROP through timely screening cannot be overemphasized.

While prematurity and low birth weight are widely-accepted risk factors for developing ROP, poor postnatal weight gain has been implicated in the development and progression of ROP. An online monitoring tool, WINROP (Weight, Insulin-like growth factor, Neonatal ROP) was recently developed to identify infants at high-risk for developing ROP based on weekly postnatal weight measurements. The web-based software calculates a preterm infant’s risk for developing any-stage or sight-threatening ROP based on his/her actual weekly weight gain. When the calculated risk exceeds the high-risk level, an alarm is triggered by the software.

Initial studies have reported varying sensitivity rates of the WINROP tool in detecting high-risk ROP infants, ranging from 50% to 100%. Given the wide variances in study results, it is important to conduct a local validation of the WINROP online tool. The objective of this study is to validate the WINROP online tool in predicting the development of any-stage ROP and treatment-requiring ROP among Filipino preterm infants in a single institution.

Medical records of preterm infants admitted at the neonatal intensive care unit (ICU) of the East Avenue Medical Center, who underwent ROP screening, from January 2013 to April 2017 were reviewed. Patient confidentiality was strictly maintained in the course of the study with adherence to the standards set forth by the Declaration of Helsinki and ICH-GCP. Charts of preterm infants born with gestational age of 32 weeks or less and who were admitted at the neonatal ICU for at least 2 weeks were included. Charts that were incomplete or belonging to infants who died during the course of ROP screening or who did not complete the ROP screening due to other reasons, or who had non-physiologic weight gain (i.e. hydrocephalus) were excluded.

Screening, diagnosis, and treatment of ROP were performed by a pediatric ophthalmology fellow; Ophthalmologyfindings and diagnoses were confirmed by a pediatric ophthalmology consultant. ROP classification was based on the International Committee on the Classification of Acute ROP. Treatment was carried out based on the criteria of the Early Treatment for Retinopathy of Prematurity (ETROP) study which included zone I, any stage ROP with plus disease; zone I, stage 3 ROP without plus disease; zone II, stage 2 or 3 with plus disease; and aggressive posterior ROP. Weights obtained from the charts were measured using a digital scale.

Anonymized data such as sex, gestational age at birth, birth weight, weekly weight, most severe ROP stage in the worse eye, and treatment type, if done, were collected and entered on the free online screening tool WINROP. Weekly weights were entered in the online tool until 36 weeks gestational age, as recommended by the WINROP study.

WINROP results were then compared with the actual ROP diagnoses derived from the medical chart. The sensitivity and specificity rates of WINROP to detect ROP were calculated. In addition, the positive predictive values (PPV) and negative predictive values (NPV) were also calculated. Stata v13 were used in data processing and statistical analysis. A P-value less than 0.05 was considered significant.

Agreement Between WINROP Results and Chart Diagnosis
The agreement between WINROP results and actual chart diagnosis is plotted in Table 2. WINROP flagged 77 preterm infants (55.8%). Of the 77 infants who were tagged high-risk for ROP, 50 had ROP. 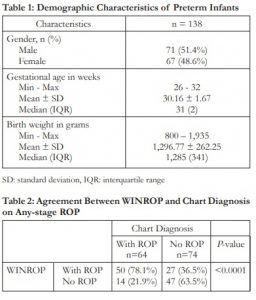 Table 2: Agreement Between WINROP and Chart Diagnosis on Any-stage ROP

The sensitivity and specificity rates of WINROP to detect any-stage ROP is also plotted in Table 3. Out of the 64 infants who had a chart diagnosis of ROP, 50 were flagged correctly by WINROP to be high-risk for ROP. Sensitivity of WINROP tool in detection of ROP was 78.1%. Of the 74 infants who did not develop ROP, 47 were not flagged by WINROP. Calculated specificity is 63.5%.

Table 4: Agreement Between WINROP and Chart Diagnosis on Treatment-requiring ROP 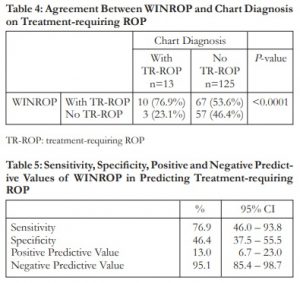 DISCUSSION
In this study, the online ROP surveillance system, WINROP, had fair sensitivity and specificity (78.1 and 63.5%, respectively) in predicting any-stage ROP among preterm infants from a single institution. Additionally, the sensitivity and specificity rates in detecting treatment-requiring ROP were 76.9% and 46.4%, respectively. These numbers are lower compared to previous studies done in other countries.4,7-9 Discrepancies in the results may be due to the presence of other postnatal factors in this cohort of premature infants. WINROP only takes into account postnatal weight gain when in fact ROP development and progression is multifactorial. Other postnatal factors including sepsis, respiratory distress syndrome, hyperbilirubinemia may contribute to development and progression of ROP.

WINROP is a free, online tool. However, the poor to fair sensitivity and specificity rates from this study limit its application in the local setting. WINROP may aid ROP prediction, but regular screening of preterm infants at risk for ROP based on current criteria remains to be the standard of care.