IDIOPATHIC retinal vasculitis, aneurysms, and neuroretinitis (IRVAN) syndrome is diagnosed after normal systemic work-up and lack of treatment response to immunosupressants. A 35-year-old Caucasian was referred by his optician for evaluation of posterior uveitis. The patient experienced “cloudy” vision in his right eye for a few years, not severe enough to seek consultation. Otherwise, he was healthy. Systemic evaluation revealed no history of bowel, respiratory, or skin disorders. He had not travelled recently to the tropics, did not smoke, and had no family history of eye or systemic disease. On examination, best-corrected visual acuity was 6/6 OU (OD: -1.25/+2.25 x 85; OS: –4.75/+0.50 x 80). Pupillary reactions, intraocular pressure (IOP), and color vision were normal in the right eye. Anterior-segment examination of the left eye revealed mid-peripheral iris transillumination defects, Krukenberg spindle, darkly pigmented trabecular meshwork, and IOP of 24 mm Hg. These findings were consistent with pigment-dispersion syndrome. Examination of the right eye also revealed some fine dusting of keratic precipitates. There were 1+ cells in the anterior chamber and anterior vitreous. A mild posterior subcapsular cataract was present. The vitreous was syneretic and peripherally there were preretinal vitreous opacities. Multiple aneurysmal dilatation of the arterioles and hard exudates associated with areas of capillary nonperfusion were noted at the peripheral retina. Fluorescein angiogram (FA) confirmed areas of capillary nonperfusion and aneurysmal dilatation of the arterioles (Figure 1). 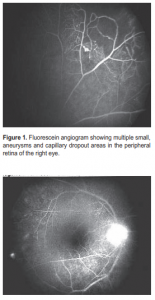 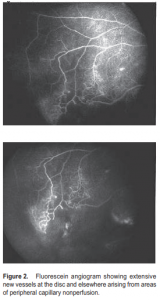 There was late disc staining, suggestive of neuroretinitis, with leakage from new vessels at the disc. Extensive uveitis work-up, including ESR, C-reactive protein, antinuclear antibodies, rheumatoid factor, anticardiolipin antibodies, C3, C4, Bartonella antibodies, angiotensin converting enzyme level, fluorescent treponemal antibody absorption test, purified protein derivative (Mantoux) and chest X-ray were all within normal limits. A diagnosis of unilateral idiopathic retinal vasculitis was made. No treatment was initiated as the patient’s visual acuity was unaffected. Three months later, some hard exudates and aneurysms were seen near the right macula with still stable visual acuity. A posterior subtenon injection of triamcinolone was performed with no significant improvement after a month. A trial of oral prednisone 80 mg and cyclosporin A 200 mg BID was started. Visual acuity remained good (6/6) in both eyes with no significant fundus changes on subsequent visits. Focal laser to the right macula was done at eighth month of follow-up. Side effects of oral steroid were present such as weight gain and Cushingnoid facies. Oral prednisone was gradually reduced and discontinued. At the last follow-up the patient was gradually being weaned off cyclosporin A. Repeat FA showed increasing peripheral neovascularization (Figure 2).

Panretinal photocoagulation (PRP) was not performed. The unilateral presentation, fundus appearance, age group, negative extensive work-up, and failure to respond to aggressive steroid therapy combined with immunomodifying drugs supported the diagnosis of IRVAN syndrome. At 18 months of follow-up, the fundus appearance remained stable and visual acuity was 6/6. The patient was on regular followup for possible sight-threatening complications such as exudative maculopathy and vitreous hemorrhage. IRVAN syndrome is a term coined by Chang and coworkers 10 years ago. 1 They described 10 patients with the same clinical features—idiopathic retinal vasculitis, multiple macroaneurysms, neuroretinitis, and peripheral capillary nonperfusion—and followed them up for an average of Figure 1. Fluorescein angiogram showing multiple small, aneurysms and capillary dropout areas in the peripheral retina of the right eye. four years. All had a negative extensive work-up and were nonresponsive to oral steroids. All in all, 18 cases have been published in the literature, describing a similar constellation of findings with variations. 2-6 More females were af fected and the patients were typically young. Some case reports have described spontaneous regression of the microaneurysms. 5 Two cases reported the disappearance of the retinal aneur ysm after intervention with scattered retinal photocoagulation on the peripheral nonperfusion area. 7-8 In others where scattered retinal photocoagulation was not performed, some aneurysms enlarged,others became smaller, and new aneurysms appeared in others. 6 Our patient exhibited characteristic features of IRVAN during the three years of follow-up, with relatively stable visual acuity and nonprogressive fundus findings. The differential diagnoses included systemic causes of retinal vasculitis and neovascularization such as sarcoidosis, Behcet’s disease, sickle cell anemia, leukemias, systemic lupus erythematosus, and ocular conditions such as pars planitis, Eales disease, and adult Coats’ disease. The systemic conditions were ruled out by negative systemic findings. Pars planitis can exhibit retinal periphlebitis with exudates, but retinal hemorrhages, vascular alteration, and retinal neovascularization are absent. Eales disease affects the same age group and has retinal vasculitis and capillary nonperfusion, but macroaneurysms and neuroretinitis are not associated with this disorder. Furthermore, Eales disease is usually bilateral and responds to oral steroids. Adult Coats’ disease has neovascularization, macro-aneurysms, capillary dropout, and vascular sheathing usually in the fundus periphery. It is also unilateral. Exudation, however, is a prominent feature in Coats’ disease, while it is minimal in IRVAN. PRP was deferred in our patient despite the presence of peripheral and disc neovascularization and areas of capillary dropout, mainly because the new vessels were flat and did not cause a vitreous hemorrhage. There was also a significant risk of inducing cystoid macula edema after PRP in an otherwise good and stable vision. Graham and coworkers recommended that in the setting of retinal neovascularization associated with posterior uveitis, PRP should only be performed when the eye is quiet and only for patients with recurrent vitreous hemorrhage and significant capillary closure.

It has been reported that retinal lesions are generally unresponsive to oral steroids in most cases of IRVAN, 1, 6, 8 such as in this patient where systemic oral steroid had to be combined with immunomodulating agents. None of the reports in the literature mentioned the effect of immunomodulating agents on patients with IRVAN, though they did caution against injudicious use of steroids. 1 Sudden withdrawal of these drugs run the risk of rebound inflammation; hence, they have to be tapered over a period of time even in the absence of therapeutic effect. Patients with this condition need to be followed up closely as they may develop sight-threatening complications, such as exudative maculopathy and vitreous hemorrhage. Both respond quite well to timely laser treatment. The possibility of spontaneous regression should always be borne in mind, as a more conservative approach that will preserve visual acuity is a reasonable management strategy.