Disclosure: The authors report no conflict of interest. No financial support was received for the study.

Increased IOP is a common manifestation of arteriovenous anomalies, such as carotid-cavernous fistulas (CCF), occurring in 60 to 70% of patients.1 The increase in IOP is usually due to the elevated venous pressure resulting from the mixing of arterial and venous pressures.2 Since the cause of IOP elevation is not inherent to the eye, medical therapy to lower the IOP is often inefficient, and IOP may remain elevated if the underlying pathology is not addressed. Patients who are unable to undergo early closure of the CCF are at risk for development of glaucoma, and eventually loss of vision.

CCFs are abnormal connections between the carotid artery (or its branches) and the cavernous sinus.3,4 It can be classified based on the fistula’s hemodynamic properties (high-flow or low-flow), etiology (spontaneous or traumatic), or anatomy (direct or indirect). Direct CCFs are direct shunts between the internal carotid artery (ICA) and the cavernous sinus while indirect CCFs are dural shunts or those that originate from carotid artery branch vessels. Direct or type A CCFs are most commonly caused by traumatic injury or an aneurysmal rupture. Indirect CCFs (types B to D) usually occur spontaneously and are often idiopathic; however, vascular diseases may contribute to causing microscopic breaks in dural vessels that may lead to fistula formation. The gold-standard imaging modality for diagnosing CCFs is cerebral angiography.4

The goal of treatment is complete occlusion of the fistula while maintaining normal blood flow through the ICA. Those with indirect CCF may try conservative management first through manual compression of the ipsilateral carotid artery that has been reported to cause spontaneous fistula closure.4 Direct CCFs rarely resolve spontaneously and usually require endovascular intervention involving embolization with thrombogenic agents, or placement of covered or flow-diverting stents. Eighty to ninety percent of patients who undergo endovascular treatment will experience a complete cure, with resolution of signs and symptoms upon obliteration of the fistula.4

At present, there is very limited local data regarding the occurrence of secondary glaucoma in patients with CCF. From 2000 to 2002, two cases with increased episcleral venous pressure (EVP) out of 836 glaucoma patients were seen at the Philippine General Hospital (PGH).5 From 2010 to 2014, there were 10 cases with elevated EVP out of 570 glaucoma patients seen in another tertiary hospital.6 Both studies did not specify the cause of the increased EVP.

In this study, we described the demographic and clinical profiles of patients with CCF, determined the prevalence of increased IOP, and evaluated the IOP outcomes of those who underwent endovascular treatment.

This was a single-center, descriptive study conducted through retrospective review of medical records of patients diagnosed with CCF at the Orbit Clinic of the PGH Department of Ophthalmology and Visual Sciences (DOVS) from January 2012 to December 2017. One hundred eighty-nine (189) charts were identified and crosschecked with records from the Glaucoma Clinic based on the inclusion and exclusion criteria. Only patients with radiologic evidence of CCF by 4-vessel cerebral angiography were included. Those with a diagnosis of CCF not confirmed by cerebral angiography, those with prior intervention for CCF, history of primary glaucoma, and incomplete medical records were excluded. The study was conducted in compliance with the Declaration of Helsinki and reviewed and approved by the University of the Philippines Manila Ethics Review Board. Identities were anonymized and kept confidential.

Collected information included patient demographics, ophthalmologic examination findings including optic nerve head evaluation and gonioscopy, and radiologic findings. The lowest and the highest IOPs were recorded. The primary outcome measures of the study were the following: (1) prevalence of increased IOP in patients with CCF; (2) mean and range of IOPs; (3) average number of IOP-lowering medications needed; and (4) percentage of eyes with normal, controlled, or uncontrolled IOP before and after endovascular intervention. In this study, eyes with IOP ≤ 21 mmHg without IOP- lowering medications were identified as normal. Controlled IOP was defined as IOP ≤ 21 mmHg with medications, while uncontrolled IOP was defined as IOP > 21 mmHg with or without medications.

From January 2012 to December 2017, there were 189 patients diagnosed with CCF; 104 were confirmed by cerebral angiography and only 92 were included in the study. Ninety-seven (97) charts were excluded due to the following reasons: absence of confirmatory angiography (n=79), negative for CCF on angiography (n=5), had prior embolization of CCF on initial consult (n=6), history of primary glaucoma (n=1), and incomplete data (n=60). Of the 92 with angiographically-confirmed CCF, 4 had bilateral CCF; hence, a total of 96 eyes were included.

The mean age of patients was 37.8 ± 15.2 years (range, 16 – 85 years); 59% were between the ages of 20 to 39 years. Majority (n=60) were males. Direct type of CCF accounted for 70%; most had a history of head trauma (Table 1). The most common type of indirect CCF was Barrow Type D (26%); most had vascular co-morbidities, commonly hypertension. The baseline characteristics of the patients distributed according to the type of CCF are shown in Table 1. 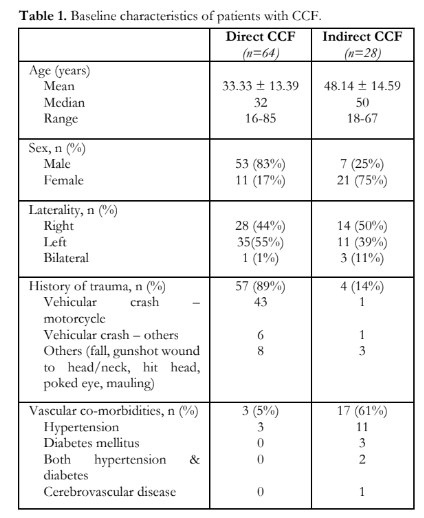 The clinical presentation of CCF is shown in Table 2. Increased IOP was the third most common eye sign and observed in 75 eyes with a prevalence of 78%. 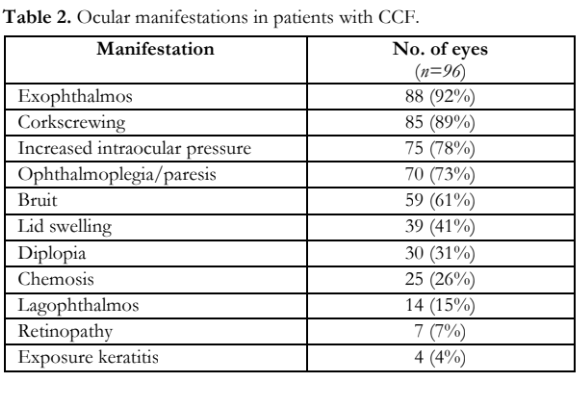 Seventy-four (74) eyes had 360O open angles, with visible blood in Schlemm’s canal in 37% and one with angle neovascularization. One eye had 360O occludable angles that opened to ciliary body band after laser iridotomy.

The mean IOP was 20.3 ± 8.0 mmHg (range, 10 – 56); 26% had normal and 36.5% had controlled IOPs, while 37.5% remained uncontrolled despite medical treatment. The mean number of antiglaucoma medications was 1.2, and the average number needed to achieve IOP control was 2. Among the 67 patients on antiglaucoma medications, b-adrenergic blocker was the most commonly prescribed (93%) antiglaucoma drug used either individually or in combination with other drops.

In older studies, 70-90% of CCFs reported were the direct type,4,7,8,9 which was also seen in this study as the predominant one (70%) largely caused by trauma particularly from a vehicular crash involving motorcycles. Those involved were mostly young males while cases of indirect CCF were mostly older females with vascular co-morbidities. Our findings are similar to those reported in literature8-9.

Several studies on angiographically-confirmed CCF reported the occurrence of elevated IOPs (Table 4) ranging from 32 to 72% and most were of the indirect type.8,10-15 This study, predominantly direct, had increased IOP at 78%. 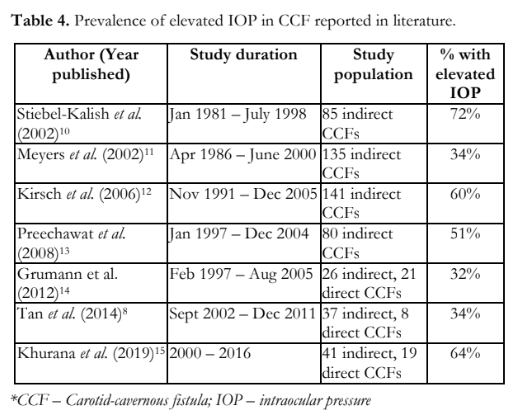 Stiebel-Kalish et al. showed that 13% of their patients had glaucomatous cupping and visual field loss, similar to this study of 14% found in eyes with uncontrolled IOPs.10 Hence, glaucomatous optic neuropathy can be a sequela of CCF presenting with elevated IOP that remains uncontrolled.

The mechanism of glaucoma in CCFs can be open-angle or angle-closure. The abnormal vascular connection causes an increase in episcleral venous pressure, leading to elevation of IOP.2,16,17 Prolonged IOP elevation may further damage the trabecular meshwork and decrease outflow facility.18 This open-angle mechanism is more widely known for causing glaucoma in CCFs, and it accounted for 98% of cases in this study.

The angle-closure mechanism has been documented in several case reports.19,20 Arterialization of the orbital venous drainage system causes an increased pressure in the vortex veins, which may lead to congestion of the ciliary body and choroidal transudation with subsequent detachment, that in turn causes anterior displacement of the lens-iris diaphragm and shallowing the anterior chamber.17-21 This study found only one patient with closed angles, which opened to ciliary body band 360o after laser iridotomy. The angle closure in this case was most likely not secondary to the CCF.

The occurrence of neovascular glaucoma (NVG) has also been reported in literature. Some patients develop NVG during the course of their disease, and some even after embolization.17,23,24 The hemodynamic changes in CCF cause a decrease in arterial flow to the orbit, resulting in decreased ocular perfusion and ischemia that may lead to neovascularization in the anterior segment.17,18,25 NVG may also develop as a result of patients’ pre-existing conditions. Patients with indirect CCF commonly have vascular co-morbidities such as hypertension, atherosclerotic disease, or diabetes, which are risk factors for retinal vaso-occlusive diseases and diabetic retinopathy, and, if left untreated, subsequent NVG. In this study, one eye that already had elevated IOP on initial consult, was noted to have further increase in IOP despite medications. A repeat gonioscopy on follow-up revealed angle neovascularization with open angles, which were absent on initial gonioscopy. This patient had long-standing hypertension, indirect CCF, and dilated and tortuous retinal veins.

Seventy-eight percent (78%) of eyes had elevated IOP. Most patients would have elevated IOP at some point in their disease despite presenting initially with normal pressures. Most would eventually be controlled with or without medications. It is hypothesized that the improvement was due to better adherence or response to medications, and/or partial thrombosis of the CCF.26 Closure of the fistula has been reported to occur spontaneously or following manual carotid compression, but this is mostly observed in indirect CCFs and rarely in the direct type. Higashida et al. noted progressive fistula closure following intermittent external manual carotid compression in 30% of indirect and 17% of direct CCFs, and Kai et al. showed that 35% with indirect CCFs achieved clinical cure or improvement after manual carotid compression.27,28 A follow-up angiography would be needed to confirm the occurrence of thrombosis.

Elevated IOP in patients with CCF can be conservatively managed with topical and oral IOP-lowering agents although it can be ineffective in some patients because the pathology is external to the eye. Aqueous suppressants are more effective than drugs that improve trabecular outflow.16,29 In this study, b-adrenergic blockers remained the first-line drug given in those with elevated IOP, but 30% required more than one class of drug for IOP control.

If IOP remains elevated despite maximum medical therapy, definitive treatment of the CCF should be done instead of glaucoma surgery.30 Filtering surgery should only be considered if IOP remains high after CCF closure or if CCF treatment cannot be performed or has failed. Trabeculectomy may be effective in bringing down IOP, but intraoperative complications have been reported in patients with increased episcleral venous pressure. Bellows et al. reported rapid intraoperative choroidal effusion in 4 patients, and in another study choroidal effusion still occurred in spite of a prophylactic partial thickness sclerotomy that was eventually deepened to drain the fluid.31,32 In eyes considered high risk for intraoperative complications or with poor visual potential, transscleral diode cyclophotocoagulation (CPC) may be performed.29 In this study, no eyes underwent incisional surgery, and one eye with poor vision and high IOP of 40s that was poorly responsive to medications underwent diode CPC. Post-laser, the IOP was controlled with two medications. Diode laser CPC can be used as a temporizing measure in those with uncontrolled IOPs before definitive treatment could be done.

One of the main indications for definitive treatment of CCF includes refractory glaucoma.4,7,12,13 Out of the 13 eyes from the 11 patients in our study who underwent definitive management, 5 had uncontrolled IOPs and 2 of those had glaucomatous optic neuropathy. All 13 eyes were receiving IOP-lowering medications prior to endovascular intervention. Preechawat et al. reported 72% (55 cases) of indirect CCF had IOP within the normal range after fistula closure while the rest needed antiglaucoma medications to control the IOPs.13 This study showed a lower success rate (33%) in controlling the IOPs after endovascular intervention. Ocular manifestations usually resolve within hours or days after successful endovascular treatment with complete closure of the fistula.4 The present study showed that some patients still required IOP-lowering medications or had uncontrolled IOP months following the definitive treatment. Possible reasons for the sustained IOP elevation included the following: (1) a different mechanism of glaucoma may co-exist; (2) failure of fistula closure; or (3) recurrence of the CCF from recanalization. This highlights the importance of repeat examinations, such as gonioscopy and indirect ophthalmoscopy, especially when IOPs remain high despite resolution of other signs and symptoms after definitive treatment.

In summary, there is a high prevalence of increased IOP in patients with CCF. Majority of cases eventually achieve IOP control with or without antiglaucoma medications throughout their disease; those who do not should be referred for immediate endovascular intervention to prevent more serious complications. Patients who undergo definitive treatment should be continuously monitored for improvement or worsening of eye findings.