FROSTED-branch angiitis (FBA) is a rare form of retinal vasculitis characterized by decreased visual acuity, white perivascular sheathing of the retinal blood vessels, anterior-chamber cells, absence of systemic involvement, and response to steroid treatment. 1-10 Central-retinal-vein occlusion (CRVO) may develop in some patients with FBA. 11 We describe here the fluorescein (FA) and indocyanine-green (ICG) angiographic and opticalcoherence-tomographic (OCT) findings in a patient with FBA and CRVO. A healthy, 34-year-old Japanese female experienced rapidly progressive blurring of vision in the left eye. On presentation, the best-corrected visual acuity was 20/400. There were 2+ cells in the anterior chamber. Dilatedfundus examination revealed extensive white perivascular sheathing of engorged, tortuous retinal veins. Macular and papillary edema were present. FA demonstrated diffuse dye leakage from the retinal veins, optic-nerve head, and macula. Areas of ischemia and intraretinal hemorrhages appeared as hypofluorescent patches (Figure 1A-B). The right eye was completely normal. ICG revealed beading of the retinal veins, intravascularfilling defects, and diffuse posterior-pole hyperfluorescence which obscured visualization of the choroidal blood vessels. Foci of intense intravascular hyperfluorescence suggestive of focal intravascular inflammation and foci of intravascular hypofluorescence suggestive of vascular occlusion were visible both in the retinal arteries and veins. Late-phase patches of choroidal hypofluorescence were observed suggesting involvement of the choriocapillaris or larger choroidal blood vessels (Figure 1C). The patient was diagnosed to have FBA with CRVO and was treated with a periocular injection of triamcinolone acetonide (40 mg), prednisolone acetate eye drops, and oral prednisone (1 mg/kg/day). Over the next 3 months, the visual acuity returned to 20/50. The fundus improved in appearance with reduction of cotton-wool spots and foveal hard exudates. Multiple retinal arterial plaques were visible. FA demonstrated return of retinal veins to a nearnormal appearance with residual patches of ischemia and late disc hyper fluorescence. ICG demonstrated disappearance of retinal blood vessels abnormalities but persistence of late-phase choroidal hypofluorescence (Figure 2). Optical coherence tomography (Stratus OCT, Carl Zeiss Meditec, Dublin, CA) performed after 2 weeks of steroid therapy revealed optic-nerve-head (ONH) swelling with reduction of the optic-cup area (0.072 mm2 compared to 0.435 mm2 for the uninvolved eye). The nerve-fiber layer was thickened (114.9 µm compared to 87.1 µm for the uninvolved eye). OCT of the macula showed normal retinal configuration and thickness (217 µm) (Figure 3). 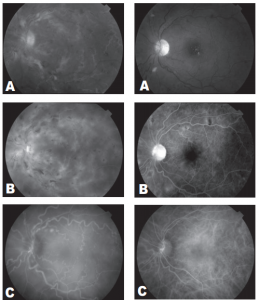 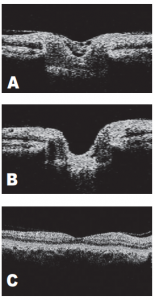 FBA is a clinically distinct form of retinal vasculitis. Since its initial description by Ito in 1976, several reports of FBA have been published; however, the underlying pathophysiologic processes are still poorly understood. While most cases are idiopathic in nature, some cases have been associated with hematologic malignancies, viral infections, and autoimmune disease. 1-12 It is unclear whether FBA is a unique disease entity or a common presentation resulting from several causes. 12 In this patient, no systemic associations were found and no etiologic cause was established. Masuda and coworkers found areas of choroidal hypofluorescence during ICG angiography in a case of FBA without CRVO. They surmised that areas of choroidal hypofluorescence are suggestive of choroidal vascular occlusion or choroiditis. 10 In our patient, the retinal blood vessels exhibited three types of findings during FA and ICG angiography: 1. foci of intravascular hypofluorescence indicating an occlusive process, 2. foci of intense hyper fluorescence suggesting multifocal inflammatory processes, and 3. segments with mild dye leakage indicating diffuse vascular leakage and blood-retinal-barrier disruption. The involvement of both retinal and choroidal blood vessels suggests that a common vascular antigen acts as the inciting agent for FBA. The most prominent OCT finding was ONH swelling similar to that found in central-vein occlusion. There was also mild thickening of the sensory-retina and nerve-fiber layers. We are not able to determine whether CRVO in conjunction with FBA stems from occlusive vasculitis causing thrombosis or optic neuritis causing luminal occlusion. Retinal OCT did not demonstrate cystic changes or retinal thickening and was not helpful in establishing nor monitoring the disease. Kaburaki and associates reported two cases of FBA associated with CRVO. 11 Both patients developed neovascular glaucoma (NVG) and progressive worsening of vision despite initial improvement with systemic steroids; CRVO and NVG developed when the steroid dosage was tapered. In contrast, the initial presentation of our patient was FBA with CRVO. Prolonged high-dose oral-steroid intake given over 3 months resulted in steady improvement of visual acuity and angiographic appearance. This case suggests that prolonged steroid intake may be necessary in order to prevent progression of a vascular occlusive process. The good response to steroid treatment with return to normal angiographic appearance of the retinal and choroidal blood vessels also suggests that the occlusive process is primarily inflammator y in nature and is reversible. While care should be taken prior to instituting steroid treatment particularly in the background of an immunocompromised status, caution should likewise be exercised when reducing steroid dosage especially when there is an initial good response to steroid intake. This case report reveals that CRVO may be an initial presentation of FBA and that early, vigorous steroid treatment may be beneficial for these patients. FA, ICG, and nerve-fiber-layer OCT examinations were useful in monitoring disease resolution. Early and aggressive steroid treatment was beneficial in controlling inflammation and improving visual outcome.