THERE is a growing interest in the use of porous orbital implants following enucleation. These implants permit fibrovascular ingrowth from the surrounding tissues with biologic anchoring and vascular access. Theoretically, these minimize the incidence of migration and extrusion seen in nonporous orbital implants.
1 Two commercially available porous implants are coralline hydroxyapatite and porous polyethylene. Hydroxyapatite is a complex calcium phosphate salt occurring naturally in the body. It is the primar y mineral in the human bone. Porous hydroxyapatite is made from a specific genus of reef-building coral.
2 Animal studies have shown that when implanted into a soft tissue area, this material becomes invested with the animal’s tissue without forming a pseudocapsule around it. It tends to be covered by the surrounding fibrovascular tissue and epithelium.
3 Other studies, however, have shown that the implant is brittle and may require a wrapping of sclera or other material to reduce the incidence of exposure.
4 Porous polyethylene (Medpor, Porex Surgical, Atlanta, GA, USA) is a polymer composed of simple hydrocarbon chains highly resistant to biological degradation. Its pore size ranges from 100 to 200mm. Porous polyethylene is not brittle and produces less tissue friction during implantation. Extraocular muscles may be sutured directly to the implant surface.
4 It is well tolerated in enucleated patients and is associated with low risk of exposure or extrusion.
5 Cadaver bone, prepared by heating spheres of cancellous bone that destroys all organic matter and leaves only the calcium phosphate mineral framework, has been used since the 19th century. Long-term follow-up of hydroxyapatite implants prepared from fine-textured, three dimensional porous bovine cancellous bones, showed limited exposure that healed spontaneously with low incidence (7.5%) of explantation.
6 Human bone has been processed primarily for grafting. These bone grafts undergo degreasing to prevent tissue reaction in the host. Red marrow and other proteinaceous materials are removed to reduce their antigenicity. Nonviable foreign bone undergoes freeze-drying to remove moisture. This reduces antigenicity and makes it possible to store the bone at room temperature for a long period and to transport it easily.
7 Cortical and cancellous bones may be used as allografts. Cancellous bone is ideal as defect filler. Its porosity provides a scaffold for fibrovascular ingrowth. Taking these characteristics of freeze-dried human bone into consideration, this study determined whether freeze-dried human bone can be used as an orbital implant. Its biocompatibility, integration to host tissues, presence of fibrovascular ingrowth, and adverse effects were assessed.

METHODOLOGY
Ten (10) rabbits weighing between 2 and 3kgs each were placed under ketamine anesthesia (Ketaject 50 mg/kg, Astrapin/PharAsia-Curest) combined with lidocaine- (Abbot 2% Lidocaine, Abbot Laboratories, Abbott Park, IL, USA)) bupivacaine (Sensorcaise, AstraZeneca, London, Great Britain) local anesthesia. Unilateral enucleation was performed in each rabbit; the eye was randomly chosen. A 360O conjunctival peritomy was performed. Subtenon’s space was explored and the rectus muscles were isolated and severed from the globe. The optic nerve was cut and the globe was removed intact. The 14mm freeze-dried human cancellous bone implant was placed into the muscle cone. The Tenon’s capsule and conjunctiva were closed using interrupted 6-0 Vicryl (Alcon Laboratories, Fort Worth, TX, USA) suture. Tarsorrhaphy was performed at the close of the surgery using a single bite of Vicryl 6-0. Tobramycin ointment (Tobrex, Alcon Laboratories, Fort Worth, TX, USA) was instilled into the enucleated eye postoperatively. Each rabbit was observed daily for adverse reactions and signs of implant extrusion.
All rabbits were euthanized after six weeks, using an overdose of intramascular (IM) ketamine. The bone implants were explanted and immediately fixed with 10% buffered formalin solution. The specimens were placed in 5% nitric acid solution for decalcification. Microscopic sections were taken from the center of the orbital implant sphere in the sagittal plane. Sections were stained with hematoxylin and eosin and examined microscopically for evidence of tissue integration and inflammation. The extent of tissue integration was described as to its location— whether the fibrovascular tissue is within the outer, middle, or inner third of the implant. Treatment of the rabbits adhered to the guidelines of the Association for Research in Vision and Ophthalmology (ARVO).

Preparation of the orbital implant sphere 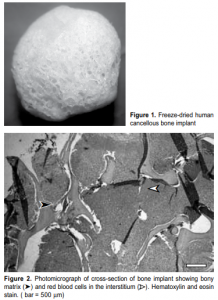 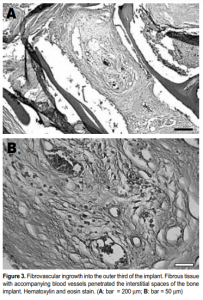 were processed in the hospital’s tissue bank. Cancellous bones derived from human femoral head were harvested from post-trauma patients of the Department of Orthopedics who had undergone hip arthroplasties. The cortex was removed and the cancellous part rinsed in warm water to remove surface grease. Spheres measuring 14mm were shaped using an electric saw. These were placed in a washing machine with cold water for approximately four hours to remove red marrow and other proteinaceous material. The completion of the washing period was signaled by the absence of red coloration from the bone. The bone spheres were placed for 24 hours in the freeze-drying apparatus with vacuum pressure of 30 millibars and temperature at –30°C. The freezedried bones were then placed in individual plastic packets and sterilized using ethylene oxide gas.

RESULTS
Among the 10 rabbits that underwent enucleation and implantation of the bone implant, six were able to complete the six-week obser vation period. One died immediately postoperatively, one expired within the first postoperative week, while the other two died two weeks after enucleation. There was no extrusion of the bone implant among the enucleated rabbits. But there was exposure of the anterior surface of the bone implant associated with minimal mucoid discharge. The exposed surface was eroded, with loss of the normal porous appearance. On explantation, there was no change in the size of the implants, no gross tissue infection or evidence of dystrophic calcification and heterotropic bone formation.

Histological examination of the implants revealed the presence of fibrovascular tissues in all (Figures 2 and 3). Growth of the fibrovascular tissue was confined mostly to the outer third of the implants; none was seen in the middle two-thirds. Two of the six implants were invested with a thin fibrous capsule (Figure 4). Minimal inflammatory cells were present. A few plasma cells were scattered in the center of the bone implants, mixed with numerous red blood cells (Figure 5). More plasma cells were observed in the bone implant margins. Granulomatous reaction was absent.

DISCUSSION
In the study by Goldberg et al., two out of 12 porous polyethylene implants (17%) and two out of four (50%) hydroxyapatite implants in rabbits extruded in the early postoperative course. 4 The absence of extrusion at the sixth-week follow-up in our study is favorable compared with the earlier study. The histological findings in the bone implants support previous reports that porous implants provide structure for fibrovascular tissue ingrowth, 3, 4, 8, 9 which minimizes the occurrence of extrusion. In our study all six specimens have fibrovascular tissue ingrowth and none of the implants extruded after six weeks. None of the implants, however, had complete fibrovascularization into the inner zone. Previous animal studies showed that porous hydroxyapatite implants had complete ingrowth at six weeks and that porous polyethylene had fibrovascularization into the outer third zone during the first six to eight weeks, followed by a slower rate of tissue growth into the middle zone by the 48th week. 4 In our study, it is possible that the tissue ingrowth was in the early stage at the sixth week and complete fibrovascularization would have occurred much later. Capsule formation in two implants indicated that the implants would be integrated well into the anophthalmic socket. Growth of the animal’s own tissue around the implant may indicate lesser chances of extrusion. The bone implants appeared to be well tolerated grossly and histologically. There were no evidence of gross tissue infection nor inflammation. Histologically, there was paucity of inflammatory cells. Plasma cells were found in the periphery and scattered among red blood cells in the center of the implant, an indication of chronic inflammator y reaction seen in fibrovascularization. Increased inflam-mation causes greater excitation of myofibroblasts, leading to increasing socket contraction and risk of extrusion. 4 The absence of extrusion in our study is a good indicator that the bone implants were well tolerated by the body. The absence of changes in the size of the bone implants after explantation is an indication that resorption of the implant did not take place. Suter et al. observed spontaneous breakdown of orbital implants involving bovine bone-derived hydroxyapatite orbital implants. Hydroxyapatite crystals contained in normal bones (along with collagen) were found to break down when exposed to conjunctival secretions. 6 This may explain why there was erosion of the exposed anterior surface of the bone implants in this study, which may be prevented by covering it with autologous sclera, as frequent rubbing of the rough bone spicules in the implant surface may result in thinning of the overlying conjunctiva. This study showed that spherical freeze-dried human cancellous bone is a viable material for orbital implants. It does not induce significant inflammation grossly and histologically. Its porosity encourages growth of fibrovascular tissue into the implant, ensuring good tissue integration and minimal implant extrusion. Capsule growth around some implants also ensures better soft tissue integration. Further studies should include implants wrapped in autologous sclera to determine whether they would prevent exposure and implant erosion. The time to explantation should be prolonged to observe whether complete fibrovascularization occurs and if bone resorption or implant extrusion would eventually occur. Human trials are needed to determine whether the material is tolerated by the human body.