CONGENITAL nasolacrimal-duct obstruction (CNLDO) is a common clinical problem affecting as much as 6% of all newborns. 1-2 The most common form is failure of the canalization of epithelial cells that form the nasolacrimal duct as it enters the valve of Hasner. There is a high spontaneous rate of remission (60 to 90%) in the first year of life; hence, nasolacrimal-duct (NLD) probing should be delayed until 12 months of age. 2 Parents can be instructed to perform lacrimal-sac massage during the intervening period until the tearing subsides. The first line of treatment in CNLDO is NLD probing with the objective perforating the persistent layer of epithelial cells near the valve of Hasner. Probing has a high success rate if done at the appropriate time. Its failure increases with age and is known to double every 6 months. Thus, in cases of persistent epiphora, a second probing 2 to 4 months later is recommended. In failed cases with persistent epiphora and recurrent infection, it may be necessary to perform a dacryocystorhinostomy. Alternatively, bicanalicular silicone intubation with Crawford, Juneman or Ritleng tubes may be carried out, with success rates ranging from 88 to 95%. 4 Its drawbacks include the relative complexity of the procedure, difficulty of fixation, damage to the canalicular system, inadvertent removal of the tubes by the child, and the need for anesthesia/sedation for the removal in some cases. 5 Balloon catheter dilatation (balloon dacryocystoplasty) was a method devised by Bruce Becker in 1991. 6-7 It consisted of a nasolacrimal probe combined with a balloon designed to forcibly expand the nasolacrimal duct, a strategy similar to coronary angioplasty. This procedure involved probing the nasolacrimal duct with a semiflexible-wire probe with an inflatable balloon at the tip (Figure 1). It has also been promoted as a less complex procedure compared with intubation because it does not require retrieval of the probe from the nose. We report two cases of CNLDO that underwent balloon dacryocystoplasty (DCP). 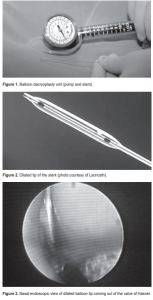 The first case involved a fiveyear-old boy with intermittent tearing of the right eye since birth. Dye-disappearance test revealed an obstruction in the right nasolacrimal duct. Matted lashes and a high-level tear meniscus were present in the right eye. No previous NLD probings nor intubation were done. Balloon DCP was subsequently performed. Postoperatively, the patient was given combination steroid/antibiotic eyedrops, nasal decongestant, nasal steroids, and oral antibiotics. After one week, the patient’s tearing subsided and at last followup at 14 months, he remained symptom-free. The second case was a six-year-old boy who had on and off tearing in both eyes since birth. NLD probing was performed for NLD obstruction on both eyes at 4 years of age. The tearing, however, persisted. A bilateral balloon DCP was performed. Postoperative medications included steroid antibiotic eye drops, nasal decongestants, and oral antibiotics. Tearing resolved after 1 week in the left eye and 2 weeks in the right eye with the addition of lacrimalsac massage. At last follow-up at 10 months, both eyes remained symptom-free. There are 2 sizes of balloon DCP tubes (Lacricath, Atrion Medical, Birmingham, AL, USA): 2 mm for children below 24 months and 3 mm (Figure 2) for children above 24 months. Both patients had general anesthesia during the procedure. Nasal packing soaked with oxymetazoline (Drixine) was placed inside the nose just below the inferior turbinate. The ipsilateral lower or upper punctum was dilated and a 0-Bowman probe was inserted until it reached the inferior meatus. After the removal of the Bowman probe, the deflated balloon stent was inserted until it reached the inferior meatus. The nasal pack was removed and a 2.7-mm (pediatric) video endoscope was placed intranasally to visualize the balloon stent coming out of the valve of Hasner (Figure 3). The balloon was inflated for 90 seconds and then deflated.

The deflated stent was retracted a few millimeters superiorly to the level of the lacrimal sac and duct. A marker on the stent indicated the level of the sac–duct junction. The balloon was again inflated for 90 seconds, deflated, and removed. NLD irrigation was done and endoscopically visualized nasally to confirm its patency at the valve of Hasner. Once the flow of fluid was confirmed, this indicated a patent nasolacrimal duct. Since Becker’s pioneering study, many ophthalmologists in the United States have been using balloon DCP for CNLDO. Becker has used this procedure on patients up to 6 years of age. 7 Our series of balloon DCPs reflects the results of the cases reported by Becker. Both were done in children more than 12 months old (five and six years) who were poor candidates for NLD probing. Despite their age, successful results were obtained with a long-term follow-up of more than 10 months. Compared to NLD probing, balloon DCP not only punctures the valve of Hasner but also dilates and expands the nasolacrimal duct. It is generally effective and safe in the treatment of CNLDO as a primary procedure in children over 12 months of age and as a secondary procedure after failure of NLD probing.