Efficacy of oral diclofenac as preemptive analgesic for pterygium surgery

POSTOPERATIVE pain is a concern of both patients and surgeons. It is generally managed by pain relievers given intra- or postoperatively. Pain in ocular surgery is the result of nociceptive injury to peripheral neural structures. The use of local anesthesia during ocular surgery is primarily aimed at controlling intraoperative pain. The concept of preemptive analgesia to reduce postoperative pain was founded on a series of successful animal experimental studies.
Preemptive analgesia stems from the importance of pain modulation through peripheral or central inhibition of nociception. It is the pharmacologic management producing effective analgesia prior to surgical trauma using central neural block, local anesthetic infiltration, opioids, nonsteroidal antiinflammatory drugs (NSAIDs), or ketamine. The use of preemptive analgesics in ocular surgery is not well established. Weinberger used topical sodium diclofenac as a preemptive analgesic for retinal laser photocoagulation.
Kristin showed that preoperative peribulbar bupivacaine effectively reduced postoperative pain for vitrectomy surgery. Fekrat demonstrated that intraoperative intravenous ketorolac tromethamine effectively controlled postoperative pain after vitreoretinal surgery. A metaanalysis by Ong (2005) on preemptive analgesia, covering the period January 1987 to October 2003, however, showed equivocal effectiveness among various forms of preemptive analgesics for a variety of surgical procedures. Pain is still a concern in intra- and postoperative periods in minor ocular surgeries, such as pterygium excision where topical and local anesthetics are used. This is usually addressed by giving analgesics after surgery. However, patients’ apprehension of pain and their actual pain perception may be markedly reduced if the pain reliever is given preoperatively. Diclofenac, a common pain reliever given postoperatively, is a nonselective cyclooxygenase inhibitor rapidly absorbed by the body following oral intake. It has a half-life of 1 to 2 hours, with an onset of action an hour after intake. Its duration of action lasts for approximately 12 hours and is, therefore, suitable for relieving postoperative pain.
This study determined the efficacy of oral diclofenac as a preemptive analgesic among patients undergoing pterygium excision. Intra- and postoperative-pain scores were determined including the need for supplemental analgesic within 24 hours after the procedure.

METHODOLOGY
We conducted a prospective, randomized, double-blind clinical trial involving patients from the outpatient clinics of the Department of Ophthalmology, East Avenue Medical Center. Patients were invited to participate in the study if they met the following inclusion criteria: at least 21 years old, diagnosed with pterygium at least >2 mm from the limbus, scheduled for pterygium excision under local anesthesia, and undergoing minor ocular surgery for the first time. Excluded were patients who have undergone previous ocular surgery, those taking other oral pain medication or other modes of analgesic therapy for other medical conditions, and those with diagnosed renal or liver failure. Informed consent was obtained from all participants. Patients were asked to report 2 hours before their scheduled surgery and advised to have their lunch prior to oral intake of oral diclofenac to reduce the incidence of gastric irritation. The participants were randomly assigned by toss coin to one of two groups: placebo or diclofenac. One hour prior to the scheduled surgery, the study participants were given one tablet of either 50-mg diclofenac or 100-mg ascorbic acid (control).

A single surgeon, blinded as to the status of preemptive analgesia, performed the pterygium excision under local anesthesia using the standard bare-sclera technique. 0.2% mitomycin C was applied over the bare sclera. The surgeon also gave the postoperative instructions, including the use of postoperative analgesic.
The primary outcome is the determination of the pain score within 30 minutes and 24 hours after surgery using the visual analog scale (VAS). The VAS pain-scoring system is a scale that ranks the level of pain from zero (no pain felt at all) to 10 (being the most painful or intolerable type of pain). The secondary outcome was the use of postoperative analgesic by the patient. The same investigator, blinded as to the medication received by the patient, conducted the pain survey within 30 minutes after the surgery and asked the participant to indicate the pain score felt during the procedure. She also retook the pain score at postoperative day 1 and noted whether additional analgesic was taken. The sample size was computed based on the result of the study by Reuben that showed a standard deviation of 0.7 for the control and a mean difference of 1.3 between the treatment and control groups. The sample size was calculated based on an α-error level of significance of 95% and a β-error level of significance of 90%. Each study group, therefore, had a minimum sample size of 15. The data were entered in SPSS version11 and analyzed using the t-test comparing the mean between the control and treatment groups. Chi-square and the Fisher’s exact tests were used to compare nominal data.

DISCUSSION
Pain intensity following induction of surgical trauma can be controlled not only by local wound infiltrate of anesthesia that blocks peripheral nerves, but also by antiinflammatory medications. The amount of pain sensation is related to the amount of inflammation induced during surgery. Thus, blocking pain sensation by reducing postoperative inflammation is a logical option to reduce pain intra- and postoperatively.
Diclofenac is an NSAID that inhibits both peripheral and central pain. As a cyclooxygenase inhibitor, it reduces the release of inflammatory mediators in the cyclooxygenase pathway, resulting in reduction of inflammation and pain sensation. 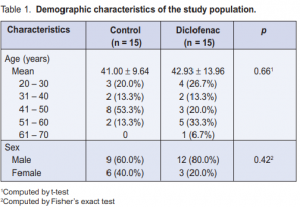 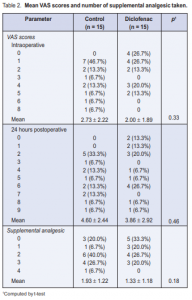 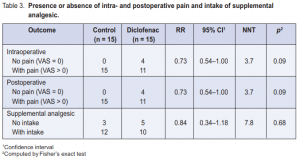 Many surgeons still prescribe postoperative analgesics on “as needed” basis depending on the patient’s level of pain tolerance. With better understanding of surgical trauma and resultant inflammation, there is growing interest in giving analgesics much earlier to minimize pain during and after surgery. The concept of preemptive analgesia is to minimize intra- and postoperative pain by giving analgesic before pain occurs and before local anesthesia wears off. Such intervention may lead to better management of postoperative pain.
Our study found diclofenac to be an insufficient preemptive analgesic following pter ygium excision. Although there was a trend toward greater reduction in the VAS pain scores in the diclofenac group, meaning that a surgeon would only need to treat 1 out of 4 patients to get a reduction in the intra- and postoperative-pain scores—a 25% pain reduction—this was not statistically significant. The need for supplemental analgesic, mefenamic acid in this study, was also less in the diclofenac group, but the trend was not statistically significant. One explanation for diclofenac’s insufficiency as a preemptive analgesic may be its half-life of 1 to 2 hours, which is rather short compared with 50 hours for other oral pain medications. The more ideal analgesic is one that is potent enough that the patient will no longer have to take any form of supplemental therapy postoperatively. It is noteworthy that even though the mean pain scores were generally low in both the control and diclofenac groups during the intraand postoperative periods, the participants still had to take some form of supplemental analgesic postoperatively. Newer NSAIDs, such as rofecoxib and piroxicam, were used in arthroscopic knee surgery 6 and laparoscopic surgery 7 respectively and found to be significantly effective in reducing postoperative pain as measured by VAS scores (p = 0.005 and p < 0.05 respectively). Intake of supplemental analgesic was also found to be significantly less in these studies (p = 0.0001 and p < 0.04 respectively). Rofecoxib, a cyclooxygenase-II inhibitor, has been withdrawn from the market due to its side effects while piroxicam is still available. It has a longer half-life of approximately 57 hours, 8 permitting once-daily dosing. It is rapidly absorbed in the body, with peak plasma concentration within an hour following intake. Piroxicam can, therefore, be a more suitable preemptive analgesic.
Although diclofenac failed to demonstrate conclusively its usefulness as a preemptive analgesic in pter ygium excision, this study is limited by its small sample size. Larger sample using stronger NSAIDs may be more appropriate in demonstrating the utility of preemptive analgesia in ocular surgery.
In summary, the preemptive use of oral diclofenac showed a trend toward less intra- and postoperative pain and less need for supplemental analgesic after pterygium surgery