Disclosure: The authors have no financial interests or relationships to disclose.

Glaucoma is the third leading cause of bilateral blindness in the Philippines. Due to the insidious nature of the disease, symptoms usually occur only when the disease is at an advanced stage. Early detection and diagnosis are keys to reducing blindness. In an archipelago like the Philippines, accessibility to eye health care remains to be a major challenge, especially in rural and remote areas where there are few or no ophthalmologists, specifically glaucoma specialists. This hindrance to quality ophthalmic care can be addressed by a combination of remote diagnosis through teleglaucomaprograms and portable, inexpensive, and easy-to-use devices to document the optic disc and central visual field.

Various portable optic nerve imaging devices have been developed, and studies showed comparable results between monoscopic photographs of the optic disc and traditional tests, such as stereoscopic disc photographs and clinical examination.1 Agreement between the parameters evaluated in a regular slit-lamp biomicroscopy of the optic disc compared to that of a fundus photo taken with a smartphone have been studied, showing no statistical significant difference between the two.2,3 Kumar and colleagues compared non-mydriatic photographs to standard clinical examination by a glaucoma specialist and reported the sensitivity was 67.4% and 69.8%, respectively, and specificity was 93.6% and 97.2%, respectively.4 Vingrys et al. conducted small validation studies using the tablet iPad3 as a portable tangent perimeter and showed that it was a reliable device to detect the deviations in visual fields with 97% test-retest reliability and was robust to environmental factors of miosis, blur, viewing distance, and ambient illumination.5,6

This was a prospective, cross-sectional, single-center study involving 96 eyes of 51 subjects conducted over one month. Forty-seven (47) eyes served as controls with no co-morbid eye diseases, except for dry eye, cataract, or error of refraction, and without histories of glaucoma, ocular trauma, and ocular surgery except for cataract removal. Forty-nine (49) eyes from adult subjects with prior diagnosis of glaucoma confirmed by a glaucoma specialist and with optic disc changes and visual field defects consistent with the disease were enrolled. Subjects below 18 years of age, those with atypical optic disc features, and with contraindications to any material used for the examination were excluded from the study.

Printouts of the fundus photos and visual fields were anonymized and were assessed by 2 independent, masked, glaucoma specialists. In cases wherein adjudication was needed, participation of a third glaucoma specialist was called. Visual field tests were graded as either suspicious for a glaucomatous field defect or none. Fundus photos were rated according to the following parameters: (1) image quality, (2) glaucomatous or not, (3) vertical cup-to-disc ratio, (4) focal notching of rim, (5) rim pallor, (6) lamina cribrosa visibility, (7) baring of vessels, (8) overpass cupping, (9) bayoneting of vessels, (10) peripapillary atrophy, (11) retinal nerve fiber layer defect, and (12) presence of disc hemorrhage.

The primary outcome measures of the study were the sensitivity and specificity rates, the positive predictive and negative predictive values of the iPhone photos and MRF test results against the Visucam and HFA, respectively. Secondary outcome measures included accuracy in the identification of the different parameters in the iPhone photos, correlation of each parameter with the Visucam photos, and the inter-rater agreement.

The study was approved by the Institutional Review Board of the hospital. Written informed consent was collected prior to patient enrollment.

Sample size calculation was performed using Epi Info version 7. Based on the sensitivity of monoscopic photos to detect glaucoma at 67%, a margin of error of 10%, and confidence level of 95%, the minimum sample size requirement was 96.

Data was analyzed using the SAS program. Data that were ungradable by the readers were excluded. Quantitative variables were summarized as means with standard deviations, while qualitative variables were tabulated as frequencies and percentages. To determine the diagnostic accuracies of the iPhone fundus photos and MRF against the standards Visucam camera and HFA, respectively, sensitivity, specificity, positive and negative predictive values were computed. Modality agreements between the different categorical parameters of the fundus photos were analyzed using Cohen’s kappa test and correlation between the continuous parameters (i.e. vertical-cup-disc ratio) was assessed using Pearson’s correlation coefficient.

Image quality of all Visucam photos were graded good by the readers. Nineteen (19) [19.8%] iPhone photos had poor image quality including 7 that were ungradable due to either a media opacity or overexposure of the disc. The ungradable eyes were excluded from analyses, reducing the sample size to 89.

Out of the 42 glaucomatous eyes photographed using the iPhone 6s+, 42 (100%) were graded suspicious for glaucoma. Out of the 47 control eyes in the same group, 42 (89%) were assessed as normal. The overall diagnostic accuracy of the iPhone group is shown in Table 1. The accuracy for detecting specific features of glaucoma using the iPhone and Visucam are shown in Table 2. Pearson’s correlation of the vertical-cup-disc ratio (VCDR) assessment between the iPhone photos and Visucam was 0.89 (p<0.001). Agreement between graders using the 2 modalities had kappa values all above 0.61 (Table 3). 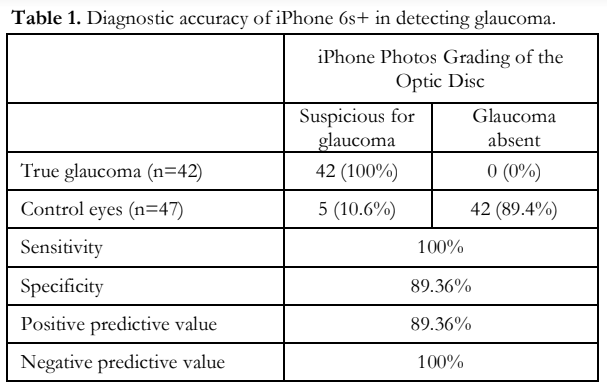 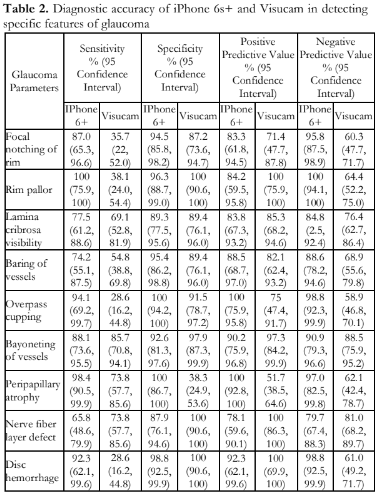 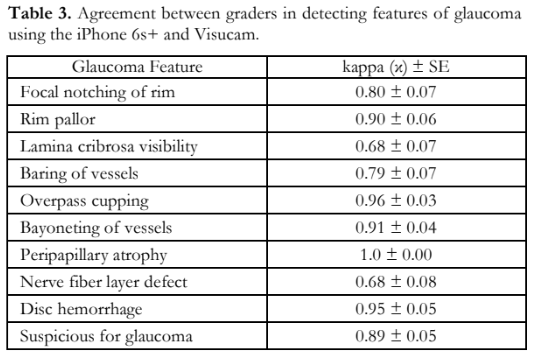 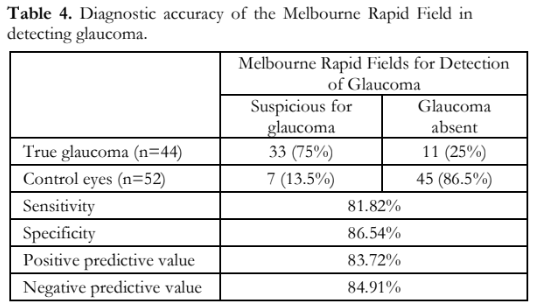 With the influx of new ways to obtain diagnostic tests for glaucoma, many of the platforms are geared toward portability and cost-effectiveness. The validation of these new devices is important to be able to ensure accurate results, and enable their use as substitutes in areas where eye centers with the standard machines are unavailable or inaccessible.

The overall results of this study evaluating the use of the iPhone and the iPad showed that there is promise in the use of these devices. For the iPhone 6s+ fundus photos, although not all of the images proved to be as clear as those taken with the Zeiss Visucam 500, most of the photos were accurately assessed by the readers. The sensitivity and specificity were high, indicating the ability to detect glaucoma in images read on iPhone photos in those with glaucoma of 100%, and in normal of 89.36%. The positive predictive value was 89.36% and the negative predictive value 100%, showing that the photos were reliable as long as good quality images were obtained. Poor image quality could result in differences in assessment of VCDR and in detecting specific parameters, such as disc hemorrhage, nerve fiber layer defect, lamina cribrosa visibility, and rim pallor. Most poor-quality iPhone images resulted from either a glare that obstructed the view of the optic disc, making it overexposed, or a substantial cataract opacity that rendered the image blurry, not seen with the Visucam photos. Thirteen (13) iPhone photos needed adjudication by a third reader, with 7 images assessed as unreadable.

Among the 10 parameters compared between the two methods, the most accurate using the iPhone were peripapillary atrophy, rim pallor, and overpass cupping (Table 2). The parameters that were least accurate were retinal nerve fiber layer defect, baring of vessels, and lamina cribrosa visibility. For the Visucam photos, the most sensitive parameter was bayoneting of vessels and the most specific parameters were nerve fiber layer defect, presence of disc hemorrhage, and rim pallor. The least specific parameter was determining the presence or presence of peripapillary atrophy, as this was present in both glaucomatous and non-glaucomatous eyes.

The assessment of the VCDR by the graders using the iPhone and Visucam photos showed good agreement (Pearson’s r = 0.89; p<0.0001). Graders had a lower agreement using the iPhone (r = 0.82; p<0.0001) than the Visucam (r = 0.96; p<0.0001). The assessment of the specific glaucoma features also showed good agreement (Table 3) between the two modalities, highlighting the potential of using smartphone fundus photos.

The Melbourne Rapid Fields application on the iPad 3 showed good sensitivity and specificity, positive predictive and negative predictive values (Table 4). Agreement between the MRF and HFA in the detection for glaucoma was good with kappa value of 0.68 ± 0.07. There were more fixation losses (13.5%) in the MRF than the HFA (3%), with repeated tests more frequent in the MRF. One factor leading to more fixation losses was the movement of the central dot around the iPad causing the patient to refocus constantly. Another factor was the need to touch the iPad screen at a red square elsewhere on the screen causing breaks in fixation. The use of a clicker is an advantage for the HFA, which can be paralleled with using a keyboard instead of touching the screen that the MRF supports.

Although our results were promising, improvements in the validation test could be performed by increasing the sample size, especially for glaucomatous eyes. Seven (7) iPhone photos with glaucoma were of poor image quality and ungradable and not included in the analyses, raising the possibility of overestimating the sensitivity. Future studies on grading the severity of specific glaucomatous features and the likelihood of glaucoma can be done. The use of stereoscopic optic disc photograph in the evaluation of the optic nerve head can also be incorporated. Further analyses of the reliability indices with logistic regression of the summary measures, such as hemifield test, visual field index, mean deviation, and pattern standard deviation can be performed. Studies on correlating the visual field and fundus photos to improve the accuracy of diagnosing glaucoma can be conducted with the use of portable, telemedicine-friendly modalities.

In summary, the portable devices of the iPhone 6s+ fundus photos and iPad Melbourne Rapid Fields visual field test show great promise as potential substitutes to supplement the detection of glaucoma in settings where conventional equipment is not available or glaucoma specialists are only available through telemedicine. Further validation studies are still needed.