“Curse of the Celts”: Rosacea

ROSACEA is a chronic, persistent, progressive, and potentially life-disruptive skin disease that affects the cheeks, nose, eyes, chin, and forehead.  It is characterized by recurrent episodes of flushing, papules, and pustules that occur in the central region of the face against a livid erythematous background with telangiectasias. Later, there may occur diffuse hyperplasia of connective tissue with enlarged sebaceous glands. The disease usually affects individuals between 30 and 50 years of age. It is a relatively common disease, especially in fair-skinned people of Celtic or northern European heritage, hence the term “Curse of the Celts.” The disease is estimated to affect at least 5 percent of Americans or some 13 million people. Although it is said that women are more often affected than men in earlier stages (3:1 ratio), men develop the tissue and sebaceous-gland hyperplasia leading to rhinophyma much more frequently.

CASE REPORT
A 16-year-old Filipino female with fair complexion consulted at the outpatient clinic of the Department of Ophthalmology and Visual Sciences, University of the Philippines–Philippine General Hospital (UP–PGH)for recurrent bilateral eye redness accompanied by burning sensation, whitish corneal opacities, and blurring of vision. Seven years prior, she started experiencing episodes of bilateral eye redness, pruritus, lid puffiness, and frequent styes that resolved spontaneously. Two years later, she again experienced eye redness, discharge, and tearing in both eyes (OU) associated with episodes of facial redness in hot environment or during consumption of spicy foods. Consultation at UP–PGH was made when the symptoms became more severe, associated with foreign-body sensation, photophobia, and periorbital edema. Initial diagnosis was staphylococcal blepharo-keratoconjunctivitis, which was managed with regular lid scr ubs and antibacterial/antiinflammatory eye drops. During the same year, she started to develop “pimples” over her face. When the symptoms recurred two years later, she consulted a general ophthalmologist and was diagnosed to have “sore eyes” and prescribed eye drops. At consultation, visual acuity was 5/60 with no improvement on pinhole (NIPH) in OD and 3/60 NIPH in OS. Intraocular pressures were 11 and 12 mm Hg respectively. Both eyelids were swollen with matting of the lashes, er ythematous and crusted margins, blocked meibomian glands, hyperemic conjunctivae with diffuse papillary reaction, bilateral whitish corneal opacities, and peripheral neovascularization involving the inferior twothirds of the cornea in OU (Figure 1). Facial rash was also present. Initial consideration was atopic keratoconjunctivitis. The presence of papules and pustules on the cheek, chin, forehead, and their concentration on the nose giving a bulbous characteristic, led to a revised diagnosis of rosacea blepharo-keratoconjunctivitis. Incision biopsy of the left cheek revealed histopathologic findings (Figure 2) consistent with rosacea.

The diagnosis of rosacea is largely dependent on the clinical findings, particularly the skin manifestations. There are no histological, serological, or other diagnostic tests specific for rosacea. Ocular manifestations alone are nonspecific, leading to frequent misdiagnosis. Browning and colleagues observed that the problem of underdiagnosis can be attributed in part to the failure of ophthalmologists to inspect the entire face. Twenty percent of patients can present with nonspecific ocular problems of rosacea prior to the development of the skin lesions. There are no criteria for making a definitive diagnosis. Rosacea is known for its chronic and persistent course. Differential diagnosis includes herpes simplex, which presents as epithelial or stromal keratitis with neovascularization, but is usually unilateral, and cutaneous lesions present as clear vesicles on an erythematous base. Other differential diagnoses for cutaneous manifestations are seborrheic dermatitis, systemic lupus erythematosis, and acne vulgaris.
The precise etiology of rosacea is still unknown. Key causative factors identified are abnormalities of small blood vessels and an abnormal inflammatory response. A review by van Zuuren et al. 7enumerated the following possible contributing factors: • association with gastrointestinal tract diseases
• infestation with Demodex folliculorum
• exposure to heat and sunlight
• alcoholic beverages
• personality disorders/emotional stress
• hot drinks (esp. coffee and tea) and spicy foods
• pilosebaceous abnormalities
• free oxygen radicals
• bacterial protein production at different temperatures
• hormonal influences
• follicular involvement
• staphylococcal infection and type IV hypersensitivity reaction 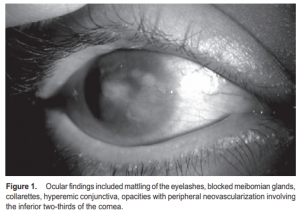 Chronic meibomian-gland inflammation and blood-vessel dysfunction were cited as possible etiological factors with increased bacteria along the eyelid margin. These bacteria break down lipid secretions from the meibomian glands into inflammatory by-products that may irritate the ocular surface. Allergic reactions can also affect the external eye and eyelid by causing vascular flushing and triggering mast-cell activation. These can cause ocular irritation, hyperirritability, itching, burning, and swelling of the eyelid. Keratitis is the most common complication of ocular rosacea. It may be secondar y to a delayed staphylococcal hypersensitivity or a direct invasion of the cornea by the organism. There is damage to the blood vessels of the lids associated with swelling and meibomian-gland dysfunction with resultant tear-film instability and ocular-surface problems.

There is no cure for rosacea. It can only be controlled by long-term treatment. Patient compliance is important. Management includes lifestyle modifications (avoiding triggers, use of sunblock) and conventional therapies like lid hygiene and warm compress. Topical metronidazole (0.75 and 1% gel, applied once or twice daily) is the main therapy for rosacea. It is most active for inflammatory lesions and it may have some effect on erythema. Tetracyclines are the most commonly prescribed oral medications for rosacea to control inflammation. Typically, treatment is started at a higher dose and lowered as the disease quiets. Combination therapy with oral and topical medications often gives the best results. In cases of severe rosacea, telangiectasias and persistent erythema are effectively treated with pulsed dye laser and fibrotic rhinophyma can be managed surgically using CO2 laser or hot-loop recontouring method. The patient was started on metronidazole (Robaz) 0.75% gel applied to her face twice daily, doxycycline (Doxin) 100 mg BID, and tobramycin + dexamethasone (Tobradex) lid scrub HS. After two months, the dose of oral medication was halved and subsequently reduced. A few months later, the corneal lesion diminished in size and visual acuity improved to 6/12 OD and 6/7.5 OS. Ocular symptoms and skin lesions also resolved.

In conclusion, increased awareness of cutaneous lesions associated with ocular findings by the clinician leads to earlier diagnosis and treatment of rosacea and prevents permanent eye impairment.