MODERN retina surgery has increased the success rate of retinal reattachment worldwide. Despite anatomical
success, however, decreased postoperative vision is common, which may be due to macular edema, macular
hole, epiretinal membrane, macular scar, hemorrhage, or cysts. Since its introduction, optical coherence tomography (OCT) has become an indispensable tool in evaluating the macula. In post-retinal-detachment surgery involving patients with grossly attached macula and decreased vision, OCT has been used to demonstrate the presence of residual submacular fluid.1-3 This submacular fluid disappears 6 to 12 months postoperatively.4 Other OCT findings are epiretinal membranes, macular thickening, macular holes, and small retinal pigment epithelial (RPE) detachments.

In a single institution, a subset of post-detachmentsurgery patients complained of poor vision despite
anatomic success, i.e. macula-on. It is thought that using the OCT will partly explain this phenomenon. This study sought to describe the incidence of macular abnormalities detected by OCT among macula-off retinal-detachment patients who have undergone retinal-detachment surgery. It also investigated any associations between pre- and postoperative vision, macular thickness, duration of detachment, and the type of surgery done with respect to OCT findings.

METHODOLOGY
During their regular follow-up in the retina clinic, patients with decreased visual acuity (VA) despite successful reattachment of the retina were identified. Patients with significant postoperative cataract and/or vitreous and corneal opacities, optic-nerve changes (e.g. glaucoma, atrophy) were excluded. Data about the location of the retinal detachment, involvement of the macula, initial visual acuity, time until repair, time until
OCT, and type of surgery were recorded. Best-corrected visual acuity (BCVA) was recorded using the standard
Snellen eye charts and converted to the logarithm of the minimum angle of resolution (logMAR) for data analysis. Patients with VA of counting fingers at 1 foot and 2 feet were assigned a vision of 20/8000 and 20/4000, respectively. Patients with VA of hand movement in the affected eye were assigned a vision of 20/10,000 or almost negligible vision. The patients underwent OCT. There was no specific time frame as to the conduct of the OCT, the decision of which was based on clinical judgment and expressed patient dissatisfaction in the visual result. The standard Stratus OCT (Zeiss Meditech, San Leandro, CA, USA) was used, with 6 radial macular scans of 6-mm length each at angles separated by 30o. 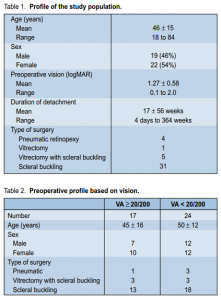 The OCT results were read by experienced retina specialists. Macular thickness was measured, plus other
significant findings, such as subfoveal fluid, macular cysts, macular hole, and epiretinal membrane. 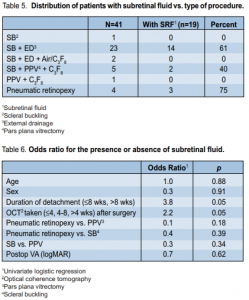 RESULTS
Forty-one eyes of 41 patients (19 males) were included, all of which had unsatisfactory vision after retinal
reattachment surgeries. The mean age of the patients was 46 ± 15 years (range, 18 to 84 years; median, 47). The estimated average duration of detachment prior to surgery was 17 ± 56 weeks (median, 4 weeks) (Table 1). The preoperative vision is shown in Table 2. Surgical procedures included scleral buckling (SB) only
(1 eye), SB with external drainage (24 eyes), SB with external drainage and air/C3 F8 injection (6 eyes), SB with pars plana vitrectomy and C3 F8 (5 eyes), pars plana vitrectomy with C3 F8 (1 eye), and pneumatic retinopexy
(4 eyes). All patients achieved retinal reattachment after 1 surgery only (Table 1). BCVA was taken using corrective lenses and pinhole. The mean preoperative VA was 20/380 (range, hand movement to 20/25; median, 20/440) while the mean postoperative VA was 20/130 (range, counting fingers to 20/40; median, 20/100). There was a strong positive linear relationship between pre- and postoperative logMAR VA (r = +0.46, p < 0.003), which suggested that patients with good preoperative vision had better postoperative VA.
The Pearson Product Moment Correlation test showed a weak positive relationship between the number of
weeks of retinal detachment and postoperative logMAR VA (r = 0.30, p < 0.055). This meant that the longer the retina was detached, the poorer was the postoperative vision.

Not all patients had improved vision after retinal reattachment (Table 3). Six patients had worse vision after
surgery, 2 of whom had subretinal fluid (SRF) on OCT, 2 foveal thinning, 1 mild macular thickening, and 1 normal image. One-way ANOVA showed no significant difference between the types of surgery and postoperative logMAR VA (f = 0.29, p < 0.75). The OCT images were taken at between 3 days and 34 weeks after surgery (mean, 6.6 ± 6 weeks; median, 5 weeks). Eighteen patients had their images taken within
4 weeks after their surgery, 10 at between 4 and 8 weeks, and the rest (13) after 8 weeks. ANOVA comparing these three groups with respect to postoperative VA showed no significant difference (f = 0.33, p < 0.72). The average macular thickness was 254 ± 60 µ (range, 204 to 447 µ; median, 250 µ). There was a strong positive correlation between macular thickness and postoperative logMAR VA (r = 0.35, p < 0.02, Table 4), which implied that the thicker the macula, the worse the vision (higher logMAR value). The OCT images obtained showed various retinal abnormalities (Figures 1 to 4). Nineteen (49%) patients exhibited pockets of SRF (Figure 1), 6 (15%) had foveal thinning, 5 (12%) had macular hole (Figure 2), and 1 each had foveal cyst (Figure 3), cystoid macular edema (CME), and epiretinal membrane. Of the 19 patients with pockets of SRF, 14 (74%)
underwent SB with external drainage, 3(14%) had pneumatic retinopexy, and 2 (10%) were post-scleral buckling and had vitrectomy and C3 F8 (Table 5). Odds-ratio analysis involving the presence or absence
of SRF in the OCT showed a significant relationship with the duration of retinal detachment and the length of time when the OCT was taken after the surgery (Table 6). A patient who waited more than 8 weeks before going to surgery had a four-fold chance of having SRF compared with a patient who had the surgery done within 8 weeks or less (p = 0.045). Furthermore, patients whose OCTs were taken later after surgery had twice the chance of having SRF on OCT compared with those whose OCTs were taken at 4 weeks or less (p = 0.05). 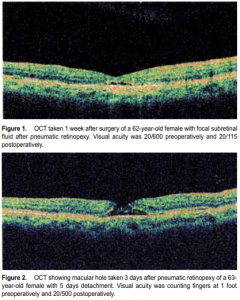 Patients who underwent pneumatic retinopexy had a 2.5-fold chance of having SRF on OCT compared with
those who had scleral buckling. However, this was not statistically significant (p = 0.39).

Visual recovery after retinal-detachment surgery is highly dependent on the length of time that the retina
has been detached. Animal studies have shown that cat retinas detached for 3 to 7 days had limited atrophy,5
while those detached for 13 to 30 days had progressive loss of photoreceptors.6 It can be inferred from these findings that reduced VA may be due to decreased photoreceptor-layer cellularity, which persists even after successful retinal reattachment. The results of this study showed that patients with good vision prior to surgery generally had better vision upon retinal reattachment. These results also showed that the duration of detachment did not significantly affect postoperative VA although there was a weak positive correlation, in contrast to the common belief that the sooner the retinal reattachment, the better would be the visual outcome. With the advent of OCT, the world of ophthalmology has been given the chance to see an almost histological image of the retina in vivo. Its uses have been tremendous, if not revolutionary, in the understanding and management of retinal diseases and, to a certain extent, in explaining altered or abnormal vision. This study was consistent with other studies that used OCT to explain abnormal vision after detachment surgery. In the paper by Schocket and colleagues2 involving 17 retinaldetachment patients, alterations in the URH OCT reflectivity of the inner and outer segments’ junction among postoperative patients were interpreted as photoreceptor damage, thus explaining incomplete visual recovery. Their OCT findings also showed that 59% of patients had epiretinal membranes, 18% had residual subretinal fluid, and 12% had CME. More recent studies showed that microstructural foveal abnormalities seen on OCT can explain poor visual outcome after retinaldetachment surgeries.7-8 This study revealed similar findings in that almost half of the patients had residual subretinal fluid while the rest had epiretinal membrane, macular hole, CME, foveal cyst, or foveal thinning. The pathophysiology of SRF formation is unknown. Some authors attributed it to ensuing inflammation after scleral buckling9 while others deemed it due to the effect of scleral buckling on both the subfoveal choroidal10 and retinal-blood flow.11 Gibran and associates12 theorized that the cause of fluid accumulation in the macula may be a localized loss of adherence of the RPE to Bruch’s membrane due to surgical-trauma-induced inflammation. Their study explained that the disturbance of the adherence of RPE and Bruch’s membrane theoretically permits access of fluid from the choroid to the subretinal space. This theory is still highly debatable until further experimental hemodynamic studies are done in the future. Although the SRF may explain the lower-than-expected VA after retinal reattachment, a study by Hyun et al.13 involving 44 eyes showed that the final VA was not associated with SRF extent and duration.14 Our findings were consistent with those of their study and showed that postoperative vision was almost similar regardless of the presence of SRF. Ultimately, the role of SRF on visual function remains to be established considering the varying evidence presented with limited sample size. In this study, SRF was present regardless of the type of surgery performed. Among those who had scleral buckling, injecting air or C3 F8 did not influence the presence or absence of SRF. Gibrand and Cleary15 showed that 63% of their post-buckling patients initially had SRF while none occurred among their post-PPV patients. Similar findings were reported by Hagimura et al.16 and Wolfensberger.17 We could not make a comparison of the 2 procedures as there was only 1 case of simple PPV with C3 F8 . This study showed no correlation between macular thickness and age, sex, duration of detachment, time of OCT, and preoperative vision. However, there was an inverse correlation with postoperative vision. Thicker macula was associated with poorer vision and this may be due to the presence of edema, worsening the VA. Other studies with serial OCT evaluation, however, showed positive correlation with postoperative VA and thickening of the neurosensory retina.18

The limitations of this study included the relatively small number of patients for the different procedures and the different duration of detachment and OCT acquisition. More importantly, this study lacked follow-up OCT studies and information on subsequent disappearance of SRF and possible improvement of vision. Hence, longer duration of observation with follow up OCT studies would help establish any correlation among the parameters studied, such as macular thickness and VA. In summar y, OCT images of various macular abnormalities may explain the persistent post-detachmentsurgery visual reduction. The presence of subretinal fluid was four-fold greater in those who had surgery more than 8 weeks and 2.5-fold greater in those who had their OCT taken more than 4 weeks after surgery. There was a positive correlation between pre- and postoperative visual acuity, and an inverse correlation between macular thickness and postoperative vision.