MEASUREMENT and characterization of the optic disc have an important role in the evaluation of optic-nerve
diseases. Several studies have indicated that optic-disc morphology varies significantly with the type of refractive error. Specifically, the area and diameter of the optic discs were significantly greater in the group with myopia than in the nonmyopic group.1 Myopia has been repeatedly reported to be a risk factor for developing primary openangle glaucoma (POAG).2-3 The World Health Organization estimates that worldwide 2.4 million new cases of POAG are diagnosed yearly.4 An estimated 5.2 million individuals are blind because of glaucoma, 3 million of them because of POAG.5 Theories about myopia as a risk factor for developing POAG include bigger optic discs and weaker supporting structures because of a wider optic-disc area. The question is whether optic-disc area in relation to refractive error is a predictive factor for the development of glaucoma. This study measured the optic-disc area of the subjects using optical coherence tomography (OCT), and correlated the area with the type of refractive error.

METHODOLOGY
Seventy-three healthy Filipinos aged 20 to 60 years were recruited into the study from January 2008 to July 2008 during routine eye examination at the University of the Santo Tomas Hospital. All had best-corrected visual acuity of at least 20/40. Those with intraocular pressure (IOP) higher than 21 mm Hg, history of intraocular surgery, cataract, retinal pathology, and neurologic diseases were excluded. All subjects underwent a full ophthalmologic examination including visual acuity, automated refraction, IOP measurement with Goldmann tonometry, and dilatedfundus evaluation. OCT (Stratus OCT, Carl Zeiss Meditec Inc., Dublin, CA,
USA) was performed by a single operator. Fast optic-nervehead imaging was performed with 6 radial linear scans centered on the optic-nerve head. All scans had a signal strength of at least 7. 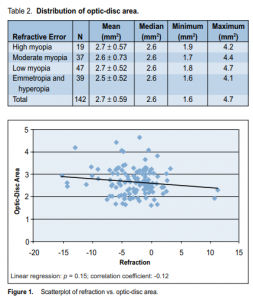 DISCUSSION
Aside from perimetric changes, evaluation of the opticnerve head constitutes an important part of glaucoma
diagnosis. Controversy, however, exists regarding the relationship between optic-disc size/area and refractive
error.7 The study by Jonas and Dichtl reported that the optic-disc area among patients with POAG enlarged with increasing myopic refractive error.1 Similar results were seen in nonglaucomatous eyes with high myopia.8 Jonas9 and Wang6 et al. found that the optic-disc area was statistically independent, with refractive error within the range of –8 to +4D. The results of this study also showed no significant relationship between the optic-disc area and the different groups of refractive error. The Rotterdam study, however, found that the disc area increased by 0.33 mm2 linearly for each diopter increase toward myopia, and these increases
were not significantly different in eyes with refractive error between –4 and +4D.10
The mean optic-disc area of 2.7 ± 0.59 mm2  in this study was similar to that of the Chinese population in the Beijing Eye study6 (2.65 ± 0.57 mm2 ). This is to be expected as Filipinos and Chinese are of Asian descent. However, differences in ethnicity may still account for differences in susceptibility of myopic patients to glaucoma, but which is outside the scope of this study. The question arises whether the relation between high myopia and the degree of glaucomatous optic-nerve damage can be applied to Filipinos. The role of OCT in the assessment of structural damage to the optic nerve and retinal-nerve-fiber layer (RNFL) has revolutionized the assessment of glaucoma. Diagnosticcapability studies11-15 demonstrated moderate sensitivity with high specificity and reproducibility, making it a useful tool in this study. Limitations included possible algorithm
difference in eyes with huge peripapillary atrophy in which the borders may not correspond to the actual disc margin.7 Moreover, much of the disc information could be missed by extrapolating the disc measurements from 6 linear cross-sectional scans.7 Jonas and Dichtl1 noted that optic-disc morphology showed increasing optic-disc area with increasing myopic refractive error greater than 8D. While it was found in this study that those with high myopia have bigger optic-disc area, significant relationship was not established possibly
because of the small number of subjects in this category. Further studies with bigger sample in each category may indicate stronger relationships. Measuring the axial lengths of each subject will further confirm the relationship of axial myopia with optic-disc area. In summary, this study showed that optic-disc area is
independent of refractive error and may not be a predictive factor in determining whether myopia is associated with glaucoma.