Correlation of ocular ultrasonography with histopathologic findings in intraocular retinoblastoma

RETINOBLASTOMA is the most common primary intraocular tumor in childhood. A 35-year (1967 to 2001) epidemiologic survey of retinoblastoma at a tertiary referral center in the Philippines  showed a high incidence (237 per 100,000 eye cases) despite advances in medical technology and therapy. Ocular ultrasonography (UTZ) usually provides a fairly accurate diagnostic evidence using echoes to describe intraocular structures, especially in hazy or opaque ocular media. However, echo patterns in retinoblastoma are widely varied and may be misinterpreted for other intraocular disease entities. Local studies have shown a 16% misdiagnosis of 48 enucleated eyeballs —8 false positives and 1 false negative. This can result in missed or delayed diagnosis of the tumor, or in extreme cases, the enucleation of an eye with benign lesions with consequent lifetime cosmetic problems and complications associated with the use of an ocular prosthesis. There has been no detailed study describing and directly correlating specific echo patterns in B- and A-scans of retinoblastoma with explicit anatomic tissue structures demonstrated by matching histopathologic features. The histopathology has been utilized mainly to confirm the diagnosis. This study compared the echo patterns in ocular vector B-scans and A-scans of retinoblastoma in eyes that underwent enucleation with its corresponding histopathologic features. It aimed to establish a more objective and accurate basis for interpretation of retinoblastoma via UTZ. We also determined the nature, extent, degree of malignancy, viability, and other intraocular lesions, such as calcification, tumor necrosis, areas of hemorrhage, total retinal detachment with tumor, and choroidal extension, as seen in retinoblastoma.

METHODOLOGY
New cases of retinoblastoma seen from January 1994 to December 2003 at the University of the PhilippinesPhilippine General Hospital (UP-PGH) were reviewed. Included were patients who underwent enucleation and whose eyeballs were processed at the pathology section of the Institute of Ophthalmology, University of the Philippines Manila (n = 122 ). The eyeballs were preserved overnight in 10% formalin solution and calottes were cut in the horizontal meridian, except in cases where it was necessary to cut in another meridian to highlight a special lesion. The s l i ced pa r a f f in blocks were s t a ined in Hematoxylin–Eosin (H & E) dye. Repeat sections of the paraffin blocks were done for unacceptable slides. Good quality ultrasonographic printouts were obtained with the Alcon Ultra Scan 2 D 20 MHz with depth of 30 mm and sensitivity or gain of 80.

A combined B- and A-scan record was made. Good matching clear histopathology and UTZ sections were chosen (n = 27) by one of the investigators (RBE). All others were excluded.
A retina specialist (RBE) reevaluated the echo patterns in the UTZ while an ophthalmic pathologist identified and correlated areas of interest. The UTZ printouts (combined B- and A-scans) with the corresponding eyeball sections and high magnification photomicrographs (computed tomography) were arranged side by side for easy comparison as shown in Figure 1. Pertinent data (age, sex, presenting symptoms) and histopathologic diagnosis were also included. Areas of interest such as detached retina, overlying vitreous, the retinoblastoma tumor, subretinal serous fluid, and the degree of malignancy and viability of the tumor also were included (Figures 2 to 7, 9 to 13). Demographic and clinical data were correlated and analyzed.

RESULTS
Twenty-seven enucleated eyeballs from 25 patients were included in this study. Two patients had both eyes enucleated. There were 16 males and 9 females with mean age of 21.75 + 16 months. The youngest was 2.5 months and the oldest 5 years old. In classifying the extent of retinoblastoma, we adopted our modified system of classification as follows:
Stage 1 – Intraocular (confined to the retina)
• Tumor < 1/2 of retinal surface
• Tumor > 1/2 of retinal surface
Stage 2 – Far advanced (tumor extends to other parts of the eyeball)
Stage 3 – Extraocular and/or metastatic The most common clinical presentation was leukocoria (19 cases), followed by congestive glaucoma (3), lid swelling (2), and esotropia, ciliary staphyloma, and early atrophia bulbi (1 ea ch) . Almos t 60% (16) were enucleated at stage 2 retinoblastoma and 40% (11) at stage 1. Pearson’s cor rel a t ion coef f i c ient showed a positive but insignificant relationship (r = 0.3) between gender and the preoperative clinical staging of retinoblastoma.
Mos t of the tumor s (23) were undifferentiated. The most prominent histologic features were necrosis, pseudorosettes, and calcific plaques (Table 1).
Each histologic lesion showed characteristic B- and A-scan patterns. Highly undifferentiated malignant cases (pseudorosettes) showed fine, grainy densities on B-scan and short to medium broad spikes ( “V–W” pattern) located in the middle of the vertical Y axis of the A-scan (Figure 2). Moderately differentiated or less undifferentiated cases with moderate necrosis and early calcification showed denser grains on Bscan and multiple, high, thin spikes interspersed with a few high, broad spikes reflecting early calcium plaques on A-scan (Figure 3). Welldifferentiated compact viable tumor cells showed a white, dense mass on B-scan and initial high spike with very high internal reflectivity or even plateauing on A-scan and no calcific deposits (Figure 4). Complete tumor necrosis or liquefaction was seen as echolucent areas on B-scan and flat or low spikes on A-scan (Figure 5). Benign retinoblastoma—often called retinoma, regressed retinoblastoma, retinal dysplasia or immature retinal rosettes—is controversial and will not be discussed extensively. It is included for completeness and because the eyes were clinically diagnosed as retinoblastoma preoperatively. B-scan showed fine densities with complete retinal detachment and A-scan showed multiple thin, high spikes with no evidence of calcification (Figure 6).
Calcific plaques were seen as large dense white nodules on B-scan and high broad spikes on A-scan and with associated prominent areas of echolucent liquefaction necrosis (Figure 7). The ultrasound patterns of the normal vitreous, serous subretinal fluid, and fresh hemorrhage were the same as those of liquefaction necrosis (Figures 9, 10, 11). Choroidal extension of the tumor was manifested as thickened, dense choroid with high internal reflectivity (Figure 12). 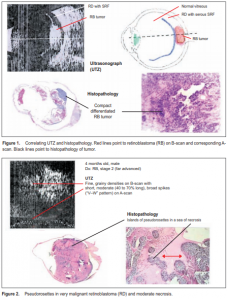 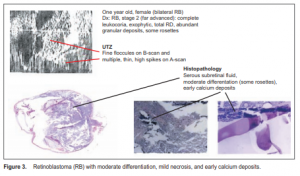 The typical eyeball lesion of total retinal detachment infiltrated by tumor and with serous subretinal fluid or subretinal hemorrhage is shown in Figure 13. The internal reflectivity depends on the degree of differentiation and viability of the tumor.
Retinoblastoma showed multiple lesions on histopathology (Table 1), as well as on UTZ (Figure 14). This is helpful in differentiating it from single homogenous lesions such as endogenous endophthalmitis or vitreous hemorrhage (Figure 15).

DISCUSSION
An analysis of the histopathologic findings of the retinoblastoma cases studied showed that necrosis, pseudorosettes, and calcific deposits were the most frequent findings (Table 1). Less common were hemorrhages, which may be subretinal, intratumoral or vitreous, choroidal extension, and true rosettes. All of these findings showed corresponding UTZ patterns. Retinoblastoma exhibited five characteristic UTZ patterns depending on the degree of differentiation— from most malignant (pseudorosettes) to benign (retinoma or retinal dysplasia)—varying cell density, compactness, and viability. Pseudorosettes or most malignant RB 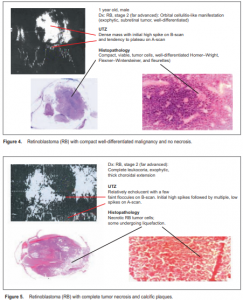 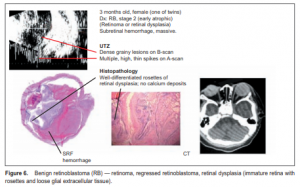 (Figure 2) The pseudorosettes are seen as malignant cells surrounding a retinal vessel forming round and/or elongated islands in a “sea of necrosis.” The B-scan shows fine, grainy densities and the A-scan a typical “V-W pattern” of spikes that are short to medium in length, broad in thickness, and located at the middle portion of the scan. The spikes are not tall, indicating less dense and less compact cells due to rapid cell division. The spikes are broad, reflecting the wide area of necrosis forming the downward slope of the V pattern. The V does not reach the bottom because liquefaction necrosis is not yet complete and suspended necrotic particles are still present on histopathology, producing a low but not zero reflectivity. Pseudorosettes are more frequent in the endophytic type of retinoblastoma where the vitreous is avascular, in contrast to the exophytic type that grows toward the vascular choroid.

The cell types are more differentiated, compact, and viable—Homer-Wright and Flexer-Wintersteiner varieties. Some rosettes are present. The B-scan shows small dense floccules closely grouped. The A-scan shows thin and high spikes; the upward limb of the spike is tall and long, indicating that the cells are more dense and compact; the downward limb of the spikes is also long, indicating a large difference in density between cell groups and extracellular fluid. This difference is one of the factors that determine the height of the spike.
True rosettes are also denser than pseudorosettes. Occasional high, slightly broader spikes are seen, corresponding to early calcium plaques and early necrosis. This feature is not specific to retinoblastoma as other intraocular lesions can produce this pattern (Figure 15).

The B-scan shows a dense, almost uniform mass. The Ascan shows a characteristic but nonspecific feature, initial high spike followed by flattening at the top (plateauing). Histopathologic correlation shows well-differentiated tumor cells (Homer-Wright, Flexner-Wintersteiner rosettes, and fleurettes), which are compactly arranged and viable, and absence of necrosis or calcium.

Although previously referred to as cystic, retinoblastoma has no true cysts. The B-scan shows an area of echolucency or transparency (zero reflectivity). The Ascan shows a flat or low spike, reflecting absent or weak echoes.

Calcific plaques were seen in 62% of the cases studied. In retinoblastoma, the calcium deposits are secondary to necrosis. The B-scan shows dense, white plaques, either solitary or multiple, and associated with areas of necrosis. By lowering the sensitivity of the UTZ, the plaques are better seen with shadowing (Figure 8).

The normal vitreous has zero or very low reflectivity. It is echolucent on B-scan and has flat or very low spikes on A-scan. The vitreous collagen fibrils (vitrein) are smaller than the resolving power of the ultrasonograph used (200 um); they can not reflect back sound waves. When the fibrils break up on vitreous liquefaction (a colloidal gel–sol conversion) and form clumps or when cells (red blood cells, pus cells, tumor cells, etc.) invade the vitreous, the vitreous then becomes visible.

Serous subretinal fluid, composed mainly of fluid exudate and similar to normal vitreous, has zero or very low reflectivity. On B-scan, it appears echolucent and situated behind the detached retina seen as a line membrane or as a single, high spike on A-scan. 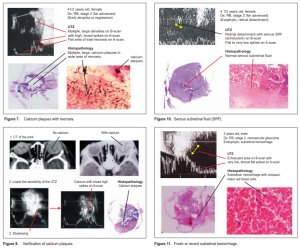 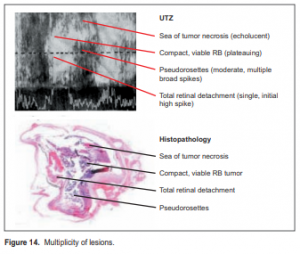 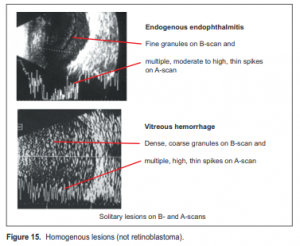 The choroidal involvement in retinoblastoma is the result of exophytic growth of the tumor. On UTZ, the retina-choroid-sclera complex, or the retina alone, may be totally detached with SRF exudates or subretinal hemorrhage. The choroid shows a diffuse or localized, dense mass on B-scan and high reflectivity on A-scan. The tumor cells show moderate differentiation on histopathology. No necrosis is present because of the high vascularity and increased blood flow in the choroid. 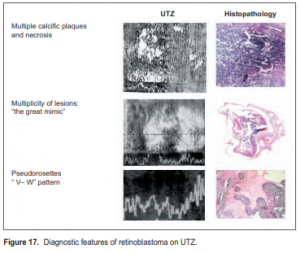 This UTZ pattern is included because it is easily confused preoperatively with nonretinoblastoma intraocular lesions manifesting mainly as leukocoria with a Y-shaped pattern (PHPV, Stage 5 ROP, Coates’, Retinal Dysplasia). In retinoblastoma, a total retinal detachment with the stalk attached to the optic disk and the subretinal space filled with serous fluid or hemorrhage is seen. The tumor growth is endophytic toward the vitreous and the stalk is thickened by tumor infiltration. B-scan shows multiple, dense calcium plaques and A-scan shows high internal reflectivity with broad, high spikes corresponding to the calcium plaques. Histopathologic sections show the plaques and the moderately differentiated tumor cells.

The authors gratefully acknowledge the statistical analysis made by Dr. Donna Ma. Santiago and the financial assistance given by United Laboratories, Inc. for the preparation and printing of the colored photographs.