GOLDMANN applanation tonometry (GAT) gained widespread and rapid acceptance after its introduction in the 1950s. Its status as a gold standard went largely unchallenged for 50 years. When Goldmann and Schmidt presented their applanation tonometer, they stressed certain possible sources of error. Central corneal thickness (CCT) was one of them. In 1975, Ehlers cannulated a number of otherwise normal eyes undergoing cataract surger y and correlated corneal thickness with errors in GAT. He found that it most accurately reflected true intracameral intraocular pressure (IOP) when CCT was 520 µm, and that deviations from this value resulted in an over- or underestimation of IOP by as much as 7 mm Hg per 100 µm. Others reported thicker corneas in patients with higher IOP compared with thinner corneas in patients with lower IOP. On the other hand, some reported that the effect of CCT on IOP was small and not clinically relevant. In a study by Ventura et al., CCT was found to be significantly higher in patients with ocular hypertension (OHT) than in normal individuals or those with either normal-tension glaucoma, primary open-angle glaucoma, or pseudoexfoliation glaucoma, there being no significant differences between the latter four groups. Some authors recommended a recalculation of the IOP depending on the CCT with a correction factor ranging from 1 to 6.8 mm Hg per 0.1 µm CCT. Differences in CCT were also seen among different racial and ethnic groups and may lead to misclassification of patients with normal-tension glaucoma and OHT. CCT has recently been added to the list of risk factors for glaucoma and its progression. The Ocular Hypertension Treatment Study (OHTS) was a National Eye Institute– sponsored prospective multicenter 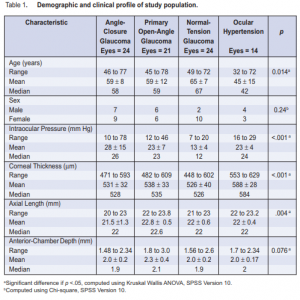 randomized study designed to determine the efficacy of early pressurelowering intervention in patients with OHT. The OHTS convincingly demonstrated that CCT plays an important role in risk stratification among patients in whom glaucoma was of concern. At present, there are no published data correlating IOP with CCT among Filipino glaucomatous patients. The only published data measured CCT and IOP in normal Filipinos.
The SEAGIG Practice Guidelines Study Group has cited the need for information on CCT and ocular dimensions of patients in the Southeast Asian region. This study determined the distribution of CCT, axial length, and anterior-chamber depth among patients with glaucoma and ocular hypertension, and correlated the average CCT and IOP, the average CCT and age, the average CCT and central AC depth, and the average CCT and axial length, of ocular hypertensives and each type of glaucoma. A formula was generated for adjusting IOP measured by applanation to compensate for variations in CCT.

METHODOLOGY
Patients newly diagnosed with OHT and primary glaucoma were recruited from the Glaucoma Clinic of the Philippine General Hospital from March to May 2005. They were classified as ocular hypertension if IOP is > 21 mm Hg but less than 35 mm Hg on 2 determinations taken on different days, with no glaucomatous defects on standard achromatic perimetry, and C/D ratio ≤ 0.5 and no other glaucomatous features on the optic-nerve head (ONH). They were diagnosed with primary open-angle glaucoma (POAG), 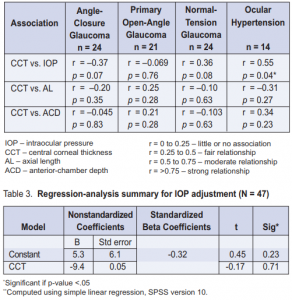 normal-tension (NTG), and primary angle-closure (ACG) if optic neuropathy was present on the ONH and/or characteristic glaucomatous defects on standard achromatic perimetry. The following were excluded: secondary glaucoma including pseudoexfoliation and pigmentary glaucoma; primary glaucoma with corneal pathology; contact-lens wearers of more than 6 months’ duration; those who underwent previous intraocular surgery (cataract, penetrating keratoplasty, filtering, etc); and those with history of antiglaucoma-medication use for more than 6 months immediately preceding the recruitment. Patients included in the study were seen by a single examiner (JGS). Proparacaine hydrochloride (Alcaine 0.5%, Alcon-Couvreur, Belgium) was given as a topical anesthetic before IOP, CCT, and other ocular dimensions were taken. IOP was measured 3 times using a Goldmann applanation tonometer (Haag-Streit, Bern, Switzerland) and the average was obtained and recorded. CCT was measured 10 times using an ultrasonic pachymeter (Tomey SP-3000, Tomey Corp., Nagoya, Japan) after instilling a lubricant (Tears Naturale II, Alcon-Couvreur, Belgium) and the results were averaged and recorded. Ultrasound biometry (Ultrascan, Alcon, Fort Worth, Tx, USA) was used to measure the central anterior-chamber depth and axial length. All instruments were disinfected with 70% isopropyl alcohol between each use. The instruments were calibrated daily prior to each use. Descriptive statistics and measures of central tendency were obtained. Discrete categories were compared using Chi-square test and continuous variables were analyzed by Kruskal Wallis analysis of variance. Pearson correlation were obtained to determine relationships between different variables (e.g. IOP and CCT). To calculate the constant or conversion factor for the best corrected IOP, a double comparison of 2 separate linear regression analyses (with theoretical normal value of IOP as dependent variable) was performed. Standardized predicted values and their residual statistics were obtained and compared. All statistical tests were carried out using Statistical Package for the Social Sciences (SPSS Version 10) and were pegged at an alpha .05 level of significance. The study was approved by the ethics committee of the Research Implementation and Development Office of the University of the Philippines College of Medicine and complied with the Helsinki Declaration. 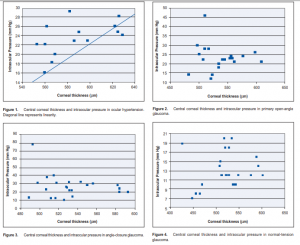 Conversion factor for IOP adjustment in relation to CCT measurements Based on the normal value for CCT in Filipinos of 531.5 ± 33.8 13 , we subtracted each value of the CTT per glaucoma categor y and OHT to obtain the mean difference from the normal value. The calculated difference was entered into a simple linear-regression model (IOP normal range of 10 to 21 mm Hg) to obtain the standardized predicted values. Another regression analysis compared the mean difference of the CCT and the subtracted values of IOP per disease category and the normal IOP range and obtained the standardized predicted values. The two predicted IOP values were averaged and divided by the mean CCT per disease category to come up with a constant to be subtracted from the existing IOP values as correction factor per CCT (µm) increase (Table 3). Results showed that the constant 5.3 mm Hg should be substracted as a correction factor to the actual IOP measurement obtained with GAT for every 100 µm increase in CCT from the normal Filipino mean of 531 µm. 13

DISCUSSION
Patients with OHT had significantly higher CCT than those with NTG, POAG, or ACG. There were no significant differences among the three glaucoma groups. Other studies showed similar results. In the studies of Copt and Singh, the thickest CCT was seen in OHT and the thinnest in NTG. OHT is a condition for which the major diagnostic criterion is increased IOP. Previous studies have demonstrated the positive correlation between CCT and IOP. Patients with OHT have statistically greater mean CCT than those with glaucoma, similar to the results of this study. Patients with OHT have been found to be younger than those with the three types of glaucoma.
Our study showed significant difference in age distribution; the youngest were OHT patients. Rapuano and Nemesure reported that a greater mean CCT was found in younger patients who have glaucoma. This correlation is consistent with our study wherein an inverse relationship between age and CCT was found. Herndon and associates noted that axial length did not have any effect on CCT. There was no statistical difference between correlation of axial length and CCT in all of the four groups in our study. Herndon et al. did not observe a correlation between anterior-chamber depth and CCT. Our study yielded a fair, positive relationship between these two factors in eyes diagnosed with OHT, but the results were not statistically significant. An increase of 5.3 mm Hg in IOP per 100 µm increase in CCT was noted. This constant should be subtracted from (or added to) the actual IOP values obtained with GAT to correct for CCT increase (or decrease) from the normal Filipino mean of 531 µm to avoid overestimation (or underestimation) of the true IOP. Limitations of the study included the need for a larger sample of patients with OHT and glaucoma and corresponding normal variants to compare the corrected IOP between the groups. Moreover, the equation with the constant should be tested in a larger population. In conclusion, this study showed that CCT among Filipino patients with OHT was thicker than those with NTG, ACG, or POAG. A direct correlation was seen between CCT and IOP of OHT patients, also seen in other studies. Taken together, they suggest that corneal thickness may be a significant confounding factor in the diagnosis and classification of OHT