Implantation of standard intraocular lens (IOL) following cataract surgery corrects spherical refractive errors. However, patients with astigmatism still depend on spectacles for cylindrical correction.It has been estimated that 15% to 29% of patients with cataract have more than 1.50 diopters (D) of pre-existing astigmatism.1,2 This can be reduced or eliminated through astigmatic keratotomy, relaxing incisions, excimer laser keratectomy, and toric IOL implantation; all of which have their own advantages and disadvantages.

Astigmatic keratotomy combined with cataract surgery can improve a patient’s chances of excellent uncorrected postoperative vision. Limitations of this technique include lack of precision and reproducibility of incision depth and length, wound gape, epithelial ingrowth into the incision, infection, haze, scarring, and rarely, corneal perforation.3 Recently, studies on femtosecond laser technology seem to minimize these limitations. One advantage of femtosecond incisions is that they are customisable and adjustable, enabling the surgeon to create an incision according to the desired size, shape, length, and depth. In a study by Venter et al, the use of femtosecond laser astigmatic keratotomy improved mean uncorrected distance visual acuity (UDVA) from 0.18 ± 0.14 to 0.02 ± 0.12 logMAR, and cylinder from 1.20 ± 0.47D preoperatively to 0.55 ± 0.40D after surgery.

Limbal relaxing incision may be used to correct up to 3.5D of astigmatism through the use of a knife or blade, and more recently with femtosecond laser. The procedure is fast, easy to perform, gives highly predictable results, and is inexpensive. In a study by Carvalho et al, there was a significant improvement of best corrected visual acuity (BCVA) from 0.9 ± 0.7 logMAR preoperatively to 0.1 ± 0.1 logMAR at 1, 3, and 6 months postoperatively. There was also a significant reduction in the mean topographic astigmatism from 1.93 ± 0.58D preoperatively to 1.02 ± 0.60D at month 6 after surgery.

Excimer lasers (LASIK) have been used successfully to correct low to moderate astigmatism. Barraquer and Gutierrez evaluated LASIK in correcting hyperopic compound astigmatism in 111 eyes. Mean residual cylinder was -0.61D at 6 months and 71% of the eyes had UDVA of 0.50D or better.6 In another study by Kymionis et al, LASIK was found to be effective and predictable in terms of obtaining very Ophthalmologygood to excellent uncorrected visual acuity for eyes treated with mild to moderate astigmatism (less than 2.0D).

Today, toric IOLs represent a significant advance in achieving both optimal cylindrical and spherical refractions after cataract surgery, offering greater predictability and precision in the visual outcome of patients. The main advantage of toric IOLs over the cornea-based procedures mentioned above is that it can correct the sphere, cylinder, and cataract in a single-step procedure without creating an additional wound on the cornea. Several studies have found that different models of toric IOL are effective in astigmatic correction.8-17 However, rotation after toric IOL implantation has been a major concern.

Accurate positioning and rotational stability are essential for any toric IOL to function properly. The efficacy of astigmatic correction can be reduced by 33% in as little as 10 degrees of axis mis- alignment.

In most cases, capsular bag shrinkage due to fibrosis causes IOL rotation following uneventful cataract surgery.31 This is usually observed within the first 3 months after implantation.32 Specifically, the postoperative rotation of toric IOLs seems to occur in the early postoperative period of around 1 month, and remains constant after 6 months.24

Toric IOLs are available in different platforms.There are C-loop designs, such as the Alcon Toric (Alcon Laboratories, USA) and the Envista Toric (Bausch and Lomb, USA) series; plate haptic designs, such as the AT Torbi (Carl Zeiss, Germany) and Lentis Toric (Oculentis, Germany) models; and the double C-loop design with 4-point fixation POD-FT (Physiol, Belgium). All claim to have rotationally stable platforms. With the various options available, it is important to determine if there is a difference in rotational stability among these lenses. Since we had been using the same standardized surgical technique in cataract surgery and lens implantation, there is an opportunity to study and compare the IOL rotation in eyes we previously implanted with the various models of toric IOLs.

It is crucial for a toric IOL to maintain its position for consistent performance. Significant deviation from the intended axis causes deterioration of visual acuity, and, therefore, defeats the purpose of implanting a toric IOL. The significance of our study was in determining the toric IOL that demonstrates the greatest rotational stability. Patients with corneal astigmatism that will undergo cataract surgery in the future will be aided in deciding which specific toric IOL to choose.

This was a prospective, analytical, cross-sectional study of patients who previously underwent phacoemulsification and were implanted with a toric IOL. Prior to cataract surgery, these patients had visually significant cataracts and had a preoperative corneal astigmatism of 0.75D or greater. The study followed the tenets of the Declaration of Helsinki, and all patients provided their written consent. Patients who came for postoperative follow up between January to September 2014 were invited to participate. Inclusion criteria were patients aged 40 years or older with preoperative regular corneal astigmatism of 0.75D or greater, were implanted with either AcrySof, Envista or FineVision toric IOL (Figure 1), and had at least 3 months of postoperative follow up. Patients with intraoperative complications (e.g., zonular dehiscence, capsular bag tear, etc.) were excluded. 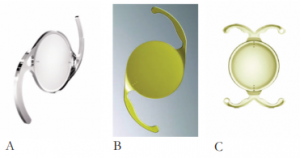 Prior to cataract surgery, a toric IOL calculator was used to determine the IOL power and the intended axis. On surgery day, while the patient was sitting up, ink marks were placed on the corneal limbus to mark 12, 3, 6, and 9 o’clock positions. During surgery, additional marks were placed on the cornea to coincide with the intended axis of placement based on the toric IOL calculator. After the lens was implanted, viscoelastic material was thoroughly removed in the anterior chamber and under the lens. Before ending the surgery, the dot or hash marks on the IOLs were checked to ensure that they were aligned to the intended axis based on the preplaced corneal marks. Any deviation afterwards was presumed to be caused by IOL rotation. A single surgeon performed all the cataract surgeries. Postoperative care followed routine standard of care after cataract surgery.

Patients previously implanted with toric lenses who came for routine follow up were invited to participate in the study. After securing informed consent, patients underwent vision testing, manifest refraction, slit lamp examination, and intraocular pressure test. The enrolled subjects’ eyes were then dilated using tropicamide with phenylephrine (Sanmyd-P, Santen, Japan) eye drops and were viewed through the slit lamp. Proper positioning was ensured by placing the subject’s head squarely on the chin rest, with both lateral canthi aligned with the marker on the slit lamp. IOL axis was determined by rotating the slit-lamp beam to align with the IOL toric markings (Figure 2). The axis deviation (in degrees) was computed as the difference between the intended axis as determined by the toric IOL calculator and the actual axis as read from the slit-lamp gauge that coincided with the IOL axis placement. Slit-lamp photos were taken for documentation. No surgical intervention was performed in this study. 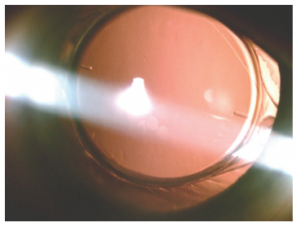 Data were analyzed by getting the mean and standard deviation of patient demographics, refractive and visual outcomes. Axis deviations from the intended axis were determined, and comparison between the three groups was analyzed using F test through one-way ANOVA. The level of significance was set at p of less than 0.05.

Table 2. Comparison of the mean IOL axis deviation among the 3 groups (N=68 eyes).

Table 3. Mean and percent cylinder reduction among the 3 groups.

Table 5. Pre- and postoperative UCVA and BCVA (LogMAR and Snellen) for the 3 groups. 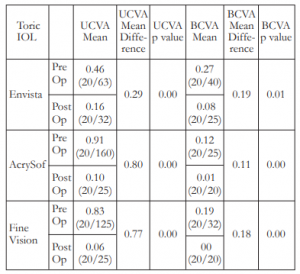 There are several ways of correcting corneal astigmatism during cataract surgery; namely, astigmatic keratotomy, limbal relaxing incision, and toric IOL implantation. Each has its own advantages and disadvantages.

In a study by Titiyal et al, toric IOL was similar to astigmatic keratotomy in terms of residual cylinder and visual acuity.33 The mean preoperative and postoperative refractive cylinders were 2.00 ± 0.49D and 0.33 ± 0.17D in the toric IOL group, and 1.95 ± 0.47D and 0.57 ± 0.41D in the keratotomy group. There were no differences in UCVA or BCVA between the two groups at any follow-up visit. However, corneal incisional solutions can be unpredictable due to factors including differences in nomogram, surgical techniques, and patient corneal biomechanics.

In order for a toric IOL to be the preferred option, it has to demonstrate consistent cylinder reduction and rotational stability.

This study compared the rotational stability of three different toric IOLs. The Envista and AcrySof platforms have a C-loop haptics design, whereas the FineVision has double C-loop 4-point-fixation design. The AcrySof has monofocal and multifocal toric models; the Envista has a monofocal toric model; and the FineVision has a multifocal toric model. We confined our analyses to rotational stability, cylinder correction, refractive outcomes, and distance vision measurements. Evaluation of presbyopia-correcting metrics were beyond the scope of this study.

Axis deviation and axis rotation have been used interchangeably and denote the shift in lens position from the time the IOL was implanted based on the axis recommended by the toric calculator to the time the IOL was evaluated at a specific time point after surgery, which in our study was a minimum of 3 months postoperatively. Any difference in IOL position was presumed to be caused by rotation after implantation.

To our knowledge, this is the first report of the Envista and FineVision toric platforms. Previous studies on other toric IOL platforms reported axis deviation to be between 0.9 to 4.42 degrees. The mean axis rotation was 2.47 degrees for Envista, 2.66 degrees for AcrySof, and 2.75 degrees for FineVision. These findings were consistent with the standards set by the other platforms of toric IOLs. There was no significant difference in the rotational stability of these 3 IOLs. All (23/23) eyes in the Envista, 98% (32/33) in the AcrySof, and 92% (11/12) in the FineVision groups had axis rotation of 10 degrees or less. It is believed that every 10 degrees of axis shift will cause a reduction in the cylinder correction of the lens by approximately 33%. We did not perform any IOL repositioning or IOL exchange in any eye included in this cohort.

In addition to rotational stability, astigmatism correction was significant in all three toric lenses, with mean cylinder reductions ranging from 33% to 67%.Mean postoperative astigmatism ranged from 0.56 to 0.93 diopters. Refractive and visual outcomes were, likewise, excellent.

It is worthwhile to note that the greatest reduction in cylinder was observed in the FineVision group. We theorized that due to the four-point fixation design, the lens remained stable once it was implanted and, therefore, suffered less loss of astigmatism-correcting capability due to post-implantation rotation. Intraoperative observation supported this hypothesis because during the removal of viscoelastic, the FineVision toric lens had less spinning motion compared to the C-loop designs. In addition, C-loop lenses can only be rotated clockwise; so during positioning, if the surgeon overshoots the axis of alignment, he has no choice but to rotate the lens 180 degrees to try to realign the toric marks again. On the other hand, the POD-F design of the FineVision and the plate-haptic design of the Zeiss and Oculentis lenses allow the surgeon to rotate the lens into place in a clockwise or counter-clockwise direction. With equally effective outcomes, ease of use may play a role in the choice of which toric lenses to use.

The common sources of error in axis placement were inconsistent markings, cyclotorsion of the eye, and induction of surgically-induced astigmatism during creation of clear corneal incisions. An iris registration and automated guidance system in conjunction with intraoperative aberrometry are recommended to help increase the accuracy of toric IOL placement and outcomes.

In summary, all three IOLs demonstrated good rotational stability and cylinder reduction. Use of any of the three IOLs (Envista, AcrySof, and FineVision) can give good refractive and visual outcomes.