Comparison of higher-order aberrations: Wavefront-guided versus standard laser in situ keratomileusis in low to moderate myopia

ADVANCES in refractive surgery have given rise to sophisticated techniques for correcting visual errors, hoping not only to correct sphero cylindrical refractive errors (low-order aberrations), but also to decrease a spectrum of higher-order aberrations and achieve optimum quality of vision. In wavefront-guided LASIK, these aberrations are measured with a wavefront analyzer to establish an ablation pattern and correct them through a scanning-spot excimer laser. This procedure aims to reduce the amount of existing aberrations after corneal refractive surgery. But evidence also shows that refractive procedures may increase naturally occurring higher-order aberrations because of the creation of a corneal flap and the effects of variable healing patterns unique to each eye, which cannot be predicted before operation. 1 These may account for reported cases of “glares and haloes,” decreased contrast sensitivity, and irregular astigmatism, resulting in deterioration in the quality of vision even in customized ablation. 2 Thus, it is important to determine whether wavefront-guided LASIK (Zyoptix, Bausch & Lomb, Hiedelberg, Germany) is better than standard LASIK (PlanoScan, Bausch & Lomb, Rochester, NY, USA) in achieving visual outcome and significantly decreasing the overall higher-order aberrations. Using the root-mean-square (RMS) wavefront error, this study compared the changes in higher-order aberrations before and after standard LASIK and wavefront-guided LASIK and correlated them clinically in terms of their effect on visual acuity, contrast sensitivity, and refractive outcomes after one year.

Calculation of the Wavefront-Guided Ablation

Wavefront aberrations are measured, defined, and quantified in terms of Zernike polynomials. Up to 20 coefficients are measured showing the lower-order aberrations of the first- and second-order and the higher-order aberrations of the third to the fifth order. 3 The RMS wavefront error is used to quantify the irregularity of the wavefront. It is expressed as the square root of the squared mean deviation of the higher-order aberrations. 4 The higher the RMS value, the greater are the wavefront aberrations. Three consecutive Zywave measurements were taken with and without pupil dilation under standardized conditions. A single drop of phenylephrine 2.5% was used to dilate each eye instilled twice at 5 minutes interval. Thirty minutes after the second drop, the 3 measurements were repeated. The Zylink (v. 2.3, Bausch & Lomb, Rochester, NY, USA) software for the Zyoptix wavefront-guided LASIK combines the measurements of the Orbscan II and the Zywave aberrometer into a program that calculates the treatment profile of each patient. A single technician performed all Zywave and Orbscan II procedures.

Standardized and uniform LASIK procedures were performed on all eyes at the Vision Laser Center, St Luke’s Medical Center by three coinvestigators (RLBS, WLV, JMS) in this study. After instillation of the topical anesthetic proparacaine HCl (Alcaine, Alcon Laboratories), a superior hinge flap with a diameter of 8.5/9.5mm and a thickness of 160/180 µm was created using a Hansatome microkeratome (Bausch & Lomb, Hiedelberg, Germany). The 193nm 217z Technolas scanning-spot excimer laser (Bausch & Lomb, Rochester, NY, USA) system with a combined 2.0mm and 1.0mm spot was used in the Zyoptix group, and only a 2.0mm spot in the PlanoScan group. The PlanoScan and Zyoptix software programs dictated the ablation patterns for the standard and wavefront-guided treatments, respectively. The mean treatment zones were 6.47 ± 0.48mm and 6.33 ± 0.33mm for the PlanoScan group and Zyoptix group, respectively. After the photoablation, the corneal flap was repositioned and the interface irrigated with a balanced salt solution. Postoperatively, patient used tobramycin 0.3% + dexamethasone 0.1% (Tobradex, Alcon Laboratories, Fort Worth, TX, USA) QID for 1 week and artificial tears as needed. No intraoperative or postoperative complications were encountered.

The RMS and spherical equivalents between groups were compared using independent t-test. Paired t-test was used to compare pre- and postoperative findings in each parameter. Contrast sensitivity results were analyzed using the Marginal Homogeneity Test. Other nonparametric data were compared using the chi-square test. α was set at 0.05. 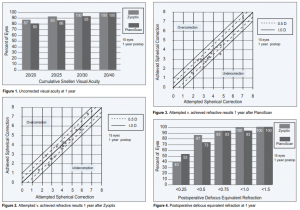 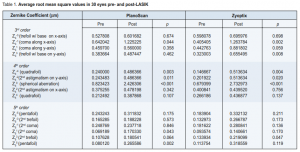 DISCUSSION
In general, higher-order aberrations increase after LASIK. Several studies have shown that this can be due to factors related to the creation of a corneal flap, varied healing patterns, and possibly keratodynamic changes secondary to the effect of corneal tissue loss. 1, 6 In this study, however, no advantage can be attributed to wavefront-guided (Zypotix) over standard (PlanoScan) LASIK in terms of decreasing higher-order aberrations. This exists despite the ability of wavefront-guided LASIK to identify higher-order aberrations and create an ablation pattern to correct them. Although it has been demonstrated that image quality after customized procedures is improved over that of standard procedures (based on decreased higher-order aberrations 7 ), there are still significant aberrations induced after a wavefront-guided procedure that are neither expected nor predicted. It seems that it is not only related to corneal flap; equally important is the effect of corneal healing and tissue reorganization over time. A trend has been observed showing increased wavefront error in all Zernike modes after undergoing standard and wavefront-guided LASIK. Most noticeable is a significant increase in the induction of spherical and coma-like aberrations and secondary astigmatism postoperatively, which is very comparable with the results obtained by Pallikaris et al. 1 describing resulting higher-order aberrations following creation of a LASIK flap. This can be explained partly by the overall central flattening and peripheral steepening of the cornea following LASIK procedures, thereby altering the tension carried in the lamellae, the internal fluid pressure, interlamellar crosslinking, and the load imposed by the intraocular pressure. 6 Several other factors contribute to the existence of these and other higher order aberrations. It has to be accepted that any procedure that circumferentially severs corneal lamellae will produce a biomechanical response that will alter corneal shape in a manner that cannot be predicted with wavefront analysis alone.
9 In fact, in the Third International Congress on Wavefront Sensing and AberrationFree Refractive Corrections, an esteemed panel of experts voted corneal biomechanics the number one problem that limits the ability to achieve the “ideal” refractive correction. In terms of the impact of the amount of higher-order aberrations on visual and refractive outcomes, there is no direct correlation that exists between them. As Applegate et al. pointed out, not all aberrations are “equal,” meaning Zernike modes when combined can interact to improve visual acuity despite the increase in total wavefront error. 8 Nevertheless, this study revealed no significant difference in terms of postoperative visual acuity, change in contrast sensitivity, and postop refraction between the two groups, independent of the total RMS obtained. The number of subjects, however, posed as a limitation to this study. Also, patients included in the study were limited to those with low to moderate myopia and astigmatism, making the findings not applicable to those with high myopia. On the other hand, the results were obtained at one year postop, which is the longest follow-up period to date compared with those in published articles that had postoperative follow-up period of 3 to 6 months. 7,10 Moreover, this study was able to account for inherent variables by using the same patients for both treatments. Although wavefront-guided LASIK proves superior in treating patients with thin corneas and large scotopic pupil sizes 3 , as long as there is creation of a flap, correction of higher-order aberrations cannot be predicted. Experts are now, in fact, looking into the possibility of a two-staged procedure (create a flap first and analyze the induced aberrations before doing wavefront-guided ablation) or even customized procedures not involving the creation of a corneal flap, like in laser-assisted subepithelial keratectomy (LASEK) or photorefractive keratectomy (PRK), to solve this problem. Undoubtedly, much still has to be done, and the future bids optimistic for combined instrumentation for next-generation customized refractive surgery with the integration of topographic and wavefront analysis. LASIK procedures for low to moderate myopia with low astigmatism, in general, increase overall higher-order aberrations (especially spherical and coma-like aberrations and secondary astigmatism). Zyoptix LASIK offers no advantage over PlanoScan LASIK in decreasing higherorder aberrations postoperatively and in obtaining better visual and refractive outcomes based on the treatment software used in this study. It is recommended that future studies have a larger sample base and include patients with high myopia and astigmatism to validate the findings in this study.