Correction of myopia by corneal cutting was introduced in 1996 by Barraquer and Ruiz1. It involved surgical removal of the corneal stroma by a microkeratome. The technique was later improved by Buratto and Pallikaris where the microkeratome was used to create a corneal flap, and then an excimer laser performed the in-situ keratomileusis (LASIK) for refractive correction on the corneal stroma. This produced a more accurate and predictable visual outcome.

Femtosecond laser is a major advancement in corneal refractive surgery. It is a near-infrared neodymium-doped yttrium aluminum garnet (ND:YAG) laser that is based on nonlinear absorption of light and subsequent disruption of the corneal tissue.2-4 It was introduced several years ago to reduce microkeratome-related complications in conjunction with the corneal flap creation. The femtosecond laser was used to create the corneal flap, while the refractive procedure was performed using the excimer laser. This procedure is known as femtosecond laser in-situ keratomileusis or femto-LASIK.

Since then, the use of the femtosecond laser have expanded to other ophthalmologic procedures, such as intrastromal corneal ring segment (ICRS) insertion, astigmatic keratotomies, penetrating keratoplasty, femtosecond lenticule extraction (FLEx), and small

astigmatismincision lenticule extraction (SMILE).5 Femtosecond lenticule extraction (FLEx) involved using the femtosecond laser in a one-step refractive procedure.12-14 Instead of using the excimer laser for corneal stromal ablation, the femtosecond laser creates a flap and a refractive lenticule that corresponds to the patient’s refractive correction. The surgeon lifts the flap, removes the lenticule, and repositions the flap. The corneal tissue is removed, not ablated. Initial studies on FLEx demonstrated it to be a safe and effective refractive procedure.12-15

As a new procedure, there are few studies comparing FLEx to a standard corneal refractive procedure such as femto-LASIK. Hence, we compared the efficacy, safety, predictability, stability, contrast sensitivity, and higher-order aberration of FLEx and femtosecond-LASIK in the treatment of moderate myopia and astigmatism.

A retrospective chart review of FLEx and femto-LASIK procedures performed from November 2011 to June 2012 at the Vision Laser Center (VLC) of St. Luke’s Medical Center-Global City (SLMC-GC) was conducted. Included were those with myopia or myopic astigmatism and a spherical equivalent of -3.00D to -8.00D, preoperative best spectacle-corrected visual acuity (BCVA) of 20/25 or better, target refraction of emmetropia, and at least 18 years of age. Excluded were eyes with targeted refraction for monovision or with inadequate follow-up data of less than 3 months.

All eyes underwent corneal flap creation by VisumaxTM femtosecond system (Carl Zeiss Meditec, Jena, Germany) at the same time period so that calibration and nomograms used were the same. The core refractive surgeons of St. Luke’s Medical Center-Global City performed all the procedures. 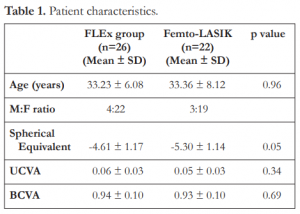 The mean postoperative spherical equivalent was +0.06 ± 0.22 and -0.44 ± 0.35 for the FLEx and femto-LASIK groups respectively at 3 months follow-up. All eyes were within ± 1.0 D of attempted refraction (Figure 4). 100% from the FLEx and 68% from the femto-LASIK were within ± 0.50 D of target refraction. The FLEx group showed a tendency towards hyperopia (overcorrection) and the femto-LASIK myopia (undercorrection) (Figure 4). Stability

had a significant increase in the 3 spatial frequency (p=0.04).

During the follow-up periods for both groups, there were no postoperative complications noted. None of the patients needed re-lift or flap wash.

Visual outcomes of FLEx appeared to be comparable to femto-LASIK. Our results showed that there was no significant difference between the mean UCVA at 3 months follow-up. 92% of the FLEx and 91% of the femto-LASIK achieved 20/25 or better vision at 3 months, comparable to earlier studies on FLEx that reported UCVA of 20/25 or better in 87-90% of cases.12-13,15 The FLEx group, however, had delayed improvement in visual acuity in the early follow-up period, also observed in several studies.12,15

One patient lost more than 2 lines of BCVA and 6 patients lost 1 line, despite the achievement of emmetropia with low residual errors of refraction in the FLEx group. In other studies,13,15 a small percentage also lost at least 1 line of BCVA that decreased at the 6-month follow-up period. Thus, patients may still improve on subsequent follow-ups.

Refraction was stable at 1 week to 3 months of follow-up in the FLEx group. Initial overcorrection seen at 1 day postoperatively (Figure 5) may be due to corneal flap edema. In contrast, the femto-LASIK group was near emmetropia at one day and one week postoperatively, but regressed at one- and three-month follow-up periods.

Several authors reported that LASIK, in general, increases higher order aberrations,6-11 leading to reduced quality of vision, such as glare, haloes, and night-vision problems despite excellent UCVA. Factors identified to increase corneal aberrations were flap creation, corneal lamellar ablation resulting in asymmetric anterior surface flattening, decentration of laser ablation, and wound healing defects.6 In this study, the preoperative and postoperative HOA RMS for both groups did not differ significantly. One limitation was the pupil size determination which was not uniform in the pre- and postoperative HOA measurements of both groups. Thus, further studies measuring the induced HOA after refractive lenticule extraction should be conducted.

The population in the FLEx group represented the first cases of refractive lenticule extraction in the Philippines and the outcomes might have been influenced by the learning curve of the multiple refractive surgeons. Longer follow-ups with a larger sample and followed prospectively will provide a better picture of the safety, efficacy, and predictability of FLEx.

In conclusion, our study showed that FLEx was comparable to femtosecond LASIK in terms of visual outcomes in the treatment of moderate myopia and astigmatism. The FLEx group showed better accuracy and stability at the three-month follow-up period. However, delayed visual improvement and lost of BCVA were noted in some.

Special thanks is given to Dr. Walter Sekundo for sending the full text FLEx articles and to Mr. Janus Relos for the statistical analysis.