Choroidal melanoma in a 49-year-old female

CHOROIDAL melanoma is the most common primary malignant intraocular tumor in adults.1 Its incidence is
lower among Asians than Caucasians.2 Primary choroidal melanoma arises from melanocytes within the choroid.3 Most choroidal melanomas are believed to develop from preexisting melanocytic nevi. At the pathology section of the Institute of Ophthalmology of the University of the Philippines–Philippine General Hospital, 15 patients were diagnosed with choroidal melanoma from January 1997 to September 2005. Females outnumbered males 2 to 1. Their ages ranged from 25 to 70 years, most of them in their 50s.
The patient is a 49-year-old female who complained of blurred vision in the right eye (OD) of five months
duration. There was no history of trauma or other associated symptoms. Previous diagnosis by other ophthalmologists included tumor and retinal detachment.

On consultation, best-corrected visual acuity was hand movement with good light projection in OD and 6/6 for the left eye (OS). Pupils were 3–4 mm briskly reactive, with relative afferent pupillary defect in the right.
Intraocular pressures were 8 mm Hg OD and 12 mm Hg OS. Slit-lamp examination showed clear cornea, formed and deep anterior chamber with no reaction, flat iris plane, and 1+ nuclear cataract in both eyes (OU). Gonioscopy revealed open angles OU. Indirect funduscopy showed an area of detached retina, with shifting fluid, more prominent at the superior half of the posterior pole and superior edge of the disc, and involving the macula. A brownish, pigmented, elevated subretinal mass measuring approximately 15 mm x 13 mm x 10 mm in the superior hemisphere was seen. The left fundus was normal. Ocular ultrasound revealed a dome-shaped mass measuring 9.9 mm in thickness anteroposteriorly and 15.5 mm at its widest diameter, with an initial high spike and mid to low internal reflectivity. There was no choroidal excavation or extrascleral invasion. Fluorescein angiography showed filling of the arteries and beginning enhancement and visualization of the choroidal vessels. There was complete filling of the arterovenous (AV) channels and increased visualization of the choroidal vessels in the late venous phase. Areas of hyperfluorescence admixed with areas of hypofluorescence were seen. Magnetic resonance imaging (MRI) showed a hyperintense dome-shaped mass relative to the vitreous humor (T1) and a hypointense mass relative to the vitreous (T2) in the posterior aspect of the right globe. There was no evidence of extraocular extension. Chest X-ray was normal. MRI of the abdomen ruled out primary malignancy and metastasis. No mass or lymphadenopathy was seen in the abdomen. Liver and renal function tests were normal.

The preoperative assessment was choroidal melanoma with serous retinal detachment (OD). The right eye was
enucleated under general anesthesia, with implantation of a polymethylmethacrylate ball. The optic-nerve was severed with at least 10 mm stump. The anteroposterior cut section of the right globe showed a darkly pigmented choroidal mass measuring 15 mm at its greatest diameter 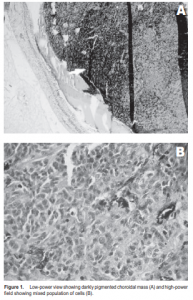 and located superiorly. Based on the modified Callendar classification for the cytologic classification of uveal
melanomas, a diagnosis of mixed-cell-type choroidal melanoma was made (Figure 1). The 2004 report of the Collaborative Ocular Melanoma Study (COMS) classified posterior uveal melanomas according to basal diameter and thickness measured by ultrasound.4 An anteroposterior thickness of 9.9 mm, which this patient had, was classified as large. Several treatment options are available, primarily based on tumor size. Enucleation is indicated for tumors greater than 15 mm in diameter and greater than 10 mm in thickness,3 and in patients who already have irreversible loss of useful vision. Neo-adjuvant and
adjuvant therapies offer no 5-year survival advantage over enucleation alone.4

Follow-up plans for this patient included liver-function test every 3 months, liver ultrasound every 6 months, and artificial-eye implantation after 2 months