THE ADVENT of 5-fluorouracil (5FU) and mitomycin C (MMC) has greatly increased the success rate of
glaucoma filtering surgery and reduced the need for postoperative medications. Both have been associated with thin-walled and cystic filtering blebs. MMC, however, has been correlated with a higher incidence of bleb avascularity, transconjunctival oozing, and leaks, making the blebs more susceptible to infection. The incidence of endophthalmitis in MMC-augmented filtering surgery has been reported higher by 0.2 to 1.5% than those without the use of antifibrotic agents. Another study showed that 7 of 662 eyes treated with MMC trabeculectomy between 1985 and 1995 developed bleb-related infection.

CASE REPORTS
Case 1
A 62-year-old female consulted for acute pain and redness of the left eye (OS) associated with blurring of
vision of one-day duration. The patient had undergone trabeculectomy in OS and laser iridotomy in the right
eye (OD) in 1995 after having been diagnosed with chronic angle-closure glaucoma. She was lost to followup 3 months postsurgery. In 1999, she refused to undergo trabeculectomy in OD and subsequently lost vision in 2004. At consultation, visual acuity (VA) in OS was hand movement with good light projection. Gross examination showed marked congestion with mucopurulent discharge and matting of the lashes. Intraocular pressure (IOP) was 40 mm Hg. Slitlamp examination showed plugged and hyperemic meibomian-gl and orifices and diffuse conjunctival congestion. At the superior nasal conjunctival area was an avascular thin-walled cystic bleb filled with dense inflammatory infiltrates with a necrotic center. Seidel’s test was negative. The cornea was mildly edematous and the anterior chamber (AC) had 4+ cells, 4+ flare, fibrin, and a 1-mm hypopyon. There was no view of the vitreous, optic disc, and retina on both direct and indirect funduscopy. Gonioscopy through hazy media looked open to scleral spur on the temporal and nasal angles and closed superiorly, with no view of the inferior angle. AC and vitreous taps were performed showing no
organisms on gram stain. The vitreous aspirate was clear. Cultures of the AC tap showed light growth of Gramnegative bacilli and Gram-positive cocci in clusters but the organisms were not identified. Ocular ultrasound showed low-reflective granular echoes in the inferior section of the vitreous cavity. Assessment was blebitis with secondary anterior endophthalmitis. Patient was admitted for 11 days and given intravenous moxifloxacin, atropine sulfate 1%, and topical moxifloxacin (Vigamox). Discharge medications included
oral prednisone, moxifloxacin, atropine sulfate, and dexamethasone (Maxidex) ophthalmic drops. At discharge, VA was 6/60 improved with pinhole to 6/15. The left eye was white and quiet and the bleb was devoid of infiltrates. There was trace AC reaction with absence of hypopyon. The fundus showed a good red-orange reflex. 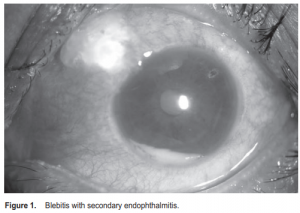 Case 2
A 51-year-old female consulted for acute pain and redness of 3 days’ duration and sudden loss of vision in
OS, associated with increased tearing and mucoid discharge. The patient had been diagnosed with chronic angle closure glaucoma in both eyes in 1999 and initially maintained on antiglaucoma medications but with poor treatment compliance. Laser iridotomy in both eyes in 2000 failed to control IOP. In 2001, both eyes underwent trabeculectomy with MMC (1 week apart), followed by 5 FU injections (0.1 cc of 50 mg/cc) at 2 months postsurgery. In 2002, OD underwent repeat trabeculectomy following bleb failure.
Upon examination, VA was “hand movement with good light projection” in both eyes. Gross examination showed marked conjunctival congestion in OS with mucopurulent discharge and matting of the eyelashes. Pupils were 3 mm equally reactive to light. IOP was 10 mm Hg in OD and 24 mm Hg in OS. Funduscopy in OD showed a cup-disc ratio of 0.8 to 0.9 with superior notching of vessels. There was no view of the left fundus. Slitlamp findings revealed diffuse conjunctival and ciliary injection in OS. The bleb was avascular, cystic, with yellowish mucoid discharge. Seidel’s test was negative. The cornea was hazy and Figure 1. Blebitis with secondary endophthalmitis. edematous, with 4+ cells and flares and a 1-mm hypopyon in the AC. No organisms were seen on both gram and giemsa stain of the conjunctival swab. Gram stain of the AC tap showed many Gram-positive cocci in clusters and few Grampositive cocci in chains. Culture and sensitivity results revealed Staphylococus epidermidis. Ocular ultrasound showed dense vitreous condensations more prominent in the inferior quadrant. The patient was promptly started on intravenous moxifloxacin, with supplemental intracameral and topical moxifloxacin one drop every hour. Atropine 1% eye drop was also started at TID. By the fifth hospital day, there was significant decrease in conjunctival congestion and AC reaction, with resolution of the hypopyon. Pinhole VA was 20/150. Intravenous antibiotic was subsequently
discontinued. Discharge medications included moxifloxacin, atropine, and dexamethasone eye drops.

DISCUSSION
Blebitis, defined as a presumed bleb infection without involvement of the vitreous, can develop months to years following filtering surgery. It usually starts with mild symptoms such as discomfort and redness and progresses to conjunctival discharge and severe conjunctival infection. Untreated, it can progress to bleb-related endophthalmitis, which has a more rapid course with worsening pain, reduced VA, and marked AC reaction. Endophthalmitis is distinguished from blebitis by the presence of vitreous cells.
Blebitis and bleb-associated endophthalmitis are not two distinct entities but a disease in progression. Since the fluid in the bleb communicates freely with the aqueous, the infection may not just be limited to the bleb. On the basis of the clinical course, our patients presented with an infection not confined to the bleb but extending to the AC and possibly the vitreous. Endophthalmitis has been reported to occur more frequently after 3 months postoperatively (1.8%) than immediately after surgery (0.6%).
On average, it occurred 7.7 years (range, 6 months to 18 years) following a filtering procedure. Our 2 patients developed bleb-related endophthalmitis 11 and 6 years after trabeculectomy. The penetration of organisms through the defective conjunctiva overlying the bleb has been suggested as a factor for the development of endophthalmitis. The route of infection involves the “transconjunctival migration” of bacteria, as opposed to early postoperative endophthalmitis which results from introduction of infectious agent at the time of surgery.
Other risk factors cited were type of operative technique, contact-lens use, bleb leak, preceding conjunctivits and upper-respiratory-tract infection, inferiorly located bleb, thin-walled blebs, myopia, conjunctivas prone to cystic formation, increased axial length associated with scleral thinning, and nonocular conditions such as drug abuse, diabetes mellitus, and neoplastic disease. Beck and colleagues also cited poor follow-up while Tabbara and coworkers identified nasolacrimal-duct obstruction (NLDO) as risk factor for the development of bleb-related endophthalmitis. The bacterial flora present in the tear lake and lid margin may contribute to the increased incidence of infection.
Both our patients poorly complied with their follow-ups while patient 1 had partial NLDO with clear back flow. In the absence of prophylactic topical antibiotics, we can surmise that the source of her infection was from her own ocular flora which may have contaminated, colonized, and caused the infection of the bleb. Streptococcus has been identified as the most common organism associated with bleb infections.

Other common organisms isolated were Staphylococcus epidermidis, Haemophilus influenzae, Enterococcus, and Serratia. Although the adjunctive use of antifibrotic agents has improved the success rate of glaucoma filtration surgery, it profoundly alters the morphology of the filtering bleb. Antifibrotics alter the thickness, cellularity, and vascularity of the filtering bleb’s conjunctiva; compromise the bleb’s physical barrier function; and affect the conjunctival contribution to the ocular innate immune response. Matsuo and colleagues noted that filtering blebs treated with antimetabolites show focal or general thinning and depletion of goblet cells that secrete mucin, a highly adhesive substance that functions as a biological barrier on the ocular surface to protect against foreign bodies or microorganisms.

Patients who have undergone filtering surgery and present with blurred vision, redness, and eye pain should
be evaluated immediately for bleb-related infection. The main clinical signs include poor visual acuity, conjunctival congestion, infiltrates or abscess at the bleb site, AC fibrin and reaction, hypopyon, decreased media clarity, and poor fundus visualization. Diagnosis of blebitis should include staining and culture and sensitivity studies of aqueous aspirate. For bleb-related endophthalmitis, culture and sensitivity studies of the
vitreous aspirate should be included. Obtaining conjunctival scrapings or swabs is less reliable. Direct swabbing of the bleb did not improve the ability to identify the intraocular organism from a surface culture and these cultures should not be used to guide the selection of antibiotic therapy. The role of topical antibiotics is imperative in the treatment of blebitis or bleb-related infections. Topical fourth-generation fluoroquinolones are the first line of treatment because they have better tissue penetration and activity against Gram-positive organisms like Staphylococcus and Streptococcus. In the presence of frank posterior endophthalmitis,
intravitreal injection of antibiotics should be done to bypass the blood–retinal barrier and achieve therapeutic levels at the site of infection. Vancomycin, with its excellent activity against streptococcal strains makes it the drug of choice in the treatment of bleb-related endophthalmitis after filtering surgery.  The role of systemic antibiotics is still controversial. Quinolones and imipinem have much better intravitreal penetration when given systemically and a larger antimicrobial spectrum than ceftazidime and amikacin.

In our 2 cases, we used moxifloxacin, a fourth generation quinolone with good coverage for both Grampositive and Gram-negative organisms, good vitreous penetration when given systemically, and can be given
intracamerally with few side effects. The role of long-term antibiotic prophylaxis for posttrabeculectomy patients is controversial as it did not alter the conjunctival flora nor protect against the development of recurrent infections.  Resistance to antibiotics is also a major concern why long-term prophylaxis is not
a common practice. Mochizuki and associates suggested that prophylactic antibiotics should be limited to patients with thin-walled and leaky blebs. Studies have shown that trabeculectomy with a fornixbased flap caused less cystic and leaky blebs and, therefore, less bleb-relaed complications compared with a limbusbased flap.Wells and colleagues retrospectively compared 37 patients who had undergone trabeculectomy with 0.4
mg/ml or higher concentration of MMC from 1995 to 1996 and concluded that the risk of cystic bleb formation, late hypotony, and other ocular infections were more common and occurred earlier in limbus-based flap. Hence, there is a trend to creating fornix-based flap in trabeculectomy and directing the aqueous flow more posteriorly, resulting in a more diffuse bleb. In summary, bleb-related infection is one of the
complications of glaucoma filtration surgery that clinicians should consider when presented with complaints of acute pain, redness, and blurring of vision following trabeculectomy. Diagnosis should include staining, culture and sensitivity studies. Prompt treatment with broad-spectrum antibiotic is paramount to preserve vision. Patients who have undergone trabeculectomy should also be advised of the risks of bleb infection and its
associated signs and symptoms. Regular follow-up should be emphasized. Although the long-term use of
prophylactic antibiotics is controversial, it should be advocated for high-risk patients especially those with concomitant risk factors.