A 77-YEAR-OLD Chinese male, with multiple health problems including ischemic heart disease, congestive
cardiac failure, systemic hypertension, type 2 diabetes mellitus, and benign prostatic hyperplasia underwent
phacoemulsification cataract extraction with foldableacrylic-intraocular-lens implantation in the left eye (OS)
in 2003. A clear corneal temporal incision was made, which was closed with one 10/0 nylon suture. The surgery was uneventful with no immediate postoperative problem. The eye was treated with neomycin, polymyxin B, and dexamethasone drops for 1 week. Seven days postoperatively, vision was 6/24. The tight
suture was removed. Treatment with dexamethasone eye drops was continued for another week. Twenty-two days postsurgery, patient complained of sudden painless blurring of vision in OS of 3 days duration. Ocular examination revealed vision of 1/60 in OS and 6/30 in the right eye (OD). The left conjunctiva was injected and the cornea had striae. There was no elevation of intraocular pressure (IOP). There were 3+ cells in the left anterior chamber with a small hypopyon. The left fundus revealed hazy vitreous with only a glimpse of the optic disc as seen with indirect ophthalmoscope. The right anterior segment was normal with an immature senile cataract. The right fundus was essentially normal. A presumptive diagnosis of endophthalmitis was made.

A vitreous biopsy was performed and patient was given intravitreal antibiotics consisting of ceftazidime 2.5 mg and vancomycin 1 mg plus subconjunctival injection of ceftazidime 100 mg. In addition, hourly topical antibiotics consisting of vancomycin 5% and ceftazidime 5% were given, and topical atropine 1% QID. Gram stain and cultures of vitreous samples did not isolate any fungus or bacteria. After 72 hours, a repeat intravitreal antibiotic injection was given when no significant change was noted in the patient’s condition. After 5 days, the hypopyon resolved with fibrin present on the surface of the intraocular lens (IOL). Topical dexamethasone was initiated. The fibrin slowly contracted and anterior-chamber cells progressively decreased. On day 20, iris bombe developed and a sequential argon-YAG peripheral iridotomy (PI) was
created, relieving the pupil block. On day 25, the anteriorchamber cells decreased to 1+ and patient was discharged with visual acuity of hand movement.

On day 38, iris bombe recurred and sequential argonYAG laser was performed to enlarge the peripheral
iridotomy. B-scan showed retrolental vitreous opacities (Figure 1). On day 70, iris bombe recurred and a second sequential argon-YAG laser peripheral iridotomy was made at 5 o’clock, which relieved the pupil block. Ten months later, visual acuity in OS was 6/18 and fibrin on the IOL surface had resolved significantly. Cyclitic membrane and seclusio pupillae were still present, but the anterior chamber was deep with two patent peripheral iridotomies. Repeat B-scan showed the retina was attached and no
vitreous opacities.

Sudden blurring of vision within weeks of cataract surgery should alert the ophthalmologist to the possibility
of endophthalmitis, the most feared of all postoperative complications. Pain is a prominent feature of severe
endophthalmitis, but early in the course of the infection, the pain may be mild as seen in this case. Apart from pain and blurring of vision, features of endophthalmitis include lid edema, chemosis, conjunctival injection, corneal haze, numerous cells or hypopyon in the anterior chamber, vitritis, absent red reflex, and inability to visualize the fundus even with the indirect ophthalmoscope. Systemic diseases such as diabetes mellitus are risk factors for endophthalmitis. Those caused by Grampositive, coagulase-negative staphylococci occur more frequently among diabetics than nondiabetics. Thus, good diabetes control is important before proceeding with any intraocular surgery.1, 2 Another risk factor is ruptured posterior capsule, which provides intraoperative contact with the vitreous cavity.3, 4 Advanced age and being male have been associated with
increased risk of postoperative endophthalmitis.2 Silicone polypropylene foldable lenses have also been associated with a higher rate of endophthalmitis than polymethylmethacrylate lenses.5 However, no difference has been seen in the rate of contamination between extracapsular cataract extraction and phacoemulsification.6

Poor surgical techniques such as inaccurate wound closure, increased operating time, and excessive surgical manipulation can contribute to the risk.7 Temporal sutureless clear cornea incision has been postulated to be associated with a higher risk of endophthalmitis because the incision site is not protected from the environment by the upper lid. The removal of suture one week after cataract surgery without any antibiotic coverage or other factors such as inaccurate wound construction and closure may have predisposed this patient to endophthalmitis.

Early diagnosis and prompt institution of antibiotics are important. Intravitreal vancomycin is used in all cases of Gram-positive organisms introduced exogenously, which has been noted to be sensitive to this antibiotic.8, 9 Doses up to 2 mg have been found nontoxic to the retina.7 Although a dose of 0.2 mg was found to be sufficient in maintaining intravitreal vancomycin concentration above the minimum 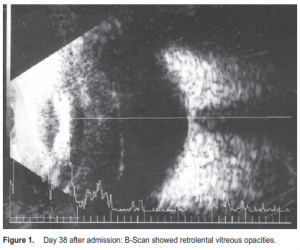 inhibitory concentration for most organisms for 4 days, we adhered to the Endophthalmitis Vitrectomy Study (EVS) recommendation of using 1 mg.8, 10 Intravitreal ceftazidime was used to cover possible gramnegative organisms.10 Amikacin is another option for the Gram-negative bacteria. Both exhibit equivalent activity
with little difference in the likelihood of drug resistance.11, 12 Amikacin, an aminoglycoside, has the advantage of synergistic effect with vancomycin. However, there have been reported cases of macular infarcts at therapeutic doses.13, 14 Ceftazidime, a third-generation cephalosporin is safe but is physically incompatible with vancomycin, requiring injection via separate syringes to prevent precipitation of the drugs.15 The current universally accepted intravitreal antibiotic treatment to provide best coverage for endophthalmitis microorganisms is the combination of vancomycin and either amikacin or ceftazidime,10, 16, 17 which was given in this case. Subconjunctival ceftazidime provided antibacterial coverage to the anterior segment. Ceftazidime, like vancomycin, offers very low vitreous concentrations when given subconjunctivally.18
In the Endophthalmitis Vitrectomy Study (EVS), confirmed microbiologic growth was demonstrated in only
69.3% of intraocular specimens.11 Bascom Palmer Eye Institute reported a slightly higher culture-positive rate
of 75%. 19 Therefore, it is not unusual that no organism was isolated from the patient’s vitreous sample.
In endophthalmitis, samples from both aqueous and vitreous should be sent for microscopy and culture even
though the vitreous yields more positive cultures.20

Vitrectomy also offers no advantage in terms of culture yield when compared with vitreous tap or biopsy.20 No aqueous samples were taken from this patient. But it should have been recommended as it is a safe procedure in experienced hands.21 Introduction of new organism via the paracentesis is unlikely when it is performed using sterile techniques. When initial cultures are negative, such as in this case, a repeat vitreous biopsy with aqueous tap is recommended prior to the second intravitreal injection of antibiotics. Prior to the EVS guidelines, treatment of endophthalmitis involved various combinations of topical, subconjunctival, systemic, and intravitreal antibiotics. Pavan et al. subsequently demonstrated that using intravitreal with no systemic antibiotics resulted in reasonable outcome.22, 23 In the early 1980s, intravitreal
antibiotics became established as the mainstay treatment, while the use of systemic antibiotics and pars plana
vitrectomy remained controversial.24

The 1995 landmark prospective EVS concluded that intravenous ceftazidime and amikacin did not alter the
final visual acuity and media clarity.10 It also found that pars plana vitrectomy was beneficial only in patients who present with vision of “perception to light” only.10 Omission of intravenous antibiotics and performing pars plana vitrectomy only in patients presenting with vision of “perception to light” offer considerably savings in treatment cost without affecting final visual outcome.25 This patient was diagnosed with acute bacterial postcataract-surgery endophthalmitis and managed according to the EVS guidelines. He was treated with repeated intravitreal vancomycin and ceftazidime and intensive topical vancomycin and ceftazidime. No pars plana vitrectomy was performed and no intravenous antibiotics were given. The final visual outcome was 6/18. Figure 1. Day 38 after admission: B-Scan showed retrolental vitreous opacities.