A week in neuro-ophthalmology: the Singapore scene

IN THE year 2000, a comprehensive neuroophthalmology service was established at the Singapore National Eye Center (SNEC), which has expanded over the past 10 years to daily clinics and two full-time consultants. The neuro-ophthalmology clinics serve around 120 patients per week from the 260,000 patients per annum consulting at the SNEC. All actual and suspect neuroophthalmology cases are now directly referred to these clinics, including patients seen from accidents and emergency department, and those originating from neurosurgery and neurology. Virtually almost all referrals are secondary or tertiary referrals coming from the general clinics, emergency department, wards, and overseas. It has become apparent that the pattern, in particular, the incidence of neuro-ophthalmic diseases seen here were different from those described in standard textbooks. Thus, an accurate assessment of the workload seemed appropriate when an overseas fellow (KBR) was available to evaluate all the 57 patients seen by one consultant in the space of one five-day working week.

RESULTS
A total of 57 patients were seen in the neuroophthalmologic clinics during the five-day work week. Thirty-one percent (18) of these patients were new consultations while the remaining 61% (39) were followup visits. Fifty-two percent were females (30) with a mean age of 53 years while 47% were males (27) with a mean
age of 49 years. Nineteen cases involved disorders of the optic nerve, followed by disorders of ocular motility (11), then of the optic chiasm, visual pathways, and/or visual cortex (14). The remaining conditions were disorders of the orbit, facial nerve, pupil, and non specific visual disturbances (Table 1). Among the cases involving the optic nerve, 5 were ischemic optic neuropathy, followed by myopic tilted discs (3), and retrobulbar optic neuritis (3). The remainder included traumatic optic neuropathy (2), long-standing optic disc pallor (2), glaucomatous optic neuropathy (2), anterior optic neuritis probably due to multiple sclerosis
(1), and ethambutol toxicity (1) (Table 2). In respect to disorders of ocular motility, ocular myasthenia gravis (5) was the most common condition seen, followed by ischemic sixth-nerve palsy (3), and one case each of congenital esotropia, ischemic third-nerve and fourth-nerve palsy (Table 3). 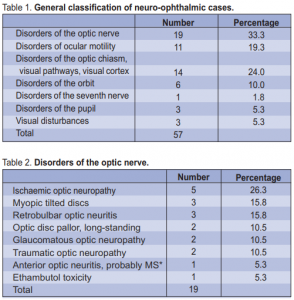 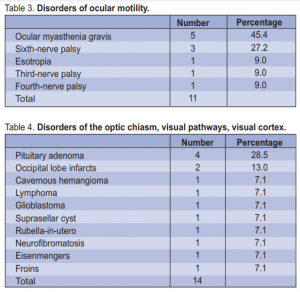 Pituitary adenomas (4) comprised the bulk of the disorders of the optic chiasm and/or visual pathways,
followed by occipital lobe infarcts (2) (Table 4). Five out of the six orbital cases referred to the neuroophthalmology clinic were for evaluation of a possible carotico-cavernous fistula (CCSF), but in only 2 cases was this diagnosis confirmed. The remaining orbital case had thyroid eye disease (Table 5).
In addition there was one case of hemifacial spasm seen, two cases of physiologic anisocoria, one case of HolmesAdie’s pupil, and three patients with indeterminate visual disturbances, one most likely a functional visual loss, the others being cases of migraine (Tables 6 to 8).

In a 2004 report on the incidence of new neuroophthalmologic diseases seen in Singapore, ischemic sixthnerve palsy and ischemic optic neuropathy were the two most common etiologies.1 In this currently observed fiveday neuro-ophthalmic clinic the majority of neuroophthalmic cases were ischemic optic neuropathies,
followed closely by ocular myasthenia gravis and pituitary adenoma. Thus, ischemia is the most common etiology in our neuro-ophthalmologic patients, associated with diabetes, hypertension, and hyperlipidemia, and not infrequently a combination of these. Ocular myasthenia was another common problem seen
in the clinic. In a 2003 comprehensive report on myasthenia gravis (MG) in Singapore, the incidence of ocular myasthenia gravis was noted to be high in this region, especially among ethnic Chinese patients2 and
progression to generalized MG was infrequent. Of the 5 cases of ocular myasthenia seen during the week, 3 were Chinese and 2 were Malay. In a report on symptomatic central nervous system (CNS) tumors in Singapore from 2000, majority of the new cases were meningiomas,3 but in our five-day neuroophthamology clinic, no cases were seen. The second largest reported group of intracranial tumors was pituitary adenomas.3 Four such cases were seen by us, 2 being

prolactinomas which comprised 30% of pituitary adenomas.4 The remaining 43 neuro-ophthalmologic cases were evenly distributed (Tables 2 to 8). A very rare case diagnosed in the clinic was Froin’s syndrome—a disease where the cerebrospinal fluid (CSF) is characterized by xanthrochromia and hypercoagulability associated with spinal meningeal inflammation. This case is rare; to the authors’ knowledge the only comprehensive published report on this disease was way back in 1921.5 Overall, during this five-day neuro-ophthalmologic clinic, majority of cases were ischemic in nature, reminding readers that systemic diseases like hypertension, diabetes mellitus, hyperlipidemia commonly manifest in the eye. Hence, better systemic control of these diseases is warranted.