THE call-center or contact-center business is the fastest growing industry in the Philippines, with an annual growth rate of 100 percent since 2000 and revenues of $2.54 billion as of 2006. In 2000, there were less than 1,000 callcenter seats in the country. The number rose to 40,000 seats in 20042 and 129,000 in 2008.3 Low labor costs and a highly skilled, English-speaking, talent pool have made the Philippines highly competitive in the business-process-outsourcing industry. In 2006, the Philippines ranked next only to India,2 with 20-percent share of global call-center services.1 The sector accounted for 12 percent of the country’s gross national product (GNP) and is one of the biggest providers of employment for Filipinos. On a typical workday, call-center agents spend 4 to 8 hours in front of a computer monitor or video-display terminal (VDT). They are typically assigned in graveyard shifts to coincide with the time zones in the countries of their employer’s clients. Vision and eye-related problems such as eye strain, tired eyes, irritation, redness, blurred and double vision are common among computer users. These are collectively referred to as computer-vision syndrome (CVS), defined by the American Optometric Association as a complex of eye and vision problems related to the activities that stress the near vision and are experienced in relation to or during computer use.4 A study found that complaints of dry eye, eye strain, eye pain, headache, and blurring of vision were common among computer users who had to look at the computer screen for more than six hours per day.5 VDT operators who worked on a computer for about 5 hours a day for an average of about 5 years reported a variety of visual symptoms, the most common of which were eye strain (65 percent) and headaches (42 percent).6 Base on a database search where causes of eye complaints in the office environment were assessed, it was concluded that alteration of the precorneal tear film (PTF) led to eye complaints that may be caused by thermal factors (low relative humidity, high room temperature); demanding task content (attention decreases blinking and widens the exposed ocular surface area); and individual characteristics (tear film alterations, blinking anomalies,
gland dysfunctions, and use of contact lenses). These factors progressively increase water evaporation and faster thinning of the PTF that causes dryness of the cornea, followed by corneal and conjunctival epithelial alterations and eye complaints.7 Our extensive review of available literature found no published reports on the prevalence of eye-related complaints in the call-center environment. The available related literature were limited to studies whose subjects had prolonged duration of exposure to a computer monitor in an office environment, with no description of the working conditions, or whose subjects had beenoperating VDT. No reports have also been published regarding the total number and demographics of callcenter agents in the Philippines. This is mainly due to the industry being relatively new, the industry’s rapid growth, and the high turnover rate of call-center agents. In addition, no reports have been published regarding occupational hazards in the call-center setting. The  working conditions of call centers in the Philippines have yet to be regulated. For example, different types of air conditioning units are being used by different call centers. Some centers have centralized air-conditioning units while others utilize a split-type, stand-up type, window-type, or a combination of these units. Electric fans are also being utilized to complement the air-conditioning units. The
different types of units being used to control the climate in call centers differ in terms of the amount of humidity and air they produce. How they affect the pre-corneal tear film is yet to be determined. Without any existing data on the prevalence of health-related problems in this setting, it would be difficult to formulate specific regulations. This study provided the prevalence of eye-related complaints among call-center agents in Metro Manila, and determined their diurnal or temporal occurrence, duration, and severity. The study also determined the relationship between duration of computer use and the duration of employment to the severity of the eye-related complaints.

METHODOLOGY
From August to October 2008, a survey was conducted among call-center agents employed in a call center in
Ortigas Center, Pasig City using a self-administered questionnaire. The call center houses 270 terminals and
employed over 300 agents working in shifts 24 hours a day, seven days a week. It has been in operation for 5 years handling inbound and outbound domestic and international calls. All call-center agents employed were invited to participate; those that refused were excluded from the survey. All participants were oriented on how to answer the questionnaire by means of an instruction sheet and the symptoms were defined. The questionnaire, consisting of 46 questions in English, was patterned after a dry-eye questionnaire developed in Indiana University in 1999 to assess ocular surface symptoms in mild to moderate dry-eye patients.8 The questionnaire utilized categorical scales to measure the prevalence, frequency, diurnal occurrence, duration, and intrusiveness of common ocular-surface symptoms.

Based on previous studies on computer-vision syndrome in VDT operators, the symptoms included in this study

were dryness of eyes, eye strain or tiredness of eyes, blurring of vision, doubling of vision, headache, eye pain,
eye redness, watery eyes, slow focusing from near to distance or vice versa. Data on age, gender, educational attainment, duration of employment, duration of computer use, use of corrective lenses, use of ocular medications, and previous diagnosis of any eye disease were also obtained. Descriptive statistics, measures of frequencies and percentages were derived for demographic characteristics. Cramer’s V coefficient was calculated to detect relationship between variables. All tests were twotailed, and p values <0.05 were considered significant. Statistical analyses were performed using SPSS (Statistical Package for Social Sciences) for Windows version 16.0. 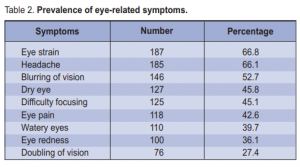 Rating the severity of the ocular complaints on a scale from 0 to 5 (0 for “not at all bothered” and 5 for “extremely bothered”), headache had the highest mean of 2.31 ± 1.24 followed by eye pain (2.17 ± 1.26), and eye redness and difficulty focusing from near to distance or vice versa (1.82
± 1.31) (Table 5). The duration of computer use was very strongly correlated with the severity of eye strain, doubling of 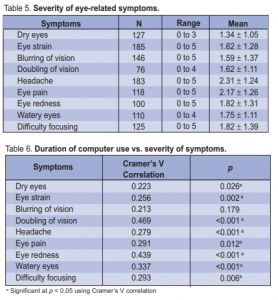 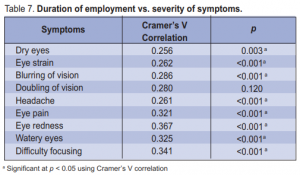 vision, headache, eye pain, eye redness, watery eyes, and difficulty focusing from near to distance or vice versa; while dryness of eyes was strongly correlated. It was not significantly correlated with the severity of blurring of
vision (Table 6). The duration of employment was very strongly correlated with all the symptoms except for
doubling of vision (Table 7). A coefficient of 0.25 or higher was considered a very strong correlation, 0.15 to 0.24 as strong, 0.11 to 0.14 as moderate, and 0.06 to 0.09 as weak.

DISCUSSION
Eye strain or tiredness of eyes, headache, and blurring of vision were the top complaints that the call center agents were experiencing. This was consistent with the most common ocular symptoms reported in a demographic analysis of VDT operators who worked on a computer for about 5 hours a day where the two most common ocular symptoms were eye strain and headache.6 Half of the respondents started their shifts between 10 A.M. and 6 P.M., which may explain why the majority of the respondents started to experience the ocular symptoms from 2 P.M. to 6 P.M., as they had been working in front of the computer monitor for at least 4 hours. The call-center agents were allowed a one-hour break and two 15-minute breaks. A study on VDT operators who worked 6 hours a day in front of a computer found that frequent breaks from monitor work reduced eye-related symptoms.9 Regular short breaks relieve the eyes from a stationary position which can lead to eye fatigue. The study also recommended looking out of the window at a distant object to help relieve accommodation. In a room without a view, looking at objects reflected in a mirror helps to alleviate eye strain because the viewing distance is doubled in a mirror. A similar recommendation is strongly suggested by the authors of this study for call-center agents. The specific processes that cause the ocular symptoms among call-center agents and computer users in general have yet to be understood. More work is needed to define
these processes and to develop effective preventive and treatment modalities. The data gathered in this survey
are limited to a set of respondents working under the same environmental conditions in a single call center. Further studies involving more respondents and other call centers that may have different environmental conditions and demographic characteristics are recommended. In conclusion, ocular symptoms were found to be prevalent among call-center agents in Metro Manila. The severity of the ocular symptoms experienced was found to be correlated with the duration of computer use and length of employment.

Acknowledgments
The authors thank the Sterling Global Call Center Inc. for giving the authors access to their employees during their hectic office hours; Michelle Bianca Lopez of Sterling Global Call Center, Inc., for her assistance; Lucien Lao for her assistance in the construction of the survey questionnaire; and Katherine Cristobal of the Clinical Information Services of St. Luke’s Medical Center for the statistical analysis.