Research grant was provided by the Research and Biotechnology Group.
Project No. 18 – 016

Disclosure: The authors have no proprietary or commercial interest in any materials discussed in this article.

Fundus fluorescein angiography (FFA) has been widely used since the 1960s for the evaluation of a wide array of retinal disorders. The contrast media used in this procedure is sodium fluorescein, a non-iodinated, orange-red crystalline hydrocarbon (C20H12O5Na) with an osmolality of 572 – 858 mOsm/ kg, which readily diffuses through most body fluids.1 The normal adult dose is 500 mg (100 mg/mL) via intravenous administration. It is primarily metabolized by the kidneys and is completely excreted through urine within 48 to 72 hours of administration.1

Unlike other iodinated contrast media, little is known on the effect of sodium fluorescein on the kidneys. There are currently no guidelines in the ophthalmology community on when to require measurement of renal function or who needs referral to a nephrologist for clearance prior to FFA. Common practice dictates the avoidance of FFA in patients with renal insufficiency based on published data showing nephrotoxic effects of iodinated contrast media.3-4 There is, however, inadequate data on CIN from FFA. As of this writing, only 4 published studies, with sample sizes ranging from 44 to 160, on the effect of FFA on renal function are known to the authors.5-8 Using SCr and estimated glomerular filtration rate (eGFR) as markers of renal function, 3 studies showed no significant effect of FFA on renal function.5-7 On the other hand, Alemzadeh-Ansari et al. noted elevation of SCr in 9 out of 44 (20%) of diabetic patients after FFA.8 The authors, however, did not specify if this increase in SCr was significant or not. Limited studies with conflicting results necessitate the need for a prospective study with a large cohort of patients to validate their findings.

Consecutive patients aged 18 years and above that required FFA at the Ophthalmology out-patient department were enrolled in the study. Patients were excluded if they (1) underwent a procedure using contrast media within 2 weeks from study entry, (2) were using nephrotoxic drugs such as nonsteroidal anti-inflammatory drugs, corticosteroids, angiotensin-converting enzyme inhibitors, and angiotensin receptor blockers within 2 weeks from study entry, or (3) were pregnant or lactating.

Sample size was calculated based on the incidence of CIN among patients undergoing FFA assumed to be 3.2%6-8, with a maximum allowable error of 2% and reliability of 80%. The computed sample size was 129 subjects.

After fulfilling the eligibility criteria, informed consent was obtained from the subjects. For each subject, serum samples for creatinine determination and complete blood count (CBC) were collected within 7 days before the scheduled fluorescein angiogram. Subjects with elevated baseline SCr levels were referred to the Nephrology service for clearance prior to FFA. Estimated glomerular filtration rate (eGFR) was determined using the Chronic Kidney Disease Epidemiology Collaboration (CKD-EPI) formula:

Enrolled subjects were classified according to baseline eGFR levels into low (eGRF ≥60 mL/min), intermediate (eGFR 30 – 59 mL/min), and high-risk (eGFR ≤29 mL/min) for developing CIN. We used eGFR in the stratification of our subjects for the risk of developing CIN because this renal marker, unlike SCr, accounts for other factors such as age, gender, and race. The authors used the Kidney Disease Improving Global Outcomes (KDIGO) guidelines for the classification of chronic kidney disease in the categorization of subjects into low, intermediate, and high-risk groups.3

Patient preparation prior to FFA included an (1) intradermal skin test to detect potential allergy to sodium fluorescein and (2) dilation of the pupils using 0.5% tropicamide + 0.5% henylephrine (Sanmyd-P®, Santen Philippines Inc., Metro Manila, Philippines) ophthalmic solution. Skin tests were evaluated 30 minutes following intradermal injection. Fluorescein angiography was deferred for subjects with a positive skin test, systolic BP of ≥160 mmHg or diastolic BP of ≥100 mmHg. All subjects for FFA received 5 mLof 500 mg sodium fluorescein (Alcon Laboratories, Fort Worth, Texas, USA) intravenously using a 25-gauge winged infusion set via a peripheral vein in 4 to 6 seconds followed by retinal photography using the Zeiss Visucam®NM/FA or Zeiss Visupac (Carl Zeiss Meditec AG, Germany) fundus cameras. After the FFA procedure, subjects were monitored for 30 minutes for adverse reactions. If an adverse event was noted, routine care according to existing guidelines was given to the subject. Serum creatinine and eGFR measurements were repeated 48 to 72 hours after FFA for each subject. Subjects who developed CIN after FFA were immediately referred to the Nephrology service for further evaluation and management.

Statistical analysis was performed using SPSS version 10. Numerical data were expressed as means and standard deviations (SDs). Categorical variables were expressed as frequency (n) and percentage (%). Incidence of CIN was determined by the total number of CIN cases divided by the total number of subjects who underwent FFA. Paired student’s t-test was used to compare SCr and eGFR before and after FFA for all subjects and among low, intermediate, and high-risk groups. Level of significance was set at α = 0.05.

A total of 159 subjects were enrolled from September 1, 2018 to August 31, 2019. However, only 144 patients were able to complete the study. FFA was deferred in 1 patient due to elevated blood pressure and in 3 patients who developed a positive reaction from the intradermal skin test prior to FFA. Ten (10) subjects were lost to follow-up.

The baseline characteristics of the subjects included in the study are shown in Table 1. Of the 144 subjects who completed the study, majority were females (73.6%) and were diabetics (72.9 %). Mean patient age was 61 years old (range: 19 to 88). Subjects who were already diagnosed with chronic kidney disease (CKD) comprised 11.8% of the study population. The most frequent ocular diagnoses were non-proliferative diabetic retinopathy (26.4%), proliferative diabetic retinopathy (25.0%), and agerelated macular degeneration (13.2%). According to  baseline eGFR levels, 57.6%, 32.6%, and 9.7% were classified into low-, intermediate-, and high-risk groups respectively. Fifty-seven (57 or 39.6%) patients who completed the study had elevated SCr at baseline.

Four (4 or 2.8%) patients, all with normal baseline SCr and were stratified as low-risks, developed CIN after FFA (Table 2). Three (3) out of the 4 patients were diabetic and 2 were hypertensive. Two (2) patients experienced nausea and vomiting afterundergoing the FFA procedure. All 4 subjects were advised to increase oral fluid intake and underwent repeat SCr determination after 7 days. Repeat SCr for all 4 patients who developed CIN went back to normal levels and no other treatment was given apart from oral hydration. No patient needed hospitalization or dialysis. 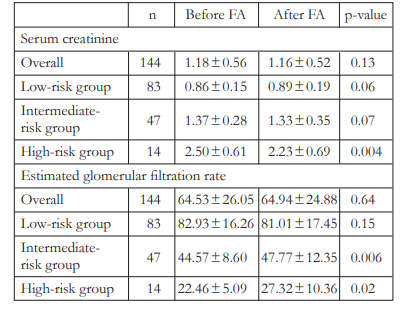 No serious adverse events were noted in the study. Thirteen (13 or 9.0%) patients noted nausea, 8 (5.6%) had pruritus, and 3 (2.1%) experienced vomiting after FFA (Table 5). All subjects were managed accordingly and were sent home on the same day. 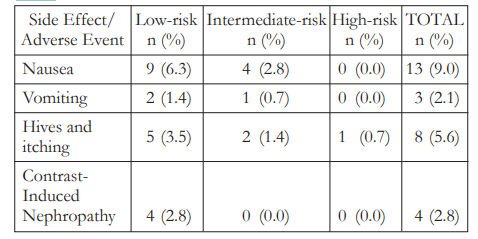 The incidence of CIN following FFA in this study (2.8%) was slightly higher compared to the retrospective studies of Lee et al. (1.3%)6 and Almalki et al. (1%).7 Differences in baseline
characteristics of the study populations and methodologies used such as the concentration of sodium fluorescein may account for the slight difference in incidence of CIN from these
studies. The mean age of the subjects in our study was 61 years compared to 52 years and 56 years in the studies of Lee et al. and Almalki et al. respectively.6-7 Some studies have identified advanced age as an independent risk factor for CIN following coronary angiography.23-24 Higher age is associated with deterioration of renal function leading to greater risk for CIN. Our study population also predominantly consisted of diabetics (72.9%) while that of Lee et al. only had 47.5% of their subjects who were diabetics.6 Although there is no conclusive evidence that the presence of diabetes mellitus (DM) with normal renal function is associated with CIN, several studies have identified DM as an independent risk factor for CIN.23,25-26 The presence of DM alone may predispose an individual to higher risk for CIN may be due to early renal deterioration from DM nephropathy that is not yet detected by serum creatinine. On the other hand, while all of Almalkis’ subjects were diabetics, they only used half of the recommended concentration of sodium fluorescein.

Two of the 3 subjects who had vomiting after FFA eventually developed CIN. Vomiting is a known side-effect of the procedure but it usually occurs in a very small proportion (0.3 – 0.4%) of patients. This side effect may have caused significant gastrointestinal losses and subsequent dehydration of subjects that led to increase in SCr. This study, however, is not powered to determine if the occurrence of vomiting is truly an independent risk factor for the development of CIN.

There was no significant worsening of acute renal function based on SCr and eGFR after FFA. The results support the findings of Kameda et al., Lee et al., and Almalki et al. who also used SCr
and eGFR to assess renal function before and after FFA.5-7 An unexpected outcome was that SCr and eGFR levels actually significantly improved after FFA in the high-risk. A similar finding was seen by Lee et al. who classified subjects as high-risk based on their baseline SCr (>2.0 mg/dL).6 As mentioned earlier, a plausible explanation to this is that patients at higher risks may have a conscious effort to hydrate themselves more compared with patients with lower risk.

The limitation of this study is that it is not powered to identify which factors are associated with CIN from FFA. Based on our results, baseline serum creatinine may not be a good predictor of the development of CIN post-FFA since all 4 subjects who developed CIN in this study presented with normal SCr at baseline. Further studies with a larger cohort of subjects to address this issue are recommended.

The incidence of contrast-induced nephropathy among patients undergoing fundus fluorescein angiography in our cohort is 2.8%. All subjects who developed CIN exhibited normal serum creatinine levels within 7 days without the need for hospitalization or dialysis. Prolonged or serious worsening of renal function, as measured by serum creatinine and estimated glomerular filtration rate before and after fundus fluorescein angiography, was not noted in all subjects in our study, including those classified as intermediate- and high-risk for developing contrast-induced nephropathy.