TOXOCARA keratitis is one of the many presentations of ocular toxocariasis. It results from invasion of the eye by the roundworm toxocara canis, a parasite that completes its life cycle in dogs and other canids, via the hematogenous route. Only 2 cases of toxocara keratitis have been reported. Baldone and colleagues reported the presence of a nematode larva with the morphological appearance of toxocara in the corneal stroma. However, no histopathologic examination was done because the larva was moving too swiftly to be surgically removed. The second case was the only one in a study by J. Altcheh et a l . of 54 toxocariasis cases confirmed by enzyme immunoassay (ELISA). We present the case of a 50-year-old male who had a 10-month history of eye redness, pain, blurring of vision, foreign-body sensation, tearing, photophobia, and corneal opacity in the right eye, also observed later in the left eye. There was no history of previous eye disease, surgery, or trauma. The patient had consulted several ophthalmologists, but chronic treatment with topical corticosteroids did not resolve the problem. Visual acuity was 6/21 improved to 6/7.5 in the left eye (OS) and counting fingers (CF) in the right eye (OD). There was moderate congestion in OD with white centralcorneal-stromal infiltrates, indistinct borders, and stromal edema. Severe congestion was present in OS with central multifocal to confluent stromal infiltrates, indistinct borders, stromal edema, and superior micropannus. No other abnormalities were seen. Corneal sensation was intact in both eyes (OU). Systemic physical examination was normal except for slightly distant breath sounds in the left hemithorax, consistent with pulmonary tuberculosis. Initial assessment was central stromal keratitis OU. Differential diagnoses include herpes simplex/herpes zoster virus, Epstein-Barr virus, stromal keratitis, and Padi keratitis, which were not primary considerations in this case because these conditions respond well to topical corticosteroids. Moreover, they usually present with nummular or disciform stromal edema, with or without keratic precipitates, and rarely cause infiltration of the corneal stroma. Fungi can cause chronic corneal stromal disease but would worsen with steroid treatment, leading to corneal necrosis and rupture. Interstitial keratitis due to tuberculosis or syphilis, would have responded to steroids, but both conditions have a propensity for deep corneal-stromal neovascularization, which was not seen in this case. Corneal infections secondary to atypical mycobacteria other than TB are usually seen as wound infections after ocular surgery or trauma, which was not present in this patient. The patient was initially treated as a rare bilateral acanthamoeba keratitis. Work-up included Gram’s and Geimsa staining, bacterial and fungal cultures of corneal s c r a p i n g s, and corneal biopsy, which showed no remarkable findings. The patient was placed on the following regimen in OU: ketorolac (Acular, Allergan, Waco, TX, USA) every hour, atropine sulfate (Isopto Atropine, Alcon-Couvreur, Puurs, Belgium) TID, and ciprofloxacin (Ciloxan, AlconCouvreur, Puurs, Belgium) QID. After one month of treatment, OS worsened and developed a large epithelial defect with dense infiltrates. After 2 months, the left cornea showed signs of necrosis, melting, and eventual desmetocoele formation. An autoimmune etiology was considered. Additional work-up included antinuclear antibody, erythrocyte sedimentation rate, complete blood chemistry, and VDRL (Venereal Disease Research Laboratory) test, which were all within normal values. Chest X-ray showed findings consistent with pulmonary tuberculosis (PTB). Oral prednisone 60 mg per day was started, but was later discontinued with resultant increased inflammation in OD. Stromal infiltrates increased and hypopyon developed. Anterior-chamber tap showed marked eosinophila. Optical penetrating keratoplasty (PKP) was done for OS. Histopathology of the corneal button revealed a cavity lined with membranous material in the midstroma, containing an immature Toxocara sp. (Figure 1). 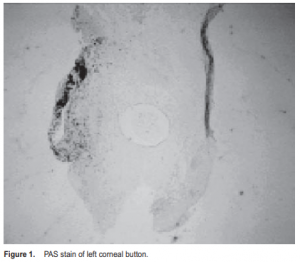 Stool examination showed brown, for med ascaris and hookworms. Patient was started on mebendazole (Antiox, Janssen, Beersem Belgium) 250 mg BID for 5 days. Inflammation in OS resolved after PKP. Progressive cataract developed after two months and that eye under went extracapsular cataract extraction with posterior-chamber lens implantation with postoperative visual acuity (VA) of 6/12, improved to 6/7.5. The right eye also had PKP with postoperative VA of 6/ 15 improved to 6/9 with pinhole. There was mild nuclear sclerosis. Chronic contact with dogs has been implicated in toxocariasis. J Altcheh et al. showed that in 54 patients who tested positive for toxocariasis based on ELISA, 92.6% had exposure to dogs for less than 6 months, 67% had a history of geophagia, 67% lacked basic hygiene, and 13% had a history of onychophagia.

This patient reported keeping dogs at home and eating cooked dog meat. Toxocariasis is caused by ingestion of toxocara eggs. After ingestion, the third-stage larvae are released, penetrate the small intestines, and reach the liver via the portal circulation. The larvae may gain access to the eye via choroidal, ciliary, and central retinal arteries. In the cornea, the larvae may elicit an immune response, resulting in migration of neutrophils and eosinophils from limbal vessels. These eventually invade the corneal stroma with disruption of corneal clarity.  A definitive diagnosis is dependent on the detection of toxocara larvae in tissue sections. In this case, a section of the nematode was found in several slides. ELISA is the most definitive serologic test for the detection of toxocara infection. Pollard et al. showed a specificity of 91% and sensitivity of 90% in 41 patients. Shields showed 82% sensitivity and 100% specificity in 22 patients. The treatment for toxocara keratitis has not been reported. This case illustrates that penetrating keratoplasty may be effective since it removes the inflammatory foci from the body. Prevention is still the key. This may be done by frequent handwashing and avoiding ingestion of or contact with eggs or larvae. It is also advised that dogs be treated with antihelminthics.