A comparative study between the Schwind and Zyoptix XP microkeratomes

LASER in situ keratomileusis (LASIK) is a widely accepted procedure in managing refractive errors. However, laser correction is limited by the patient’s corneal thickness. The need to deliver correction for higher errors
of refraction without compromising corneal strength has paved the way for newer-generation microkeratomes and other technologies that create thinner flaps making more corneal tissue available for correction.1
There are different microkeratomes in use today. The main differences lie in the type of movement (straight, pivoting, or pendular), applanation of the cornea during cut(convex or planar), and position of the hinge (superior or nasal). The Schwind Carriazo-Pendular (CP) microkeratome is pendular with convex applanation. It produces a superior hinge. This convex applanation provides a nearly constant pressure on the cornea during the cutting process, producing almost uniform thickness throughout the flap area. The constant pressure applied by the CP is presumed to lower the risk of buttonhole compared with planar applanation microkeratomes in which the central pressure is higher than the peripheral.2 The Zyoptix XP (XP) is a pivot microkeratome with planar applanation. It produces a meniscus-formed flap, which is thinner in the center and thicker in the periphery. The keratome cuts in a constant plane, which produces a smoother corneal bed, thus also suggesting less chance of a buttonhole.3-4 Evaluating flap thickness and quality created by different keratomes is important. With an instrument that offers greater predictability in flap thickness, the surgeon
can reasonably estimate residual bed thickness and avoid ectasia.5 The shearing force due to differences in keratome movement and bed contour may affect visual results and induce unwanted aberrations.6-7 Flap complications such as buttonholes, displacement, and striae may occur with overly thin, friable flaps.8
This study compared the differences in outcomes (flapthickness reproducibility, vision, contrast sensitivity, and
higher-order aberrations) of LASIK between Schwind CP microkeratome and Zyoptix XP microkeratome.

METHODOLOGY
This is a prospective, randomized, subject-masked, comparative clinical study of 32 eyes of 16 patients seen
in a single center from July 2008 to February 2009. The research protocol followed the guidelines of the
Helsinki Declaration and was approved by the hospital’s ethics review board. All patients were fully informed of
the nature and details of the procedure. The scope of the study, including all the risks and benefits involved, were explained. Informed consent was obtained from all To be included, patients must:
• be at least 18 years old;
• have myopia with or without astigmatism in both eyes, but with stable refraction;
• have stopped using soft contact lenses for at least 1 week or hard contact lens for at least 3 weeks;
• have estimated residual corneal-bed thickness of 280 µm and above;
• be willing to undergo LASIK in both eyes. Excluded were patients who:
• have preexisting systemic diseases that could hinder wound healing;
• are pregnant or lactating;
• have active ocular inflammation and infection;
• have a history of herpes simplex or herpes zoster keratitis;
• have signs of corneal pathologies, corneal warpage on topography;
• have unstable refraction;
• have had previous eye surgeries or eye trauma;
• have cataract, glaucoma, or other optic-nerve diseases;
• have retina pathologies;
• will undergo PRK or LASEK.

All patients underwent refractive-screening protocol which included history taking, visual-acuity measurements, manifest and cycloplegic refractions, dim-light pupil-size determination, slitlamp examination, intraocular pressure check, ultrasonic pachymetry, Schirmer’s testing, corneal topography using Orbscan IIz, Zywave undilated and dilated wavefront aberrometry measurements, and dilated-fundus examination.
All laser treatments for each eye were targeted for emmetropia using the personalized-treatment software
planner (Bausch & Lomb, Rochester, NY, USA). The surgeries were performed by a single surgeon. The right
eye was treated first. A randomization table was used to determine which eye would undergo flap creation using either CP microkeratome or XP microkeratome. The patients were blinded as to the type of microkeratome. On the operative eye, asepsis and antisepsis technique with 10% betadine was applied around the lid and periorbital adnexa, followed by sterile draping of the eye and placement of the lid speculum. Pachymetry was done on the central cornea before placement of keratome. Flaps were created using either the CP or the XP microkeratome based on the randomization table. The flaps were lifted and pachymetry measurements were done on the dry stromal bed. The pachymeter automatically took 25 readings and the mean reading was recorded. To obtain the flap thickness per eye, the stromal-bed-thickness measurement was subtracted from the corneal thickness prior to flap cutting. Laser ablation was performed using the Technolas 217z and the flap repositioned by floating and then dried. 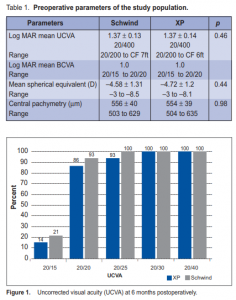 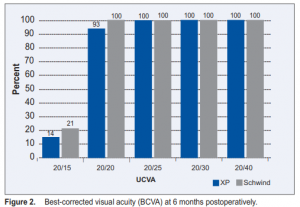 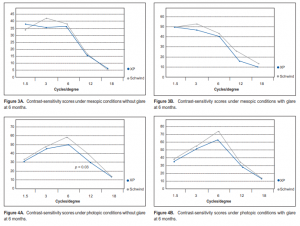 DISCUSSION
This prospective study compared contralateral eyes of the same patient that were randomized to receive flaps
created either by a CP or an XP microkeratome during a wavefront-guided LASIK treatment for myopia or astigmatic myopia. Our data showed that the mean flap thickness (97 ± 13 µm) created by the Schwind
microkeratome was thinner than the labeled predicted thickness (110 µm). In contrast, the mean flap thickness (146 ± 27 µm) created with the XP microkeratome was thicker than predicted (120 µm). These differences were
statistically significant. Thinner flaps have the advantage of preserving more untreated cornea; hence, the biomechanical integrity is less altered.5, 9 Thicker flaps may inadvertently increase risks of ectasia if the residual stroma is less than what the surgeon estimated it would be. On the other hand, studies also reported that thinner flaps were more difficult to manage and had greater tendency to develop flap striae, displacement, and irregular astigmatism.8, 10 The results of this study are consistent with these reports since only the thinner flaps in the CP group had flap problems. Despite the complications encountered, they did not affect visual outcomes in the CP group. The difference in flap thickness did not seem to affect visual outcome. There were no statistical differences in the UCVA, BCVA, and contrast sensitivity in both groups. In this study, the flap thickness exhibited an impact on the postoperative spherical aberration. Six months postoperatively, eyes with flaps created using the Schwind microkeratome had smaller mean change in spherical aberration. Spherical aberration, which is symmetrical to the visual axis of the eye, has been found to be substantially
increased after LASIK.7, 11-12 It is hypothesized that flap thickness bears impact on the spherical aberration.
Suggested sources of induced spherical aberration after LASIK included biomechanical responses and epithelialthickness modulation during the wound-healing process. In our study, it was difficult to determine the exact cause of the difference in spherical aberration. Our data seemed to suggest that the thinner flaps created by the CP may be the only identifiable difference and, therefore, the most likely contributing factor.
In summary, CP-created flaps were thinner and showed more predictability than the XP, but they resulted in more complications. Total higher-order aberration was similar in both groups, but spherical aberration was increased in the XP group. Despite these differences, the vision and refractive results were similar for both groups. We conclude that flap quality and thickness may affect flap handling and lead to complications, but have little or no effect on visual outcome. We recommend that future studies should involve larger sample size and comparison of other mechanical microkeratomes or femtosecond lasers to determine if flap quality and thickness do play a role in visual outcome.