A case of intracranial chordoma associated with multiple-cranial-nerve palsy

CHORDOMAS are rare neoplasms that constitute only 0.2% of central-nervous-system (CNS) tumors. The most common site is the sacrococcygeal region (50%), followed by the intracranial region (30%). 1 We report a case of an intracranial chordoma presenting with diplopia and describe its response to treatment. A 77-year-old man was referred to the clinic complaining of diplopia. On examination, a left-sixth-nerve palsy was noted. Magnetic-resonance imaging (MRI) revealed an expanding sellar mass consistent with a pituitary tumor (Figure 1). 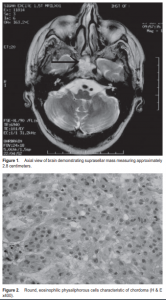 Surgical decompression was performed, with complete resolution of the diplopia. Complete resection, however, was not possible. Histological studies showed an intracranial chordoma (Figure 2). Three months following surgery, the patient returned with diplopia and right ptosis. He was noted to have a right-third-nerve palsy. Repeat MRI showed recurrence of the tumor. The patient was referred for radiotherapy but standard external-beam radiotherapy was not considered of value as the tumor was situated deep in the cranium. Targeted proton-beam-charged-particle therapy was performed instead at a center in Paris. Only a few centers worldwide offer this procedure. The first cycle of radiotherapy consisted of a total dose of 45 Gy in 25 fractions using metavoltage X-rays over one week. The second cycle was completed in 10 days providing another 26 Gy equivalent using high-energy protons. Following this treatment, there was significant improvement in the patient’s ocular motility and resolution of ptosis. Chordomas were first described by Virchow (1857) 1 and initially believed to be cartilaginous in origin. Ribbert (1895) 1 demonstrated similar tumors in the nucleus pulposis of one patient and correctly defined their origin from the notochord. Although distant metastasis has been reported, 1 the usual presentation is of a slowly growing but locally aggressive tumor. The most common sites of involvement are the sacrum, intracranially at the clivus, and along spinal axes. Chordomas vary in size, have a soft to gelatinous consistency, and are grey-white on the outer surface. Chordomas have been divided into 3 subtypes—conventional, chondroid, and differentiated—based on morphology and light microscopy. The chondroidal variety is predominantly located intracranially and tends to be slower growing than the conventional type. The chondroidal variety exhibit foci of chondroid (cartilaginous and bony) differentiation adjacent to areas of conventional chordoma.  In the chondroid areas, physaliphorous cells lie within lacunae surrounded by cartilaginous stroma. The chondroidal variety shares ultra structural features with both chordomas and cartilaginous tumors. From a review of previously reported cases, chordomas present at ages between 27 and 80 years. 3 The average age of presentation was 38 years  when situated in the sphenooccipital region and 56 years 1 when situated in spinal area. Chordomas arise from notochord remnants, which are most commonly present as the nucleus pulposis in the intervertebral discs. However, extradural remnants can be present anywhere along the axial skeleton, which can result in the distribution of the tumor in different areas. Ocular presentations for intracranial lesions include diplopia (70%), visual loss (16%), blepharoptosis (8%), and visual-field loss (3%). 3 Early involvement of the sixth cranial nerve seems to be the most common finding in patients presenting with ocular motility disorders. The Mayo Clinic series on intracranial chordomas (1932 to 1978) comments on a tendency of left-sided cranial-nerve involvement. 3 Radical resections of tumors with clean margins are associated with a longer disease-free interval. If subtotal excision is the only option, the addition of radiation therapy can lengthen the interval to recurrence. Chemotherapy has not been shown to be effective. 1

Acknowledgment
The authors thank Prof. R. Rampling, Dr. Ewan G. Kemp, and Dr. Daniel Chui for their assistance in the preparation of this paper.