The Philippine Eye Research Institute at 50

The Philippine Eye Research Institute (PERI), established in 1965 under Republic Act No. 4593, is envisioned to be the center of ophthalmic research activities and repository of recorded ophthalmic literature and information on eye researches in the country. Its mission, to prevent blindness among Filipinos, is achieved through many of its research programs; such as clinical collaboration with the University of the Philippines (UP) – Philippine General Hospital (PGH) Department of Ophthalmology and Visual Sciences, translational researches, epi-demiologic and public health programs, and experimental and basic researches.

As the premiere eye research institute of the country, it was mandated by law to: 1) undertake clinical, applied, and epidemiological researches on eye diseases; 2) conduct basic studies on different eye diseases; 3) perform the research functions of the UP Department of Ophthalmology; 4) collaborate with scientific researchers in other fields of medicine; 5) provide stimulation and assistance to other ophthalmic researchers in the country; 6) cooperate with scientific research activities here and abroad; and 7) formulate plans, activities, or proposals and recommend policies, procedures, rules, and regulations for adoption by the Board of Regents consistent with its powers and effective operation. 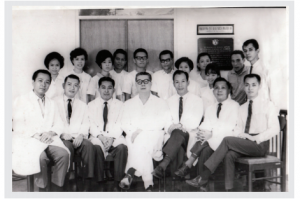 The history of the PERI began as a bill drafted by then University Counsel Atty. Perfecto Fernandez in February 1965, and was supported by UP President Carlos P. Romulo. Endorsed as House Bill No. 15085 by House Speaker Cornelio Villareal and Senate President Ferdinand Marcos, it was signed by the President of the Republic of the Philippines as RA 4593 in June 19, 1965. Dr. Geminiano de Ocampo was appointed by the UP Board of Regents to become the institute’s first director in October of the same year, and the PERI started as a one-room laboratory in Ward 4 of PGH. Initially, it had five laboratories for different sections of the institute; namely, ophthalmic pathology, experimental ocular surgery, clinical research, microbiology laboratory, and photography.

In 1966, a 5-year development plan was formulated and implemented for the institute, prioritizing the expansion of its physical plant and extending laboratories, and facilitating its research programs. The two-storey annex in front of Ward 3 of PGH was built. With its upgraded facilities and acquired equipments, including the first argon laser in the Philippines from the National Science and Development Board, the institute was able to conduct more researches that addressed its agenda. Likewise, both administrative and research personnel of the institute increased by the end of 1971 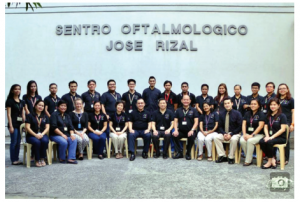 In 1978, under the second term of the directorship of Dr. Salvador R. Salceda, the PERI was renamed to Institute of Ophthalmology (IO) to accompany the broadening of its function which included tertiary ophthalmological patient care and post-eye residency training for physicians

In 1979, the institute, designated to take the lead role in planning and formulating eye-health policies, formulated and published the National Sight Plan in cooperation with other non-government organizations. It joined the worldwide initiative and interest on blindness prevention by developing the program on Preventive/Public Health Ophthalmology and Primary Eye Care. Dr. Salceda became a member of the International Agency for the Prevention of Blindness and of the World Health Organization (WHO) Advisory Group on the Prevention of Blindness

When the PGH was renovated in 1985, the Department of Ophthalmology was transferred to Ward 12, and the institute was moved as well. Funds were raised to allow the laboratories to function and research studies to flourish. The institute built partnership with both local and international agencies, including the Rockefeller Foundation, the Philippine Charity Sweepstakes Office, IMPACT UK and Philippines, the Harvard University, and the Singapore Research Eye Institute.

In 1988, the Board of Regents decided to revert the institute back to its original mission of being the national center for ophthalmic research through clinical, applied, and epidemiological researches to delineate its functions from those of the Department of Ophthalmology.

Dr. Rosie R. Noche succeeded Dr. Salceda as director of the institute in 1998. Under her leadership, the institute continued its mission towards systematic researches in ophthalmology. Its staff contributed to hundreds of scientific journals and published several books and monographs on eye diseases, worked to successfully formulate the National Program for the Prevention of Blindness, and continued to form linkages to address existing issues in ophthalmic health.

Succeeding Dr. Noche was Dr. Manuel B. Agulto. During his term, a Unified Research Agenda in Ophthalmology was formulated for the institute and the department. Researchers and consultants from both institutions worked hand in hand to develop researches in ophthalmology. It was under his directorship that the institute was transferred in 2005 to its present home in a 500-square meter facility beside the Department of Ophthalmology and Visual Sciences (DOVS) at the Sentro Oftalmologico Jose Rizal (SOJR). The building was a joint project of the Republic of the Philippines through the UP and the Agencia Española de Cooperacion Internacional (AECI).

Dr. Leo D.P. Cubillan is currently the director of the institute. During his term, he reverted back the name of the institute to PERI to regain its autonomy, to be consistent with its mandate, and to be aligned with its current mission and vision. The institute still works in partnership with various ophthalmic health institutions, both public and private, locally and internationally.

PERI continues to envision preventing blindness among Filipinos through research. It serves its mission to be the leading institution for ophthalmic research and development by providing research support facilities, initiating population-based studies, formulating national policies, and providing direction, inspiration, and training in order to ultimately improve the national state of ophthalmic health.

Among its research projects is the Philippine Eye Disease Study, an epidemiologic research that aims to know the prevalence of the most common eye diseases of the country. In collaboration with the Department of Health, it will be conducted in all 17 regions of the country and will be launched in 2015 as one of the activities of PERI’s golden anniversary.

The Vision Screening Policy among Preschool Children is currently being deliberated in the 16th Congress of the House of Representatives. It aims to mandate a vision screening program among the kindergarten pupils of all public and private schools in the country to be able to identify those who have problems with vision, such as amblyopia or “lazy eye”, which can be best treated before the age of 7 to prevent blindness as the child grows older. The Vision Screening Kit developed by PERI, a kit composed of the LEA chart, training manuals, occluders, and other paraphernalia for screening, is also available at the institute. In collaboration with the Department of Health and Department of Education, PERI provides services for training teachers and nurses of schools to capacitate them to train vision screeners who can 56 Philippine Academy of Ophthalmology the expansion of laboratories and facilities, the PERI, celebrating its 50th anniversary in June 2015, continues to open its doors for research collaboration and partnership towards universal eye health. conduct the activity. The PERI vision screening team has conducted several trainings for trainers in several locations, such as the 2nd District of Ilocos, Nueva Ecija, and Metro Manila.

The institute has also created networks with international universities to promote professional growth among its staff. A memorandum of agreement between the University of Houston and UP allows PERI researchers to enroll to a PhD program in Houston, Texas and work in the institute after completing the program. The Harvard Medical School in partnership with the Joslin Diabetes Center has collaborated with the institute to establish the first Teleophthalmology Retina Reading Center in the Philippines. This program aims to provide diagnostic services in terms of fluorescent angiography and optical coherence tomography of the retina.

PERI conducts researches on various areas, led by its own researchers and research associates, in collaboration with the Department of Ophthalmology and Visual Sciences and other departments in PGH. It plays a significant role in providing consultation for many studies that are related to eye health

It has also conducted studies in collaboration with the WHO in the past 2 years, including situational analyses of certain visual concerns, such as retinopathy of prematurity, age-related blindness, and diabetes and diabetic retinopathy. In March 2014, PERI was the site for a week-long training workshop for health personnel that will conduct the Rapid Assessment of Avoidable Blindness (RAAB) surveys. The workshop was hosted by the WHO and funded by the Australian Aid, International Agency of Blindness Prevention, and the Fred Hollows Foundation. It was attended by 13 participants from 9 different countries.

Its present laboratories not only take part in clinical trials and experimental studies but also provide diagnostic services for the patients of the SOJR. It is currently undergoing the accreditation of the College of American Pathologists, a medical society known as the leader in laboratory quality assurance.

The PERI is the only ophthalmic research institution in the country with an excellent personnel complement. A new National Institutes of Health building, which will be constructed in the next few years, will become the new home of the institute. With the increase in the number of administrative staff and researchers of various expertise, and with the expansion of laboratories and facilities, the PERI, celebrating its 50th anniversary in June 2015, continues to open its doors for research collaboration and partnership towards universal eye health.