Disclosure: The authors do not have any financial disclosures or conflicts of interest. The study received financial support from The Medical City Clinical and Translational Research Institute.

Intraocular pressure (IOP) is one of the important risk factors in developing glaucoma. As the second most common cause of blindness worldwide, this disease entity is characterized by the presence of optic neuropathy and concurrent visual field loss, subsequent to changing and persistently elevated IOPs that are measured with the use of an applanation tonometer.1,2 The Goldmann applanation tonometer (GAT) is currently the gold standard in measuring IOP and its accuracy is influenced by several factors, including corneal thickness, systemic and ocular conditions, breath holding, and the amount of fluorescein dye, to name a few. It has also been shown that numerous modifiable factors and lifestyle activities may influence aqueous humor dynamics governing the IOP level of which some mechanisms have not yet been elucidated.

In a few studies, swimming goggles were identified to induce periocular pressure with prolonged wear and consequent increase in IOP of swimmers.3,4 Goenadi studied dive masks and found no significant increase in IOP after mask use; rather, a slight decrease was observed.5 Similarly, the N95 respirator mask, widely used during the Covid-19 pandemic, is expected to potentiate similar mechanisms and outcomes. Its prolonged use was hypothesized to cause physiological changes from induced hypoxia and hypercapnia, breathing resistance, and increased cardiopulmonary effort, putting healthcare workers at risk for IOP changes.6,7 Mekjavic also demonstrated that exercise-induced IOP elevation was exacerbated by hypercapnia.8 Due to inconclusive results and lack of evidence, further studies on respirator masks are needed to determine the physiologic burden during longer periods of use, such as during respiratory infectious outbreaks.

There are only few reports discussing the relationship of N95 mask use with IOP elevation. This study determined if there was a significant change in the IOP of healthcare workers with extended use of N95 masks.

This was a prospective time-series study of 2 intervention arms and a control group. Healthcare workers from a private institution, aged 18 years old and above, with normal baseline ocular examination and without history of any systemic or ocular diseases were recruited. Those with family history of glaucoma, history of previous eye surgery and contact lens use, and who failed the mask-fit tests were excluded. Informed consent was obtained from each study participant.

Sample size was computed based on a priori computation, with alpha value set at 0.05, magnitude of the effect size assumed at 0.25, power of at least 0.95, and with number of grouping variables set at 3 and measurements at 4; total sample size calculated was 171 or 57 individual respondents per group. Since each respondent provided two data sets (left and right eye), 29 respondents were tested for a total of 58 data sets (eyes) per intervention group.

Using 3 different types of masks, the participants were either assigned to the surgical mask group that served as control, or to the 2 intervention groups employing non-probability sampling. The 2 intervention arms consisted of the National Institute for Occupational Safety and Health (NIOSH) approved N95 mask with exhalation valve (8511, 3M, USA) and a non-valved N95 mask (8210, 3M, USA). Each participant underwent IOP measurements in both eyes at 4 different time points on 3 separate days with at least 4 days interval using GAT. Using the surgical mask as the control, the primary outcome measure was the effect of N95 respirator mask on the IOP at different lengths of mask-wearing time and at definite time points: before wearing, 5 minutes after, 1 hour, and 4 hours.

Demographic variables were obtained, including age and sex, vital signs, and a comprehensive baseline ocular examination. The IOP measurements, performed by the same investigator twice per eye for each participant using standard procedures and the same GAT, were done without prior aerobic exercise or caffeine intake by study subjects. In standardizing the wearing of masks at each visit, the participants were not permitted to eat or drink for the duration of the examination. A standardized qualitative fit testing based on the Occupational Safety and Health Administration (OSHA) Fit Testing Protocol was performed prior to IOP measurement of the N95 masks worn by each subject. Mask size was allowed to be changed once if the participants failed the initial fit testing. Once an acceptable fit was achieved and the seal was secured, initial IOP measurement was done. The participant was asked to stay for 5 minutes for the second IOP assessment. Once completed, they were allowed to perform their respective work responsibilities and asked to return to the assessment area 50 minutes after for the third IOP measurement. Lastly, the subjects were requested to come back for the final assessment on the fourth hour. All tests were done by the same investigator, which included the initial ocular examination, qualitative mask fit testing, and IOP measurements of all time points using GAT.

The study was approved by the Institutional Review Board of the hospital and was conducted according to the principles of the Declaration of Helsinki and other relevant regulatory agencies.

Twenty-nine (29) healthcare workers were recruited. More than half were younger than 36 years. The female to male ratio was 2:1 (Table 1). 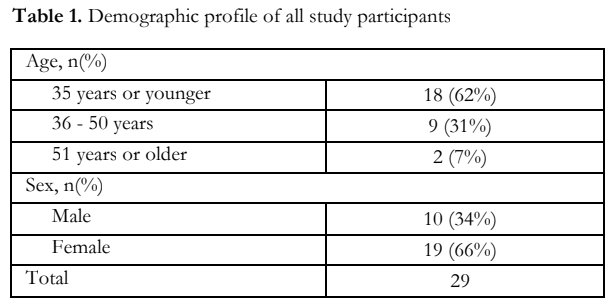 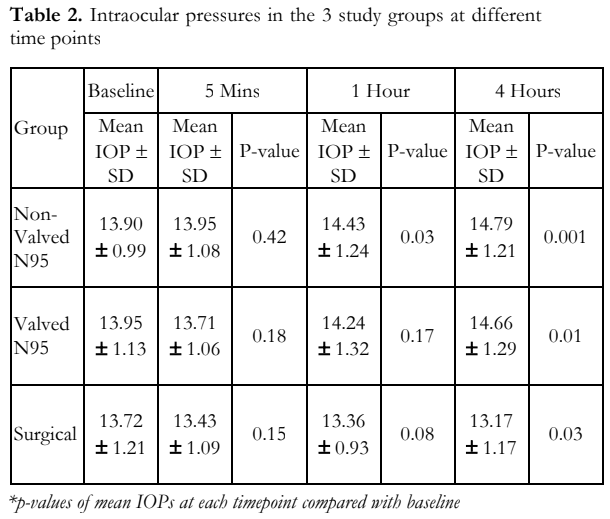 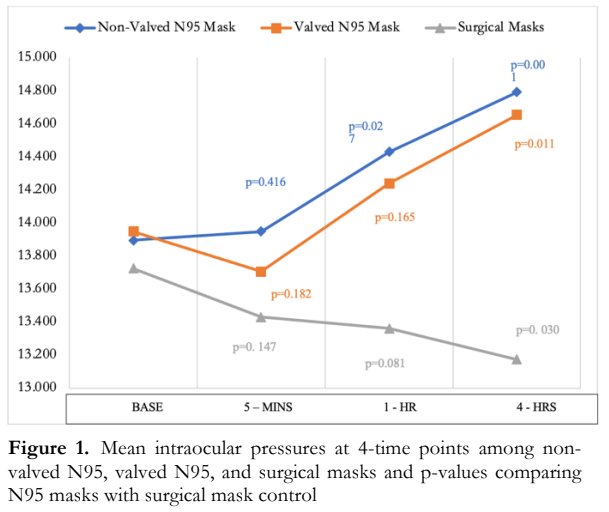 With the evolving status of infectious diseases and the increasing demand for extended and expanded healthcare services, many studies have focused on improving health systems geared toward providing a more efficient and safe environment for both patients and healthcare providers. During this time of COVID-19 pandemic, mask use is not only mandatory but also entails longer periods of use that can cause detrimental effects to users, especially healthcare workers. In this study, IOP levels using the non-valved and valved N95 masks did not show a dramatic increase even though there was statistically significant differences in the IOP levels at all time points measured when compared to surgical mask. The baseline IOPs in the three groups (Table 3) showed no significant differences, indicating homogenous eye pressures in all participants pre-intervention. At 5 minutes of mask wearing, the mean IOPs of the non-valved N95 was significantly higher compared to the surgical (+0.52 mmHg; p=0.01). At 1 hour, the mean IOPs of the valved (+0.88 mmHg; p<0.001) and non-valved (+1.07 mmHg; p<0.001) were higher compared to the surgical mask. At 4 hours, the mean IOPs of the valved and non-valved groups versus the surgical mask were further increased (Table 3). 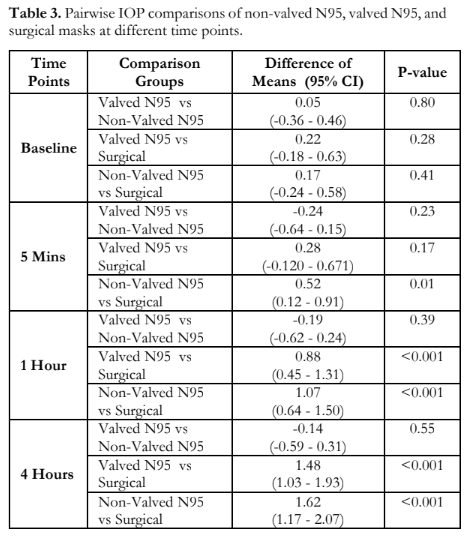 In the analyses comparing IOP differences of all treatment arms as a whole, a causative relationship between the IOP and type of mask worn (Table 4) was seen – that the IOP variations could be partially attributed to the use of the prescribed intervention wherein both the valved and non-valved N95 groups had significantly higher IOPs than the surgical group with a mean difference of 1.246 mmHg and 1.391 mmHg, respectively. The Partial Eta2 value suggested that an estimate of 28.4% of the variability in IOPs was because of face mask used by the participants. One consideration as to the mechanism of IOP increase with mask use could be attributed to the pressure and force of the mask and straps, causing compression of the periorbital area and the facial veins, similar to studies evaluating IOP levels of swimmers with goggle use that resulted to a 2.4 mmHg increase in IOP and a return to normal levels upon discontinuation.3,9 These IOP variations could also be associated with the discomfort or breathing difficulties and carbon dioxide retention that came with its use. Since the use of N95 masks caused some breathing resistance, it could influence certain parameters such as blood pressure, heart rate, and IOP. This was further explained by Roberge et al. where the physiological impacts of valved and non-valved N95 masks were evaluated.10 There were no significant physiological differences between the two groups after 1 hour of use but added effort in breathing was seen in non-valved masks which a valved mask aimed to diminish the exhalation resistance of the filter media.11 Although differences were not apparent, the oxygen levels declined from baseline in 70% of participants tested wearing respirator masks for more than 4 hours and carbon dioxide levels increased from baseline with both short and long periods of use, thereby exhibiting the presence of hypercapnia and relative hypoxia.10,12 These were further shown to affect the IOP by Mekjavic et al. who demonstrated that exercise-induced IOP elevation was exacerbated by such factors.8 Janicijevic and colleagues recently showed IOP changes in patients with primary open angle glaucoma using N95 and surgical masks during a 400 meter walking exercise.7 There was a mean difference of 1 to 2 mmHg IOP rise using N95 compared to surgical, and concluded that N95 masks could be recommended at rest for glaucoma patients but should be used with caution during exercise.7,13 The protection offered by respiratory masks is countered by possible long term physiological effects to the user with prolonged use.5 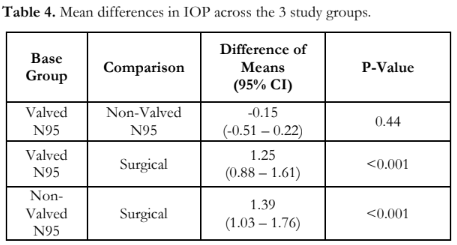 This study is an outcome of the current pandemic where mask wearing has become a necessity and not a choice. Some study limitations and research opportunities should be taken into consideration in the aim of further improving and expanding this study. Limitations of this study included operator bias and subject reliability. An authorized person other than the primary investigator can be assigned to take the baseline IOP and subsequent measurements can be performed by the investigator without knowledge of the baseline results or the study can have two separate sets of measurements for comparison and confirmation. An alternative is to use another measuring device, such as an air pulse tonometer to validate measurements taken by GAT as it corrects the IOP based on corneal thickness and corneal biochemical responses. This may improve the reliability of the results since it is less invasive and eliminates factors that may affect IOP, such as breath holding and patient discomfort. Further validation studies can be done overcoming the limits of this study and may include testing for other medical-grade masks and inclusion of study subjects with suspected or diagnosed glaucoma for further risk stratification. Furthermore, studies can include comparisons between the different types of masks along with a correlation between ease of use and IOP levels.

The results of this study showed that although there was a statistically significant increase in IOP with prolonged N95 mask use, the levels of IOP increase were less than 2 mmHg. Among individuals without glaucoma history, the increase in IOP was likely not clinically significant, which makes these masks generally safe to use. But for individuals with a history of advanced glaucoma requiring prolonged N95 use, they will need close follow-up to ensure adequate IOP control and prevent further nerve damage.

The authors would like to acknowledge Mr. Patrick Joseph Jalandoni of The Medical City Iloilo for statistical consultation and Dr. Victor Caparas, director of The Medical City Eye and Vision Institute, for allowing the use of the Eye Instrument Center and its equipment in the conduct of this study.