Nasolacrimal duct obstruction, as manifested by excessive tearing, is the greatest predisposing factor to developing dacryocystitis1, and may lead to complications, such as draining fistula, recurrent conjunctivitis, abscesses, and orbital cellulitis. External dacrocystorhinostomy (DCR) is the known gold standard for treatment of complete nasolacrimal duct obstruction, yielding a high success rate (85-99%).2-3

Not uncommon to DCR, however, are the complications that included scarring, hemorrhage, and extension of osteotomy.

The introduction of high-definition endoscopic systems enables better diagnostic and therapeutic dacryoendoscopy that not only contributes to our understanding of the disorders encompassing nasolacrimal obstruction and inflammation, but also allows us to develop minimally invasive surgical options.

Balloon dacryoplasty creates a temporary dilating effect in the nasolacrimal system without initiating inflammation, and has been found to be satisfactory as a primary treatment to acquired partial NLDO when performed after nasolacrimal probing (73%).5

While widespread acceptance of transcanalicular endoscopic lacrimal duct recanalization (TELDR) is not yet evident, we reported the preliminary outcome of recanalization through TELDR combined with balloon dacryoplasty followed by silicone stenting.

This is a prospective, interventional case series of ten lacrimal systems from eight patients who underwent TELDR and balloon dacryoplasty with silicone intubation in a tertiary hospital between January to May 2014.

The diagnosis of complete nasolacrimal duct obstruction were diagnosed with the Jones I and II tests, and lacrimal irrigation.

1. Diagnosed to have acquired complete nasolacrimal duct obstruction (NLDO) after Jones I and II dye tests, lacrimal irrigation, and probing.
2. 30 to 80 years old.

One experienced surgeon performed all of the operations after obtaining informed consent from the patients.

The procedure was mainly performed under local anesthesia using proparacaine hydrochloride 0.5% solution instilled into the conjunctival cul-de-sac for ocular surface anesthesia, followed by irrigation of 4% xylocaine in the lacrimal passage. General anesthesia was used based on the patient’s age, medical condition, or personal preference. An additional regional nerve block anesthesia (local infiltration of the medial canthal and infratrochlear area), using a mixture of 2% lidocaine with 1:200,000 epinephrine and 0.75% bupivacaine hydrochloride, was given if patient complained of pain. 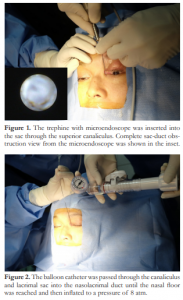 After recanalization, a balloon catheter, OphtaCath-Kit Dilatation VL (FCI, 20-22 rue Louis Armand, 75015 Paris, France) (Figure 2), was passed through the canaliculus and lacrimal sac into the nasolacrimal duct until the nasal floor was reached which confirmed the presence of the distal part of the balloon catheter in the nose. Nasal endoscopy was done to confirm the presence of the catheter within the inferior turbunate (Figure 3). The balloon was inflated to fill a pressure of 8 atm which was maintained for 90 seconds and then deflated. The catheter was pulled proximally until the 15 mm marking on the balloon was aligned with the punctum. The catheter was inflated for the second time to a pressure of 8 atm for 90 seconds and then deflated. The balloon was withdrawn up to the 10mm mark, then reinflated again to fill 8 atm pressure and held for 60 seconds, deflated and then removed. 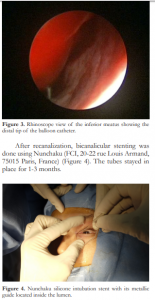 Figure 4. Nunchaku silicone intubation stent with its metallic guide located inside the lumen.

The success rate was based on anatomical patency, defined as patency on irrigation without reflux, and functional patency as exemplified by resolution of epiphora without its recurrence during the follow-up periods after removal of the stent with positive Jones tests.

Ten lacrimal systems with complete nasolacrimal duct obstruction from eight patients were included in the study. The mean age was 55.3 years (range 36 – 78 years). The stents were removed after an average of 2.28 months, with a mean follow up of 2.14 months after stent removal (Table 1). 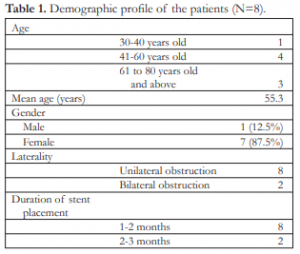 Minimal swelling was noted postoperatively in all patients and invariably resolved by the second week.

The use of microendoscope presents an alternative treatment for lacrimal outflow obstruction with a less invasive approach. After Haefliger and Piffaretti introduced its use in 20017, it is now possible to directly visualize and treat the site of obstruction in the lacrimal outflow system without altering its structural and physiologic integrity.

Patency of the nasolacrimal system was attributed to two phases. First, the mechanical removal of the obstruction with the use of a trephine that pierced through and removed the rigid obstruction, the continuous irrigation to wash out the debris from the recanalization, and balloon catheterization dilating the stenotic areas within the lacrimal system without inducing significant inflammation or crush injury,8 all were essential to assure patency. These maneuvers might be temporary; however, they allowed smoother irrigation with antibiotics and steroids postoperatively, allowing the lacrimal system the time to heal and prevented reinfection and inflammation. Maintenance of patency was also aided by the insertion of a narrow silicone stent, allowing dilation of the soft tissue (mucosal) portion of the lacrimal outflow system, and reducing flow resistance and potentially increasing flow volume. It lysed mucosal synechiae that caused narrowing of the nasolacrimal duct and allowed increased flow in unrecognized areas of valvular stenosis or fibrosis.9

The second phase was the intensive postoperative care with nasolacrimal duct irrigation of steroid-laden antibiotic eye drops during follow-up visits to reduce the inflammatory reaction that could lead to recurrence of the obstruction.

The advantages of TELDR and balloon dacryoplasty with silicone intubation were the minimally invasive technique requiring no skin incision, and no major complications seen in the current and previous investigations. The procedures could be performed under topical and local anesthesia at the office or clinic, with short recovery. As a relatively fast procedure with minimal discomfort postoperatively, it could be offered as an alternative treatment in elderly patients with complete NLDO.

In summary, transcanalicular endoscopic recanalization with balloon dacryoplasty and silicone stenting is a less invasive alternative management to complete nasolacrimal duct obstruction with a primary outcome of 100% anatomical and functional patency. Further studies with longer follow ups are needed to ascertain the effectivity and long-term benefits.