CATARACT surgery is one of the most frequently performed operations in the world, with approximately 1.5 million cases done in the United States annually.1 In the Philippines, approximately 80% of cases of blindness are due to age-related cataract.2

Endophthalmitis, an inflammatory condition of the eye often caused by infection, is a rare but dreaded complication of cataract surgery. Studying the DNA of Staphylococcus, Speaker and colleagues suggested that the most common source of infection is the patient’s own flora. Organisms may be carried into the eye as surface fluid refluxes through the wound during surgery.3 Also, an intraocular lens may become contaminated if it touches the ocular surface.4

Although there are many published papers from Western countries on the normal flora of the eye and their sensitivity pattern to antibiotics, these data cannot be applied wholesale to Filipino patients, as several factors affect the type and sensitivity and resistance patterns of bacteria. Moreover, this kind of study must be done regularly due to the dynamic nature of bacterial resistance to antibiotics.

Few local studies have been done identifying the common ocular flora present in the conjunctiva of Filipinos. The most recent by Nievera and coworkers found staphylococci, diphtheroids, Bacillus subtilis, Bacillus sp., Streptococcus pneumoniae, and Klebsiella pneumoniae to be the most common bacteria in the healthy conjunctiva.10 However, no tests of antibiotic sensitivity were performed.

This study investigated the most frequently found ocular bacterial flora of Filipino patients scheduled for routine cataract surgery at the University of the Philippines–Philippine General Hospital (UP–PGH), and determined their antibiotic sensitivity patterns to commonly used topical antibiotics.

A prospective observational study was conducted at the UP–PGH Sentro Oftalmologico Jose Rizal in accordance with the guidelines set by the Declaration of Helsinki. Informed consent was obtained from all the subjects after a thorough explanation of the nature and possible risks and benefits of the study.

The subjects were 21 years and above who were cleared and scheduled to undergo routine cataract surgery. Excluded were patients with any form of active ocular infection or inflammation, history or presence of nasolacrimal duct obstruction, history or presence of blepharitis or conjunctivitis, previous use of topical eye drops or ointment and systemic antibiotics within the last 3 months, intake of steroids or any immunomodulating medication within the previous 6 months; immunocompromised patients, any form of antecedent trauma necessitating cataract-extraction surgery, history of any form of ocular (eyeball and adnexa) surgery, and current contact-lens wearers.

Demographic data were collected from patient records. Lid-margin specimens were collected first followed by conjunctival specimens. No topical anesthesia was used. One trained person (TLC) collected the specimens with sterile gloves, cap, and mask. The upper-lid margin was swabbed with a sterile rayon swab moistened with sterile saline, employing a continuous stroke from the medial side to the temporal side. The swab was rolled to the other side and another stroke was done from the temporal to nasal side. The swab was directly inoculated onto a blood agar culture plate. The lower conjunctival fornix was swabbed separately, employing the same direction and strokes for the lid margin and directly inoculated. All specimens were clearly labeled and sent to the microbiology laboratory of Manila Doctors Hospital. Culture plates were incubated at 36.5° and checked at 24-hour intervals for growth for a maximum of 7 days. Cultures positive for bacterial growth were isolated and identified. All bacterial isolates were tested for antibiotic sensitivity and resistance using the standardized disc-diffusion method. The following antibiotics were tested: chloramphenicol, gentamycin, tobramycin, neomycin, polymyxcin-B, erythromycin, vancomycin, tetracycline, ciprofloxacin, ofloxacin, gatifloxacin, and moxifloxacin. The results were recorded.

Descriptive statistics were used for analysis of patient characteristics and for determining the most frequently isolated lid-margin and conjunctival flora. Significance of the antibiotic sensitivity and resistance patterns of the most common bacteria was determined using chi-square test with 5% level of significance.

The results of this study were similar to those of other published studies on ocular flora which determined CNS as the most frequently isolated organism.6-9 CNS, specifically Staphylococcus epidermidis, has been found to 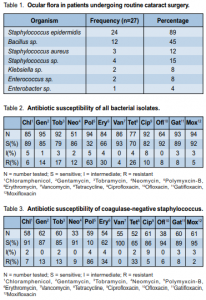 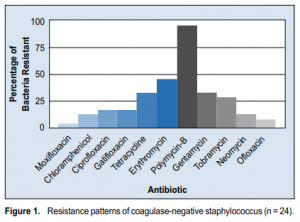 be a significant cause of postsurgical endophthalmitis.11 Antibiotic sensitivity of CNS was also in accordance with other studies that demonstrated their high susceptibility to the newer generation of fluoroquinolones.8,9 The presence of Bacillus sp. also correlated with previous findings of Arantes and Nievera.8,10 Although present, Bacillus is most likely an opportunistic organism and not a likely pathogen in postsurgical endophthalmitis.11

Further patient sampling is currently ongoing in order to strengthen the validity of the study results.

In conclusion, it is important not only for cataract surgeons but all ophthalmologists to know the most common ocular bacterial flora and the antibiotics most effective against them. This study showed that the bacterium most frequently isolated in Filipino eyes scheduled for cataract surgery at the Philippine General Hospital was the coagulase-negative Staphylococcus, which was sensitive to current commonly prescribed antibiotics. This study may serve as guide to the eye physician when choosing an antibiotic, whether for presurgical prophylaxis or in the treatment of postsurgical complications.