Disclaimer: The authors report no conflicts of interest.

Neovascular glaucoma (NVG) is a blinding  disease characterized by intraocular pressure (IOP)  elevation and anterior chamber neovascularization.1,2 In Asian population-based studies, NVG accounts  for 0.7-5.1% of all glaucomas.3,4 Locally, there is  limited available data. NVG was a common secondary  glaucoma in the two local clinic-based retrospective  studies, accounting for 7.4 and 4.8% of all glaucomas in a private and a government hospital, respectively.5,6 In another local study, NVG was more frequently  observed in government hospitals versus private  hospitals: 73.8 versus 26.2%, respectively.7 These  studies did not include detailed demographics, clinical  characteristics, and responses to treatment which  could help drive local health policies. The objective  of our study was to describe demographic profiles,  clinical characteristics, and treatment outcomes of  NVG in a tertiary public eye center.

This was a retrospective cohort study conducted  at an eye center of a tertiary, urban, government  hospital. This study was approved by the Institutional  Ethics Review Board of the East Avenue Medical  Center and adhered to the tenets of the Declaration  of Helsinki.

Medical charts of patients diagnosed with NVG  from January 2000 to August 2018 were retrieved and  reviewed. Demographic data (sex, age), risk factors,  clinical characteristics including presenting symptoms, NVG stage, baseline and final IOPs and visual  acuities (VA), initial glaucoma medications, and lens  status were collected. Description of the management  and statistical analysis were done on patients who  underwent at least one of the following procedures  and who had at least one month of follow-up after the  procedure: intravitreal bevacizumab injection (IVBe),  pan-retinal photocoagulation (PRP), trabeculectomy  with mitomycin C (trab-MMC), and/or diode laser  cyclophotocoagulation (DLCP). Primary outcome  measures were VA in the LogMAR scale and IOP.  Patients who underwent phacoemulsification during  the follow up period were excluded from the study.  The treatment outcomes of patients who did not  undergo any procedure were not analyzed.

This study included 181 eyes of 162 patients  diagnosed with NVG. Baseline demographics and  risk factors are listed in Table 1. The mean age of the  patients was 55.6 ± 14 years and majority (60%) were  males. Most patients were diagnosed with diabetes  mellitus (51%) and hypertension (38%). Diabetic  retinopathy and central retinal vein occlusion were  observed in 81 (45%) eyes and in 48 (27%) eyes,  respectively (Table 1). 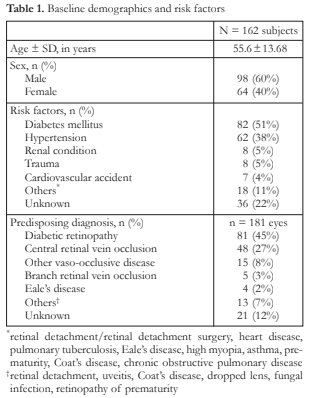 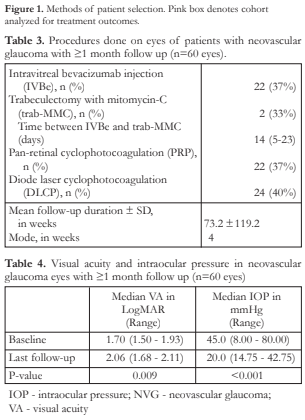 When comparing IVBe, trab-MMC and DLCP,  VA significantly declined for each group but with  significant IOP control (Table 7). Hyphema and  choroidal effusion were among the complications  noted after undergoing the procedures.

The demographics and clinical characteristics  of the patients with NVG in this study were similar  to other published studies. In Mexico, China and  Saudi Arabia, most NVG patients were male, phakic,  unilateral, with DR and CRVO/hypertension as the  most frequent predisposing conditions.1,8,9 Most  of the eyes of the patients with NVG in our study  presented in the late stage of the disease with poor  VA, high IOP, and closed-angle glaucoma similar to  the other studies.1,8,9 Thus, many eyes in our study  required end-stage procedures such as DLCP, and  consequently these eyes were not able to receive the  definitive treatment for retinal ischemia such as PRP  and IVBe.

We purposely excluded patients who had less than  one month of follow-up after the procedure or who  had cataract surgery during the procedures or within  the follow-up duration so as to remove confounding  factors that may influence the last visit VA. Subjecting  our NVG patients to procedures (IVBe, PRP, trab MMC, and DLCP) may have significantly lowered  IOP. However, VA significantly worsened in about 1  year average follow-up time. Although not included  in the analysis, the progression and complications  of concomitant retinal vascular disease due to poor  control of co-morbidities (i.e., diabetes mellitus and  hypertension) could have resulted to continuous loss  of vision. An interesting observation in the subgroup  analysis was the significant decline in VA if only a  single procedure was done compared to multiple  procedures, where the VA change was not significant.  IOP, however, whether single or multiple procedures,  was significantly lower for both. One reason for this  observation could be that those eyes that underwent  two or three procedures had already very poor  baseline vision and had reached a “floor effect” (the  baseline VA for each of the groups depending on  the number of procedures done were significantly  different, p = 0.014).

The addition of IVBe to trab-MMC in our study  failed to show any statistical difference in terms of  IOP and VA. There was an average of 14 days of IVBe  injection prior to trab-MMC which theoretically could  improve bleb morphology but has not been proven  to lower IOP. A systematic review by Simha et al.  found that there is no evidence to evaluate statistically  the effectiveness of anti-VEGF treatments, even as  an adjunct to conventional treatment in reducing  the IOP in NVG.10 Similar findings of no difference  were observed in another study where they compared  DLCP alone or with IVBe, and trabeculectomy alone  or with IVBe, respectively.11

Interpretation of results is limited by the  retrospective study design and short duration of  follow-up and significant drop-out rate. Almost half  (46%) of all the eyes did not receive any procedure  due to the high drop-out rate. Advanced NVG eyes  with serviceable vision definitely need aggressive  management more than just topical or oral glaucoma  medications to preserve vision. Sixty-three percent  (63%) of those who dropped out just received  glaucoma medications. Nineteen percent (19%)  of those who dropped out had NLP in the NVG  eye. It was also noteworthy that in our cohort of  NVG patients who had some vision at baseline and  underwent at least one procedure with follow-up  for at least one month or more, 39% of all the eyes  converted to NLP.

Our study also was limited by lack of a  standard protocol for managing this disease and the  small number of patients who underwent specific  procedures which limited our analyses. The outcome  parameters (IOP and VA) were not matched at  baseline to adequately assess the response to the  specific procedure. Furthermore, the treatment out comes were not analyzed according to the stage of  the disease. A prospective study would better assess  the efficacy of the specific procedures and would  better address the above limitations.

Since prevention is recommended by most  studies to approach NVG, a prospective cohort study  involving high-risk groups such as patients with DR  and hypertension would be worth investigating,  correlating risk factors such as glycemic and  hypertension control and instituting treatment at an  early phase.

In conclusion, NVG seen in our tertiary center  usually presented late with advanced NVG and poor VA. Most of the patients had DR and CRVO. Better IOP control was achieved with combinations of IVBe, DLCP, trab-MMC, and PRP. However, a great percentage of eyes still lost vision despite  aggressive measures. Aggressive screening for NVG among high-risk groups such as patients with DR and hypertension/CRVO is warranted to institute treatment at an early phase to prevent vision loss.

The authors would like to thank Angelica Fabillar, Philippine-based market research analyst at Euro monitor International (Singapore), for providing expert support with respect to statistical analysis and interpretation of the relevant study data.